Did you know you are standing on what is thought to be the former industrial hub of the Mohawk Valley?

Take a moment to take in the sights and sounds around you. The trees. The river beyond them. In the time around the Revolutionary War, this clearing is thought to be roughly the site of one of Little Falls’ first industries.

Built between 1722 and 1725, the Petrie gristmill which was located near this site used local water sources to serve the surrounding area for decades. You may be wondering, what is a gristmill? Gristmills were used to grind grains, such as wheat, rye and corn, into flour. After the grain was dried it was loaded into the hopper and a rod, or damsel, was used to shake the grain downward through the opening at the bottom. This hole, or shoe, led into the mill stones. The mill stones then rotated and crushed the grain between them. The grain would make its way to the outer edge growing finer as it moved. Finally, the larger pieces were sifted out with a mesh screen before the product was bagged for distribution.

So, why was the gristmill built on this site in Little Falls? One word; waterpower. This mill harnessed local water sources like the Mohawk River, just beyond those trees in front of you, and Furnace creek, which ran along what is now Furnace Street, by using a large water wheel. Water wheels are machines that convert flowing or falling water into usable power. Water wheels are often made of wood or metal and include a wheel with buckets or blades arranged on the outside which allows the water to spin the wheel as it moves through it. In the case of this gristmill, the wheel was likely made of wood and the power was channeled into the turning mill stones.

By 1782, following the destruction of other mills that were about 11 miles West in German Flatts, the Petrie mill here in Little Falls was the only one in operation in the Mohawk Valley area. As the Revolutionary War continued to wage, this mill became an important source of wheat to feed Washington’s Army. It would also become the site of an enduring tragedy.

To learn more about what happened here, please continue to the next stop on our tour located at the blue and yellow historical marker on the edge of this grassy area. 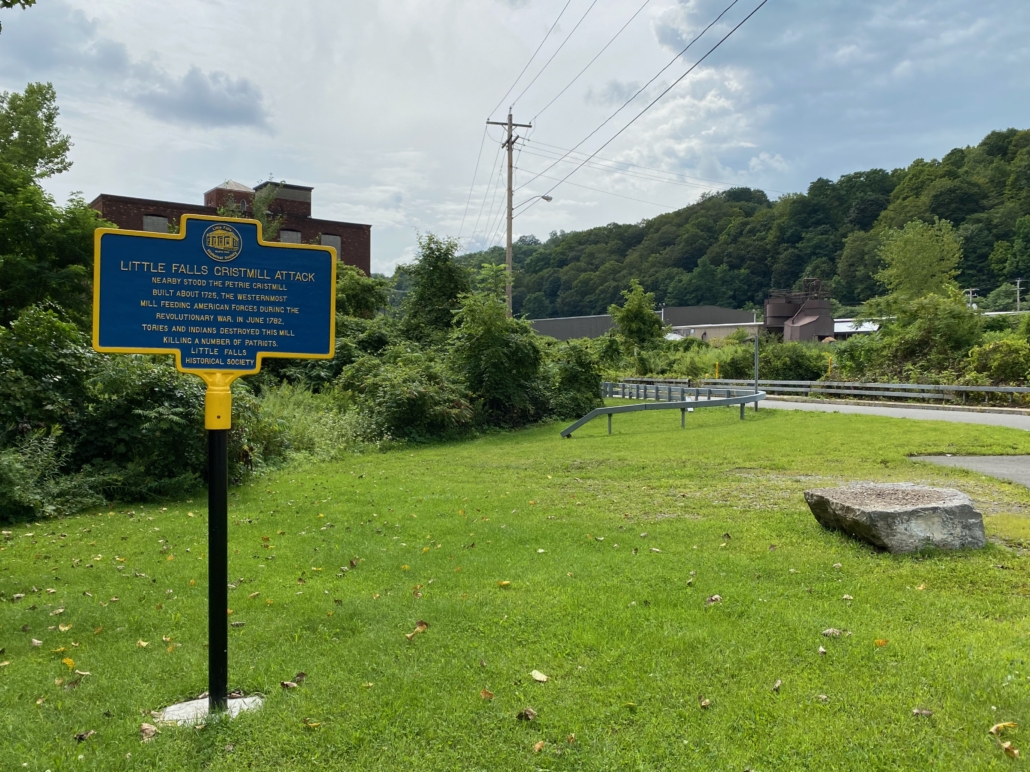