Little Falls is home to a Feldmeier Equipment factory where they produce containers for a new body disposal method called “alkaline hydrolysis”, also known as liquid cremation. Thanks to Kevin at Enea Family Funeral Home for the fun fact!

Welcome to the Little Falls Church Street Cemetery! This is the second site of Little Falls’ municipal cemetery, which moved here from its former location in the yard of the Octagon Church in the mid-19th century. In 1837, the village of Little Falls purchased this land from Richard R. Ward, and in 1842 this site opened as Little Falls’ “New Burying Ground”. Ward was specific about his desires for the cemetery and gave the village the land under the circumstances that no Catholics be allowed burial there, forcing the creation of the Catholic cemetery on Sherman Street. The Church Street location was farther away from the city’s new wooden waterworks pipes, allowing burials without fear of water contamination. This became even more important with the onset of the Civil War. During the Civil War, embalming with arsenic became an effective way of transporting bodies of those killed from the site of their death to their hometowns. In this cemetery, see if you can find the grave of Lieutenant Angus Cameron, who enrolled in the 121st infantry regiment in August of 1862, quickly rising to the rank of First Lieutenant by October of that year. Unfortunately, Lieutenant Cameron didn’t see much action in the field, as he died from Typhoid Fever in Bakersville, Maryland, on November 9, 1862. Out of the 600,000 casualties of the Civil War, approximately 40,000 bodies were embalmed. The majority of those embalmed were union soldiers who needed to be transported north. While it’s impossible to know if Lieutenant Cameron was embalmed, his place and time of death suggest the possibility. Funeral directors no longer use arsenic to preserve bodies, and advances in mortuary technology have led to increasingly safer ways to bury our dead. The Church Street Cemetery stands here as a place for generations of Little Falls residents to come and visit those who came before them. 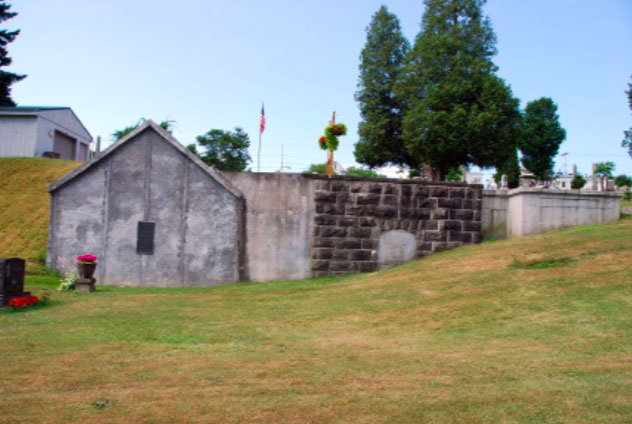