Church St. Cemetery [officially] opened in 1842. A 15-acre lot was purchased by the village from Mr. Ward. At the time, the cemetery was located outside the village with very few homes in close proximity. A wagon road entered the cemetery from Church St., and another rose diagonally from Monroe St.

Originally, the southern arm of the cemetery was reserved for the most prominent or wealthiest people.

Numerous monuments are found in this section. The northern end of the cemetery was allotted to the poor. The “colored peoples” section is in that area. The middle of the cemetery was intended for the “middle class.” Behind the present caretaker’s shed lies the “village section” or, as it is more commonly known, the “potter’s field.” Individuals that could not afford a cemetery plot, or that were under “community care,” were interred in that area.

Gravestones are sparse for the over two hundred people that are buried there.

The last interment was made in the “village section” in 1977. As time went on, little class distinction was given to the location of gravesites and the “common” people began to be interred alongside the “noteworthy.”

Be sure to download the brochure as it includes well-researched information on gravestone art symbolism, marker and fencing styles, as well as grave narratives, to help local historians and genealogists. 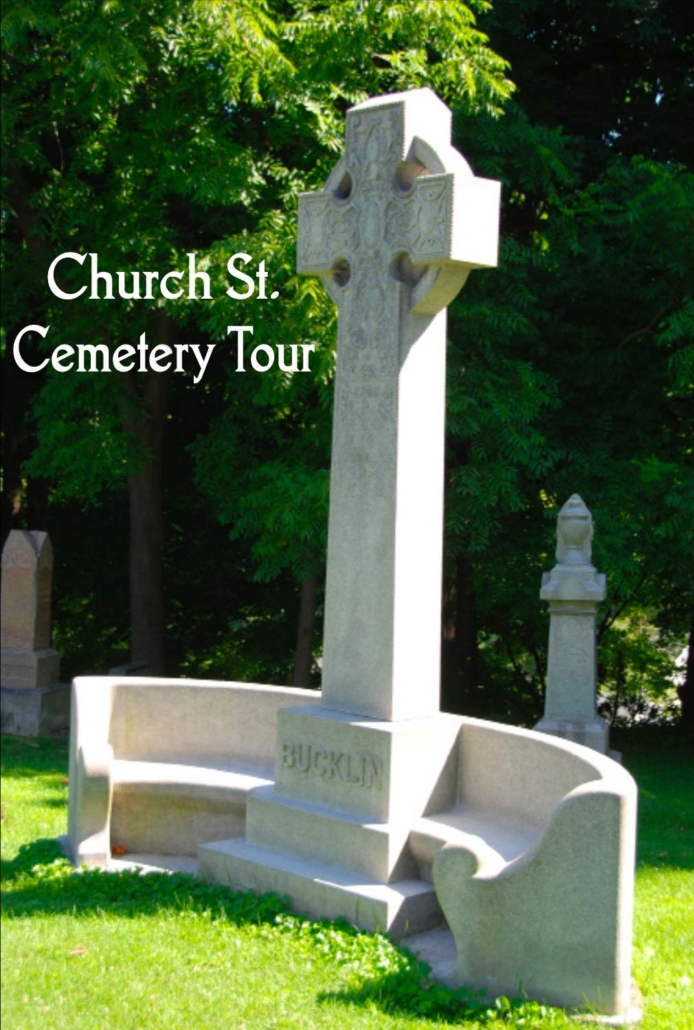 Who was the Little Falls citizen that sold the plot of land to the Village that is now the Church Street Cemetery?

The poor were allotted what area of the Church Street Cemetery for burial?

Where was “The Colored Peoples Section” located within Church Street Cemetery?

In the North End with the Poor

The “Middle Class” were buried in what section of Church Street Cemetery?

What area Of Church Street Cemetery are the “Notables and Wealthiest” buried?

Who were buried in the Village Section better known as Potter’s Field area of Church Street Cemetery?

People  in Community Care- who had no money for burial

What Creek was diverted under ground in 1931 to make burial space for the the lower section of Street Cemetery?

What year did Virginia enact Slave Codes that pertained to how slaves could interact with Citizens of the Crown?

The 15th Amendment gave them the right to vote.

Shape of a Tree Stump

What does the engraved Easter Lilly on a Marker Headstones represent?

What Tribe was a Methodist Priest named Peewaush from?

Sunday August 16 was no ordinary day in Little Falls’ Church Street Cemetery. Instead of lawn mowing and cemetery maintenance work, an extraordinary dedication ceremony took place on the hollowed ground once known as the “Colored Burial Ground.”

The unveiling of an impressive monument preceded the five program speakers. Each speaker, either directly or indirectly, addressed the cemetery’s once segregated area where City records indicate that between 1850 and 1867 alone thirty-six African Americans between the ages of two months and ninety-six years were buried.

The large area contains only a handful of grave markers.

Most of those interred there had long been forgotten until former City Historian Edwin Vogt conceived of the idea to mark the area with a monument. The combined financial generosity of Enea Family Funeral Home, Burdick Enea Memorials and the Little Falls Historical Society made the acquisition and installation of the monument possible.

Father Thomas Vail opened the program with a religious invocation. Reverend Robert Williams of Utica’s Hope Chapel of AME Zion Church then offered comments on the history of the Little Falls AME Zion Church where many from the African American community worshiped. The church was located near today’s intersection of Furnace and West Main Streets.

Historical Society president Louis Baum spoke about both the monument’s inscription and the process by which Vogt’s wished for monument became a reality. Vogt’s daughter Patricia Sklarz addressed her father’s love of Little Falls history while also expressing her family’s gratitude for the efforts and generosity that transitioned her father’s dream into reality.

Speaking last, Little Falls Mayor Robert Peters officially accepted the monument on behalf of the City of Little Falls and commented on the shared military service of all American racial groups.

The program was completed by the playing of “Taps” by longtime Little Falls jazz musician Dr. Oscar Stavala. 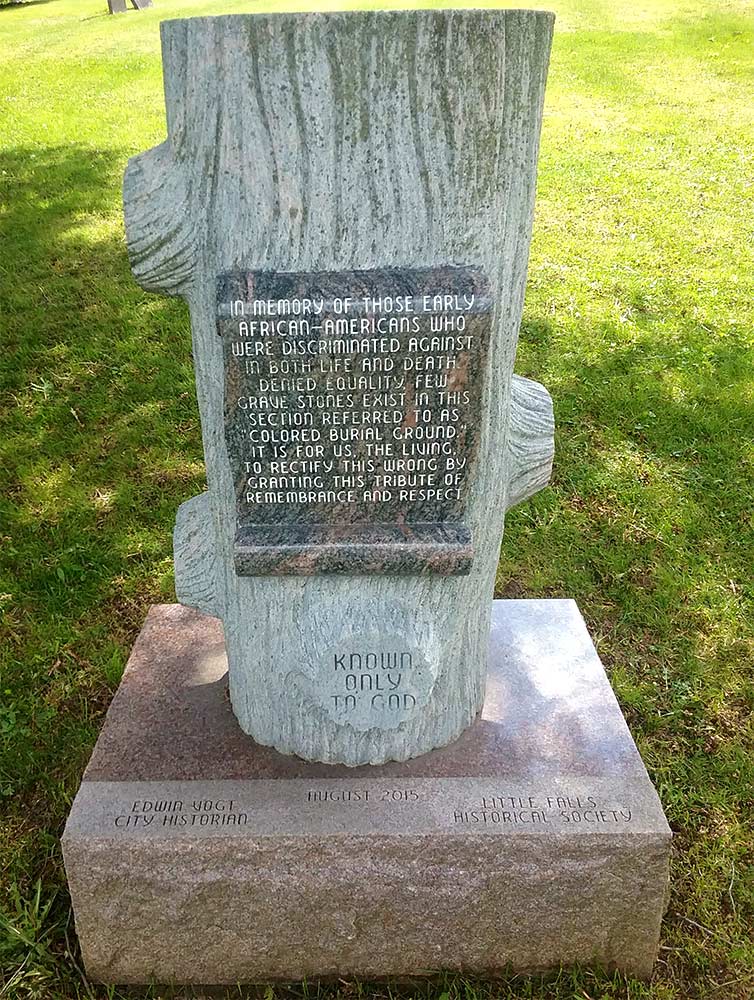 In memory of those early African Americans who were discriminated against in both life and death. Denied equality, few grave stones exist in this section referred to as “Colored Burial Ground”. It is for us, the living, to rectify this wrong by granting this tribute of remembrance and respect.

The monument can be viewed by entering Church Street Cemetery through the Monroe Street entrance closest to Arthur Street and proceeding up the interior roadway towards the caretaker’s cabin.

The “tree stump” monument is located under a cedar tree on the uphill side of the roadway.

The Historical Society hosted both the well-attended event itself and the reception that followed at their South Ann Street museum. As one attendee stated, “this was a great thing to do and a great day for Little Falls.”

Slavery and segregation were part of the dark side of America’s past.

Much progress has been made, but as a nation we still struggle with race relations.

In 1619, Virginia enacted slave codes that institutionalized slavery and “drew the color line” between whites and blacks. The Revolutionary War ended in 1783 and our Constitution was ratified in 1788. The Founding Fathers left slavery legal, every generation since has struggled with that legacy. The central paradox of pre-Civil War American history was the uneasy co-existence of slavery and democracy.

Slavery and segregation existed in America for two centuries before Little Falls became a village in 1811.

New York abolished slavery in 1833. By the time of the Civil War, there were around three million slaves in America, the national population was thirty million. Slavery was concentrated in the south, but there were also thousands of slaves in the north. Little Falls had an unknown number of slaves and free blacks prior to 1833. Free blacks still resided in Little Falls after 1833.

Either directly or indirectly, slavery was the cause of the Civil War.

On January 1, 1863 Abraham Lincoln’s Emancipation Proclamation freed the slaves in the Confederate states and following the war, the 13th, 14th and 15th amendments were added to the Constitution. In theory, African Americans became free citizens with voting rights.

In reality, antebellum slavery gave way to post-Civil War racism and legal segregation; freedom came without true emancipation. In 1896, the Supreme Court ruled that “separate but equal” was constitutional. Jim Crow segregation and prejudice lived on. Although rare in the north, black lynchings were celebrated commonplace occurrences in the south through the 1920’s: Segregated Negro League baseball teams existed through the 1940’s.

Legal segregation was not overturned until the landmark 1954 Supreme Court case Brown v. Board of Education. The Montgomery Bus Boycott and the Little Rock Nine followed.

In the early 1960’s, televised images of non-violent civil rights protestors being beaten in southern cities shocked the conscience of a nation. The 24th Amendment (no poll taxes), the 1964 Civil Rights Act and the 1965 Voting Rights Act followed. Dr. Martin Luther King Jr.’s 1968 assassination shocked a nation once more.

Racial harmony remains elusive. The dedication of a monument marking the “Colored Burial Ground” in Church Street Cemetery honoring an unknown number of forgotten black people buried therein is a reflection of community tolerance. The dedication of this monument also represents the completion of the last dream of a good man, City Historian Edwin Vogt.

The City of Little Falls, Enea Family Funeral Services, Burdick Enea Memorials and the Little Falls Historical Society have proudly united to complete this dream and to take this step at a difficult time in American history. May our community tolerance serve as an example of America’s better instincts.