The first cheese market in the United States was established in 1861 at Little Falls. From April through December local farmers, cheese factory representatives, and brokers for major American and English markets gathered at Ann and Albany Streets to sample cheeses and negotiate prices.

From 1864-1870, Little Falls was the largest interior cheese market in the world. It remained a center for cheese production well into the twentieth century. 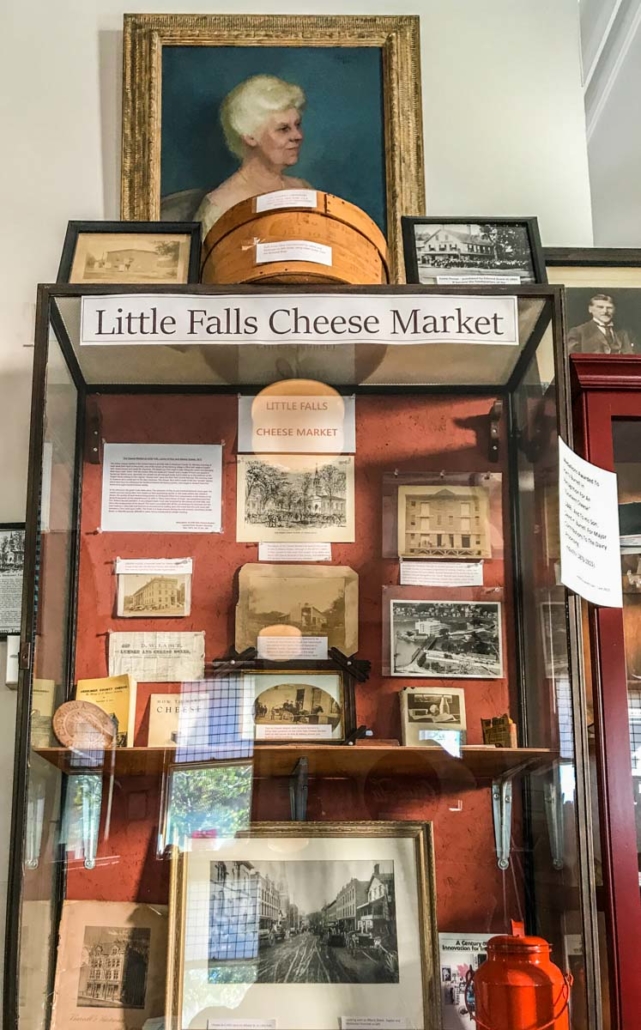 “Little Falls is the Greatest Place for Cheese…”

“The farmers bring in that article of consumption every Monday and so great is the rush that the police of the place are on duty all the time to preserve order and keep the streets free from obstructions. The cheese is shipped from here to New York and thence by vessels to the European markets. The people in the suburbs are wealthy and live in fine residences and in a luxurious manner – all from cheese.”

America’s first Dairy Board of Trade was established in Little Falls in 1871.

Essentially a producer organization, the board coordinated the sales and distribution of dairy products nationwide. It was soon emulated by other associations.

A record day for cheese

Once the farmer or factory sold the week’s production, their wooden boxes of cheese were shipped out to the processing company. On a single day in 1866 over 380,000 pounds of Herkimer County cheese were delivered to the railroad station. Double rows of cheese-laden wagons lined the street for a quarter-mile in each direction. In the course of the average season, from twenty-five to thirty million pounds of cheese were sold in Little Falls.

Where was the open air Cheese Market held?

At the corner of Ann & Albany Streets by the Museum (the Old Bank).

In 1871 what was the purpose of the Dairymen’s Board of Trade who held their meetings at the Evan’s House?

To support Dairy Farmers and set the prices & Transport the cheese.

What mode of communication was used for the Dairymen’s Board of Trade to set prices for cheese in Markets in New York and England?

Little Falls: Cheese Capital of the World by Diane Ptak

During one episode of “Seinfeld,” George goes on and on about how his life could not be more perfect.

Sheltered in a deep curved gorge along the main transportation route across New York, Little Falls became a manufacturing leader in the latter half of the 19th century.

The picturesque village was famous for its Herkimer County cheese throughout the United States and England. In 1860, nearly 11 million pounds of cheese were sold and shipped out of Little Falls. If bars of cheese were lined up side by side, they would have nearly reached from Little Falls to Albany and back! By 1871, that production grew more than six times to 68 million pounds, including exports to England.

For years, the dairy farmers of the Mohawk Valley either sold their cheese door-to-door or by word of mouth, or they might engage a cheese dealer who would visit each farm, negotiate the price and possibly advance a token amount of payment. Some dealers were fair, but others developed a reputation of being less than honest. Many buyers found it easier to meet the cheese vendors in town and then take tastings. Soon, Little Falls became the center of the cheese market. Beginning in 1861, Little Falls had an open air Monday market at the intersection of South Ann and Albany streets.

With the Industrial Revolution steaming ahead, the big cheese players gathered at the Evans House, across from the railroad depot, for the first meeting of the New York State Dairymen’s Board of Trade meeting on July 10, 1871.

Their primary purpose was to support the dairy farmers, and to determine the best methods to move their Herkimer County (mainly cheddar) cheese from the farmers to the buyers, while maintaining its freshness and taste.

The Evans family had purchased what would be the Evans House in 1869. The famous opera singer, Jenny Lind, was said to have performed there in 1851 and President-elect Abraham Lincoln had greeted the crowds on a brief railroad whistle stop in Little Falls in 1861. Following President Lincoln’s assassination, residents lined the tracks to pay their respects as Lincoln’s casket passed through the village on it way home to Illinois.

Having immigrated to the Mohawk Valley in 1848 from humble origins in Wales, William and Jane Evans and their son, Edward, had arrived in Little Falls in 1856. In the Evans’ rural hometown, artisans and farmers would bring their wares to the Tudor timber-framed Old Market Hall on Mondays. Area residents gathered to socialize and with a few shillings, buy or barter for cheese, butter, merino wool and vegetables. When in Little Falls, the Evans family envisioned that, by collaborating with prominent members of the agricultural community, the newspapers and the New York City dairy dealers, Little Falls could become the market town for the dairy farmers of the Mohawk Valley and later serve as a model for other New York communities.

NYS Dairymen’s Board of Trade meetings were held in the elegantly appointed ballroom of the Evans House. In 1871, a telegraph line was already strung from the Evans House to the nearby railroad depot. The Dairymen’s Board of Trade had a trading board in the ballroom only open to members. Upon arrival each cheese vendor would post their volume of cheese available for sale. The Evans’ telegraph link with New York City (and Europe) allowed for on-time market cheese per pound prices and volumes to be displayed on the board. This included the price of cheese in New York City, as well as at markets in London and Liverpool, England.

By working together, Mohawk Valley dairy farmers had leverage when negotiating with powerful New York City and Philadelphia cheese dealers.

Dealers’ practices of buying cheese on credit and offering cheese prices significantly below market price would now be exposed! The only surviving panoramic photograph of the first New York State Dairymen’s Board of Trade meeting in 1871 captured the excitement of it all. Center stage stood 33-year-old Edward W. Evans, shaded under his bowler hat. With perfect posture he was a mere 5-feet 4-inches. Others surrounded him standing tall, with dealers in top hats on the elevated landing of the Evans House; his parents and wife, watching from second story windows. Additionally, hundreds of Mohawk Valley cheese producers had gathered, some with their cheese delivery wagons, for this historic moment. They were there to recognize a new era in cheese marketing.

That day was a grand new beginning when the cheese world would look to Little Falls, a village of only 4,818 in 1860. Little Falls was shipping millions of pounds of cheese yearly. The collaborative efforts of the Evans’ and Mohawk Valley dairymen/women had catapulted Little Falls to the Cheese Capital of the World.

Diane Ptak is a member of the Little Falls Historical Society. This article was abstracted from a book to be published by the author next year. The proprietor of the Evans House, 1869-1908, Edward W. Evans, was the author’s great grandfather. The hotel, at 332 S. Ann St., was on the site of the present day Travelodge hotel.

This article was published in the Times Telegram July 12, 2018.