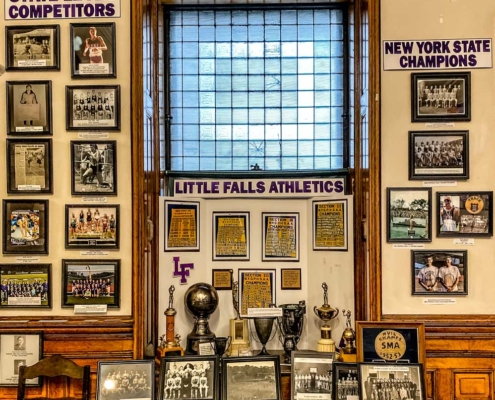 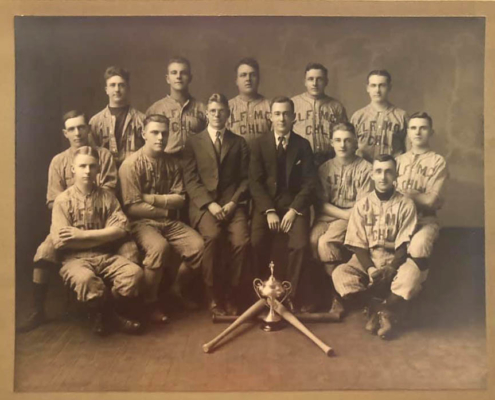 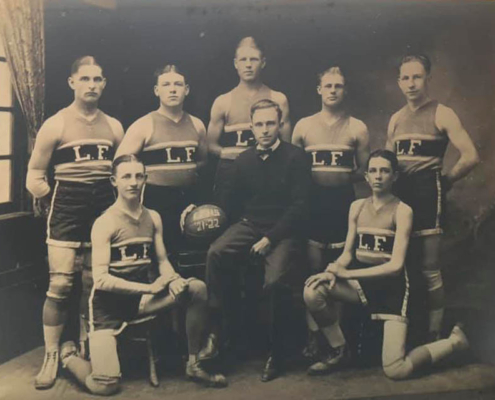 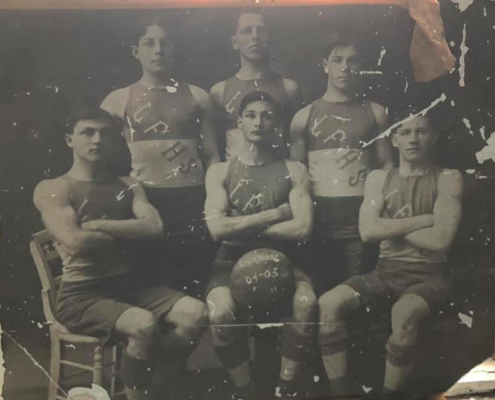 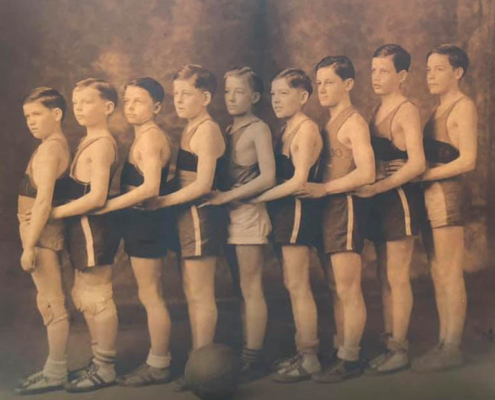 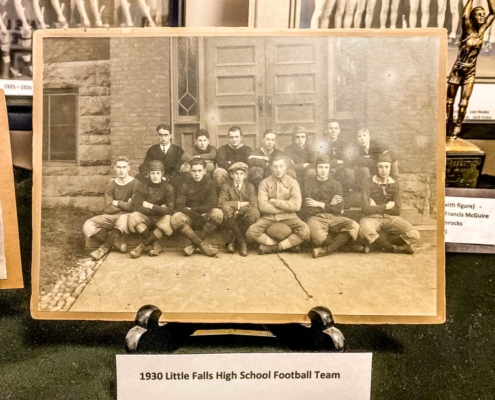 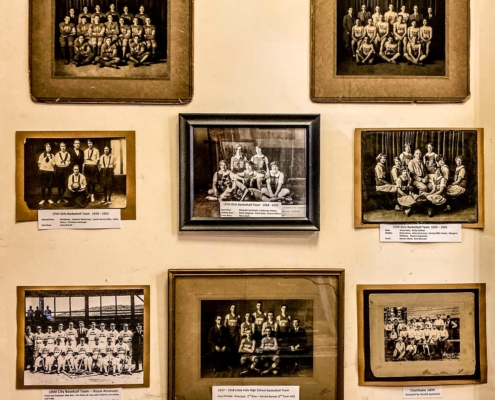 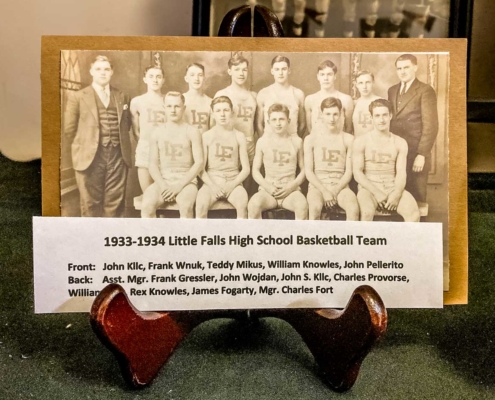 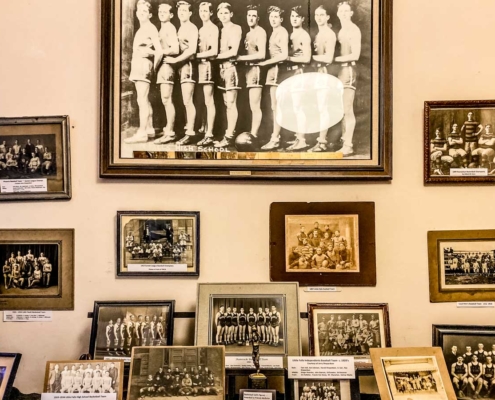 The first, and arguably greatest, of these championships was brought home by the Wilbur Crisp coached boys’ basketball team in the 1929-30 season. Following tournament victories over Syracuse Central, Oswego, Binghamton and Kenmore, the championship game was played in Syracuse’s Archbold Gymnasium where the local five emerged with a 25-9 victory over Cohoes. Sam Mucica was the team captain, leading scorer and all-state center.

A seven-minute vintage home movie captures the ghost-like images of both the parade that greeted the victors at the city’s western entrance and a student and faculty assembly in Eastern Park (Ward Square) honoring the team that included a simulated jump ball being tossed in the air by Coach Crisp. Copies of this classic video are on sale at the museum.

Crisp was inducted into the New York State Coaches Hall of Fame in 1979; the Benton Hall gymnasium had been earlier dedicated to Crisp in 1968.

This state All Class championship was all-the-more remarkable in that there was no allowance for school size in the state tournament in 1929-30; schools of all sizes competed in the same tournament. Remarkable!

Fifty-two years later in 1982, the Ted Schoff coached boys’ baseball team defeated Norwood-Norfolk 4-3 in the regional final. The local nine then captured the New York State Class C-D championship on their home field at Veterans Park by defeating Bishop Coleman 2-0 in the semifinal game and then Wilson 12-5 in the championship game later that same day.

The team capped off their amazing tournament run despite not winning their league championship. The hitting stars in the semifinal and final games were Gary Mizerak, Corky Demeree and Brian Rohacek, while Joe Morrotti’s pitching heroics, including being the winning pitcher in both the semifinal and championship games, earned him tournament MVP honors.

The home team dugout at Veterans Park is named for Coach Schoff and he is also a member of the Mohawk Valley Baseball Hall of Fame.

Let’s switch from the basketball hardwood and baseball diamond to the track and field oval for two individual Little Falls New York State Class C-D champions, Tess Malone and Brian Mosher. Both athletes were exceptional sprinters for the purple and white.

And in 2000, Little Falls native Brett Wehrum and German foreign exchange student Florian Andreas teamed together to capture the New York State All Class tennis partners’ championship at the U.S. Tennis Complex in Flushing on Long Island. The Dave Talaba coached partners won a straight sets (6-2 and 6-2) victory in the semi-final over a pair from Garden City, a much larger school from Long Island.

In the finals, the unseeded Wehrum and Andreas were matched against the tournament number one seeded pair from Manhhasset. The Class C Mountie tandem ground out a 6-1 and 7-6 (7-2 tiebreaker set) victory over the top seed from another much larger Long Island school.

Between 1930 and 2019, five New York State championships were brought home by some of Little Falls’ finest athletes, most competed on teams, two as partners and two as individual performers; Little Falls’ most decorated athletes and teams.

The 319 S. Ann St. Old Bank Museum is open on Tuesdays through Fridays from 1 to 4 p.m. and on Saturdays from 9 a.m. to noon. There is no admission cost. Please stop by and enjoy these and other exhibits.

View the writing series on the Times Telegram.