Destruction, revenge, timely reinforcements, and a reversal of outcomes, the October 19, 1780 Battles of Stone Arabia and Klock’s Field had it all when it came to local Revolutionary War drama. This article breathes new life into these long ago consequential events. 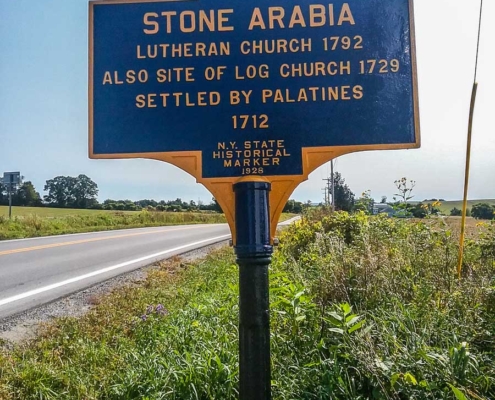 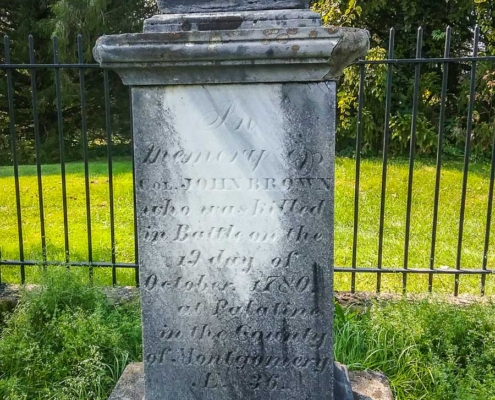 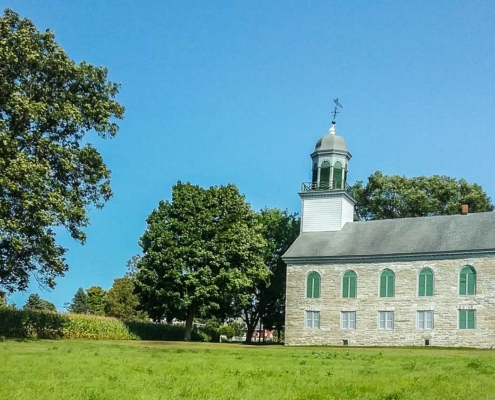 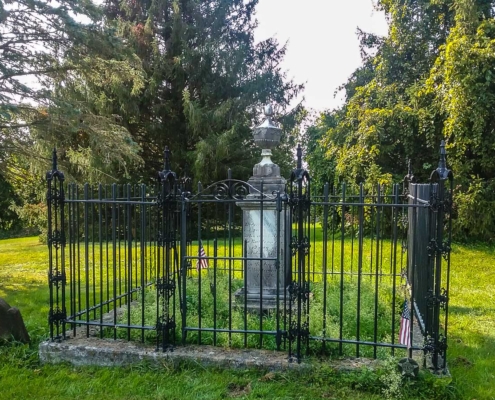 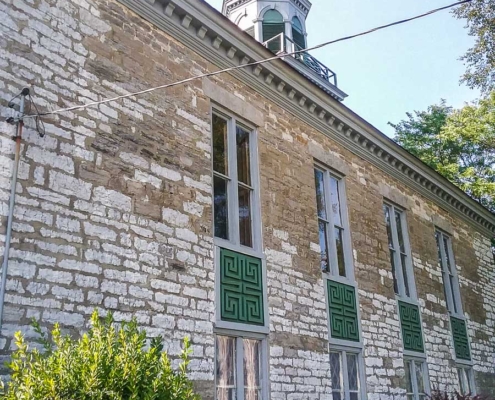 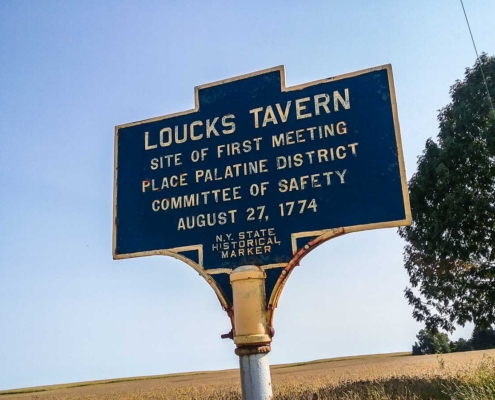 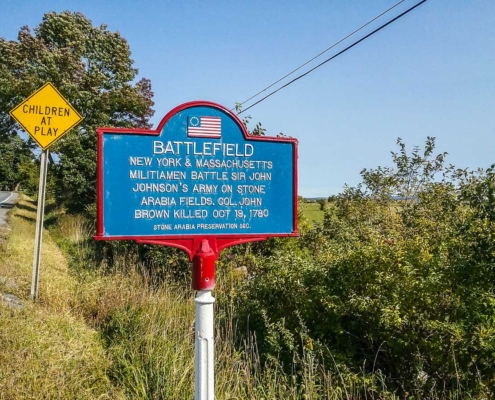 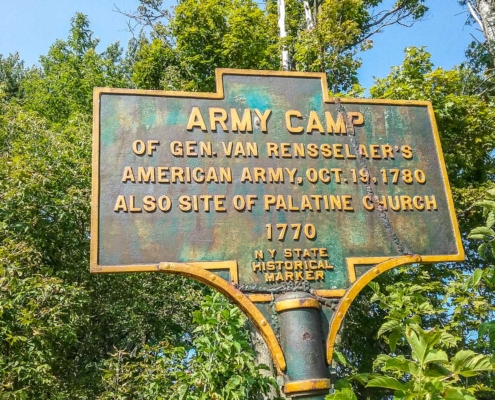 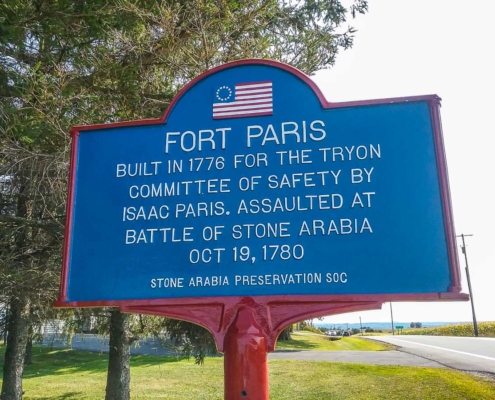 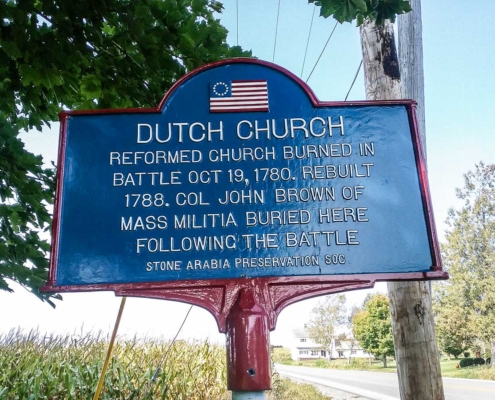 Dozens of barns and houses lay in smoking ashes. By mid-October 1780, the British campaign of destruction in the Mohawk and Schoharie Valleys carried out by the combined forces of Lieutenant Colonel Sir John Johnsons’s army of Regulars, Loyalists and Indians, Indian Chieftain and Captain Joseph Brant’s Volunteers, and Butler’s Rangers had laid waste to “everything except the soil itself” in a twenty mile wide swath from Fort Hunter in the Schoharie Valley to Stone Arabia north of Palatine Bridge. This was the fourth year of such destruction.

As Johnson ‘s army neared the end of its rampage in Stone Arabia, Captain John Brown’s force of 380 Patriot volunteers sallied out from nearby Fort Paris thinking that they were in pursuit of a smaller Loyalist force. Instead, Brown and his Massachusetts’ Levies, New York Militia and Rangers stumbled into an ambush of around 900 Loyalist troops. The ensuing battle was brief. Brown and 29 other Patriots lay dead. Today, many of their bodies are interred about a mile from the battlefield in the burial grounds behind the Stone Arabia Dutch Reformed Church (1788).  These graves still evoke strong emotion.

After burning two churches at Stone Arabia, the British confident forces moved southward toward the Mohawk River where a different fate awaited them.

Burning churches at Stone Arabia was in part revenge for the August 27, 1774 meeting of members of the District of Palatine, of the County of Tryon at nearby Louck’s Tavern that produced a historic document stating that these Patriots would join with other districts to defend their rights and liberties. This document preceded our July 4, 1776 Declaration of Independence by nearly two years.

Moving to intercept the Loyalist force was a combined army of around 900 Patriot militia men and 50 Oneida Indians under the command of Brigadier General Robert Van Rensselaer; the Indians were led by Chief Louis Atayataronghta.  The Loyalists and Patriots were two armies in search of a battlefield.

The Patriots followed the trail of burning buildings and divided into three columns near St. Johnsville. Van Rensselaer’s army had marched all night and into the day without proper food or rest and they would soon be positioned to cut off the retreat of Johnson’s forces.

The engagement commenced in the late afternoon on Sheldon Klock’s farm and a running battle ensued from Failing’s Orchards or Nellis Flatt on to today’s area south of Hansen’s Aggregates rock quarries and west of St. Johnsville at Klock’s Field or Fox’s Mills.

Colonels Lewis DuBois’ and John Warner’s columns engaged in intense fighting with Johnson’s forces. The weight of the battle that began at Stone Arabia turned in the Patriots’ favor at Klock’s Field. As darkness fell, Van Rensselaer realized that in the smoke-shrouded din of battle, his left and right flanks were firing at one another and he ordered his left column to fall back to the farmhouse of John Klock near Timmerman’s Mill.

The intense battlefield smoke, the onset of darkness, and soldier fatigue allowed for a precipitous escape for Loyalist forces across the Mohawk River at King Hendrick’s Ford near today’s lock 16 at Mindenville. Loyalist forces had to cross the river to avoid Fort House and Fort Windecker on either bank of East Canada Creek north of the Mohawk.

Johnson may have lost forty-eight men and forty were taken prisoner while the Patriots lost eight men at Klock’s Field and thirty-eight for the day. Johnson’s troops also abandoned munitions and supplies as they fled.

Van Rensselaer’s forces had marched and fought for twenty-six straight hours almost without break. Their heroism cannot be overstated.

Our ancestors defended the lands that they had taken from the Iroquois Indians parcel by parcel and broken treaty by broken treaty. The Loyalists never regained possession of their former lands in the Mohawk Valley and most resettled in Canada.

In the overall scope of the Revolutionary War, these two battles were relatively small-scale engagements, but the local impact was immense. For four years various combinations of Loyalist, British and Indian forces had laid waste to the Mohawk and Schoharie Valleys.

The Battle of Johnstown and more limited raids did take place in 1781, but far less destruction occurred; on October 30, 1781 the much-hated Tory Walter Butler was killed near today’s Hinckley Reservoir in the Town of Ohio.

In the aftermath of battle, Brigadier General Robert Van Rensselaer decision to disengage from further fighting in the darkness and smoke that had enveloped Klock’s Field resulted in suspicion and eventually a court martial trial on cowardice and treason charges. Various officers, scouts, guides, and aides testified at his trial. It was determined that soldier exhaustion was the primary reason why Van Rensselaer’s troops were unable to pursue Johnson’s fleeing force. The court “could discover no want of personal bravery in the accused.” Van Rensselaer emerged from the trial with his reputation intact.

The October 19, 1780 Battles of Stone Arabia and Klock’s Field have faded into lore, but on this 240th anniversary, let us remember anew and bow our heads in respect for the courage of our ancestors who fought on that day.

Jeffrey Gressler is a member of the Little Falls Historical Society. This article was also published on the Times Telegram and MyLittleFalls.com