Originally an 1833 bank, the building where The Little Falls Historical Society Museum is located was converted and restored to house thousands of artifacts, family records, and relics of the past. The museum is an educational, eye-opening experience, suitable for all ages.

About the Little Falls Historical Society 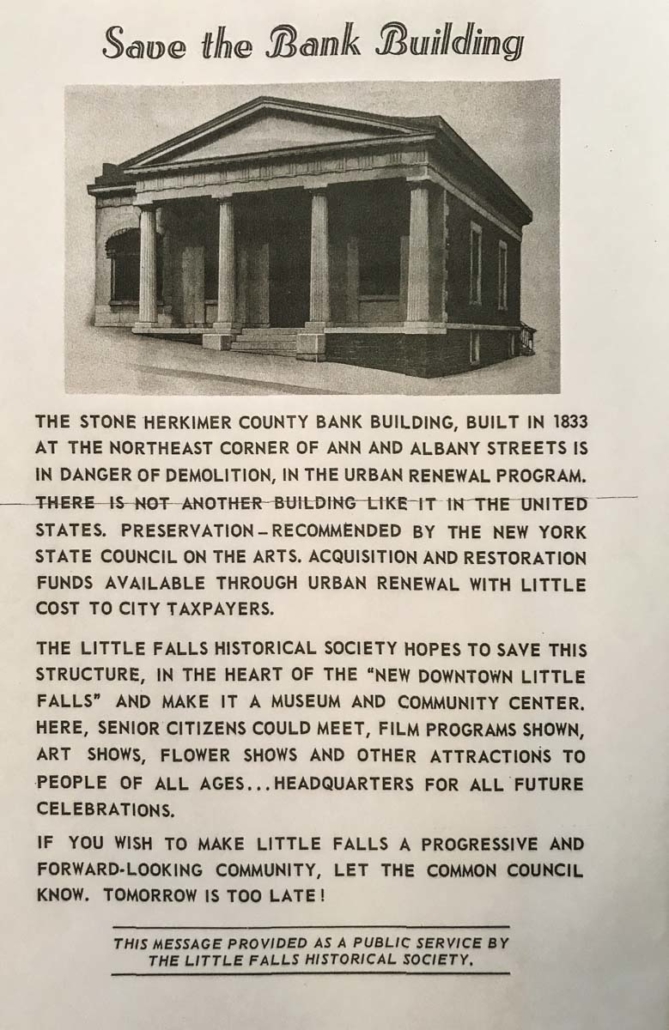 “This museum exists to discover, collect, display and conserve data, documents and artifacts that are a part of the history of Little Falls and to maintain an institution on educational usefulness.”

The Little Falls Historical Society Museum is located in the stone Herkimer County Bank building, built in 1833 at the northeast corner of Ann and Albany Streets. The building was purchased by Urban Renewal in 1964 and was slated for demolition to become a parking log for a new bank.

Little Falls citizens interested in the city’s history fought hard to prevent the historic structure from being demolished.

The building was placed on the National Register of Historic Places in 1970 – one of the first in the area to be so honored. Purchased by the Little Falls Historical Society in 1977, it was carefully restored to its present grandeur over a seven-year period and, since 1985, has served as the depository for the society’s collections.

OLD BANK BUILDING MUSEUM WILL BE OPEN TO THE PUBLIC ON A BY APPOINTMENT ONLY BASIS BEGINNING JUNE 1, 2022.

Museum visitation appointments can be scheduled by calling either:

*PLEASE BE ADVISED THAT IN ORDER TO SCHEDULE A MUSEUM VISITATION APPOINTMENT, YOU MUST BE WILLING TO:

1. Provide proof of COVID vaccination and booster.
2. Wear a high-quality, non-cloth mask at all times while inside the museum.

Appointments are limited to four people plus museum volunteer docents.

THANK YOU FOR FOLLOWING THE ABOVE GUIDELINES.