How is it that Little Falls residents, when asked from where we hail, answer Little Falls and not Rockton? And how did our forefathers use their First Amendment rights to make that happen? Not sure? Read on.

What Amendment of the Constitution did “Q” use to write an article to the Mohawk Valley Courier Newspaper stating that the name Little Falls had outlived its usefulness and proposed the name Rockton should take its place in 1851?

Why was the name Rockton changed back to Little Falls after two short years of use in 1853?

Little Falls mail being sent to a Post Office in Rochester, NY 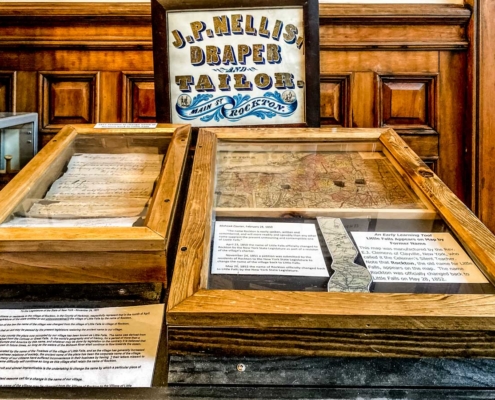 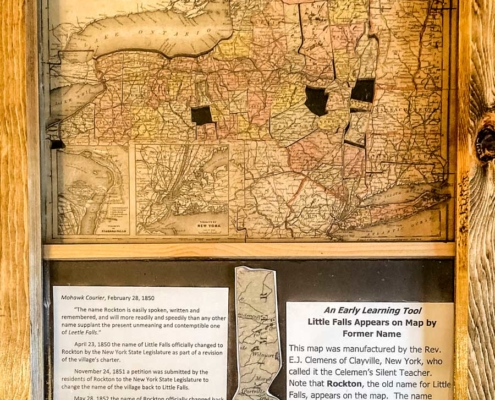 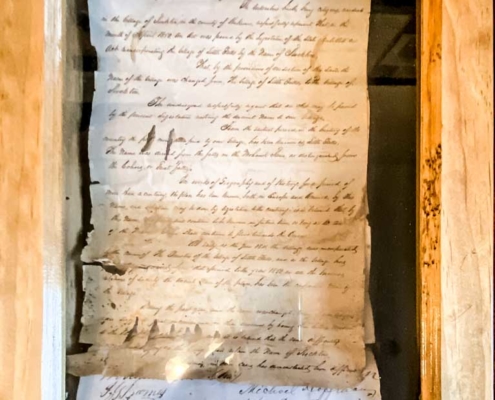 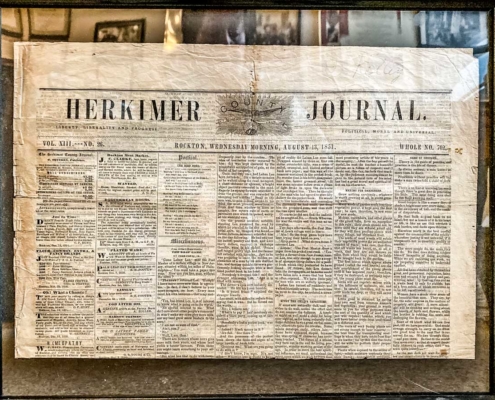 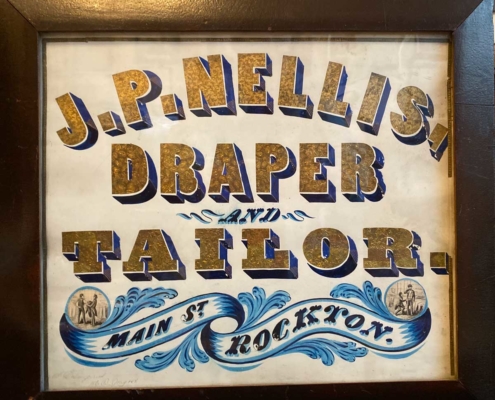 How is it that Little Falls residents, when asked from where we hail, answer Little Falls and not Rockton? And how did our forefathers use their First Amendment rights to make that happen? Not sure? Read on.

Most Little Falls residents are familiar with the name Rockton and some know that Little Falls was officially known as Rockton at some point in our past. The purpose of this article is to examine the historic process and events that led our 1850′s era ancestors to decide to change our village name to Rockton and then back to Little Falls while also examining how their First Amendment rights were used in this process.

The catalyst for this reexamination was the discovery of an important 1851 document central to our community identity that emerged from the Little Falls Historical Society Museum’s archives a few months back. This pre-Civil War 500 plus signature petition is part of a 2019 museum exhibit which will be discussed later in this work.

The First Amendment’s protection of free speech and free press and the right of citizens to petition their government “for the redress of grievances” all played crucial parts in this name change history.

How was it that our village government decided to change our name from Little Falls to Rockton and then back to Little Falls again in two short years?

A Feb. 28, 1850, Mohawk Valley Courier newspaper article expressed a sentiment that was apparently shared by other Little Falls residents at that time.

This article’s author, identified only as “Q,” made the case for the Little Falls to Rockton name change. This effort coincided with the creation of an updated village charter, an act that required New York State Legislature approval. “Q” presented two major arguments. First was that the name Little Falls had outlived its usefulness. “Q” stated that the historical purpose of the name was accurate and useful geographically as it was traditionally meant to distinguish the major falls or “carrying places” on the Mohawk River. Cohoes, 70 miles to the east of Little Falls, was known as the “great falls” in comparison to our smaller falls.

Secondly, “Q” reasoned that the name Little Falls gave a “diminutive” first impression of the growing prosperous town. “Q” went further by proposing the name “Rockton.” Geographical features were once again cited for that new name. The village’s Mohawk River location surrounded by rock walls would also convey a sense of steadfastness and strength and would neither “begrand” nor “belittle” the image of the village. Extensive research does not reveal how much influence “Q’s” article had or what transpired following its publication, but the charter was submitted and Rockton we became in early 1851.

Low and behold, less than a year later an effort began to return the village name to Little Falls. This effort culminated in the submission of the aforementioned petition to the state Legislature in November 1851 signed by 500 plus village residents.

It is interesting to note that the arguments to both change our name to Rockton and then back again to Little Falls cited the area’s geology. The second group of petitioners adopted a more positive view. Citing our history as a second carrying place around Mohawk River rapids, the petitioners stated that we had been known as Little Falls for over a century in both Europe and America and thus that name should be preserved.

Language from the petition itself is also of interest. Citing practical reasons, it states: “During the past year since the name was changed many of our citizens have suffered inconvenience in their business by having … their letters mis-sent to the post office at Rochester, it is believed that the same difficulty will continue so long as the village shall retain the name of Rockton.” In other words, the frustrations resulting from the use of the new name resulted in citizen inconvenience. Mail was being sent to Rochester rather than to Rockton.

This 1851 petition along with a number of other “Rockton era” artifacts are part of a new exhibit at the Little Falls Historical Society Museum. One artifact is a very rare 1850′s era puzzle map used to teach New York state county locations; Rockton, rather than Little Falls, is shown on the Herkimer County puzzle piece. Another beautifully preserved 1850′s era artifact is a framed advertisement from a Main Street tailor named J.P. Nellis stating that the business offered both draper and tailor services. The exhibit also includes an Aug. 13, 1851 copy of the Herkimer County Journal newspaper with Rockton in its byline. Collectively, these nearly 170-year old artifacts preserve a most unique part of our community history.

Other items of interest from this same era have also recently come to light.

Although “Rockton” is part of our past from the 1850s, the name has endured into present times. The current Fall Hill Bead and Gem Shop is located in the building that earlier housed both Walt’s Grill and The Rockton Café. And, of course, Rockton Plaza is the prominent nine-story residential structure on Albany Street.

Furthermore, in 2007, Little Falls native Cal Courtney established two businesses connected to his funeral home business in Walton, New York. The first was a laser-engraving business named “Rockton Equipment Co., LLC” and the other was “Rockton Real Estate, LLC.” Courtney recently stated: “I used these names because I thought that it would be kind of cool to reach back to my roots.”

And so, these events of over a century and half ago have been given new life by both the museum exhibit and this article. This author extends a note of gratitude to top researchers Louie Baum and David Krutz for their assistance. Additionally, First Amendment rights and protections played a key role. “Q” used freedom of speech and the Mohawk Valley Courier used freedom of the press.

Although the previously mentioned petition may be quite different from the online petitions for various organizations and causes that we encounter and sign, the spirit and purpose remain the same. The right “to petition government for a redress of grievances” is central to a democratic society in order to make our names and wishes known to elected officials to help them faithfully fulfill their roles as representatives of “We the People.”

The spirit of confidence and citizen involvement that motivated our 1850′s era ancestors to seek a new name and identity continues to exemplify our community.

This article can also be viewed on the Times Telegram. 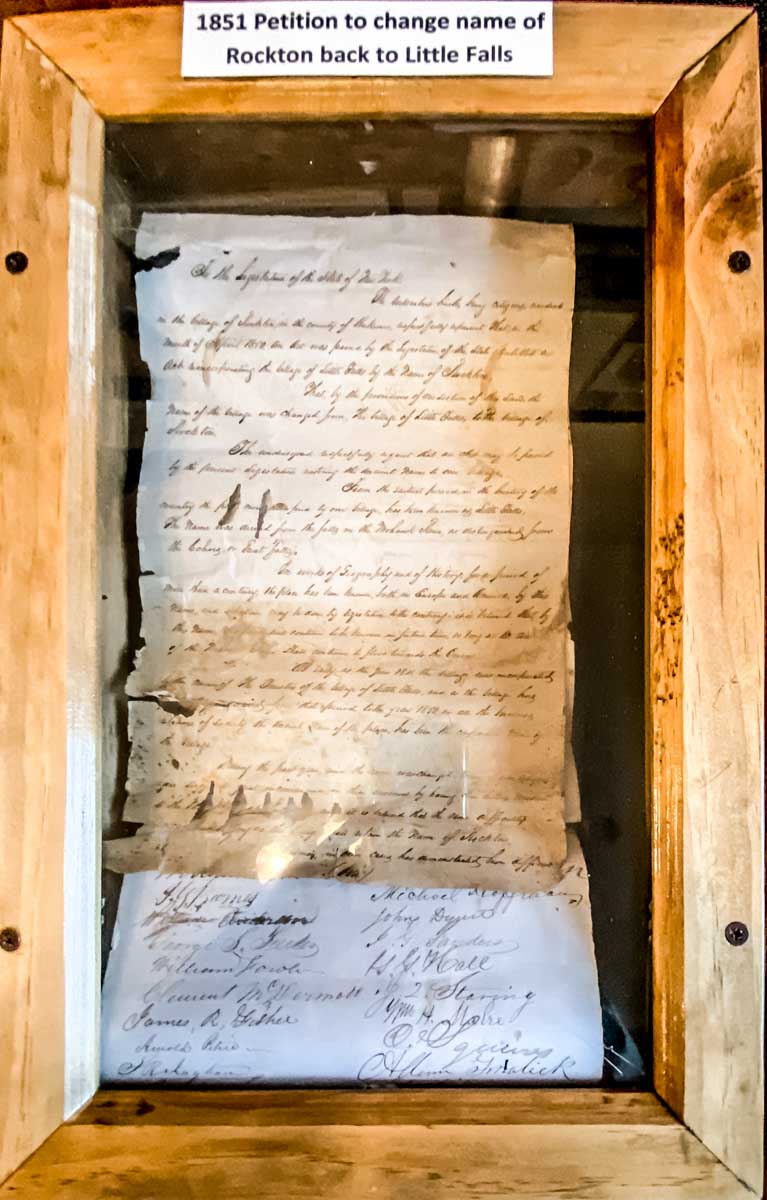