Thomas Jefferson’s 1776 Declaration of Independence proclaimed all men as equals, but our Founding Fathers left the horrors of slavery unsettled and the status of women unequal in the United States Constitution. Abagail Adams’ plea to her husband to “remember the women” went unheeded.

What does Women’s suffrage mean?

Who were the two women that formed a partnership that fought for Women’s Rights and formed the National Women’s Suffrage Association?

In 1870 what Amendment to the Constitution was ratified to include all races, color and no barring on previous condition of servitude but still excluded women?

Who was the Little Falls Citizen that opened her home for meetings for the Women’s Suffrage cause?

Who was the English women that first got Women’s Suffrage out in the media for other Suffragist to follow?

In 1916 the imprisoned Members of the National Women’s Party caused a nightmare for what President?

Who was the first female Congresswomen for the State of Montana in 1916 who passed a Bill that eventually turned into what Amendment of the Constitution in 1920?

Janette Rankin was the Congresswoman for the 19th Amendment.

When were African American men and women given the right to vote? 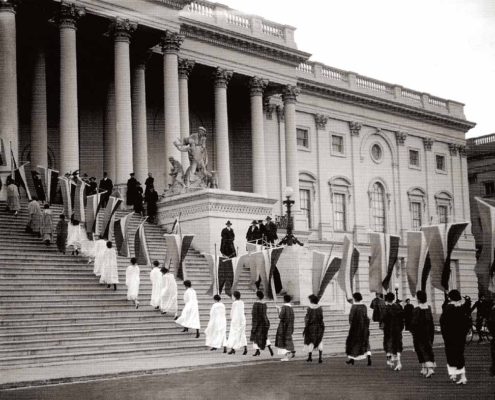 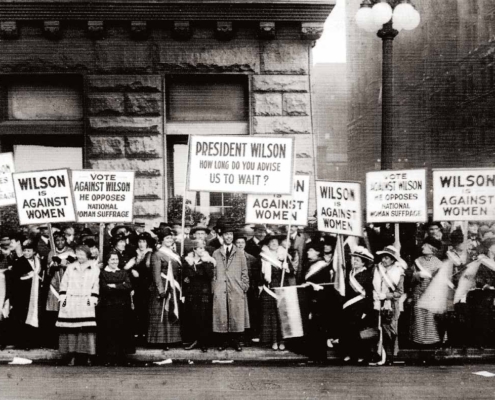 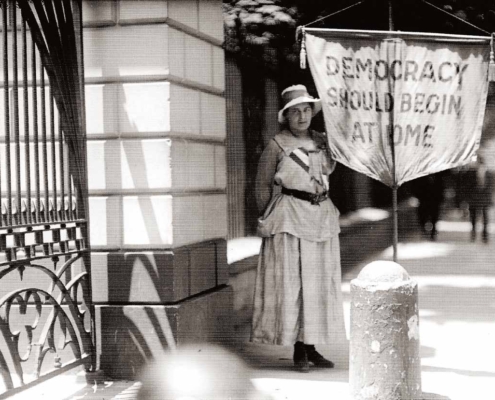 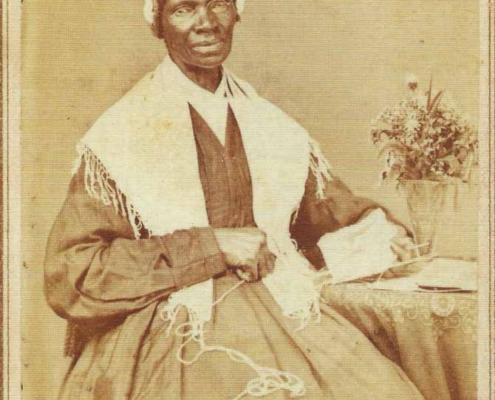 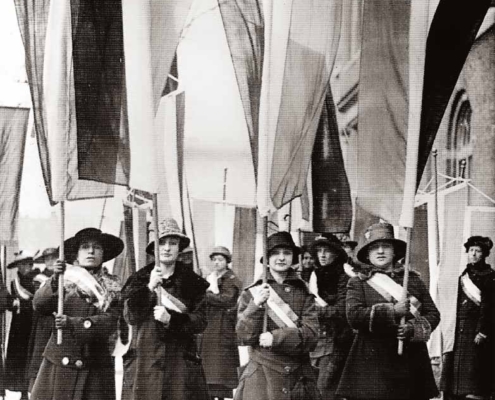 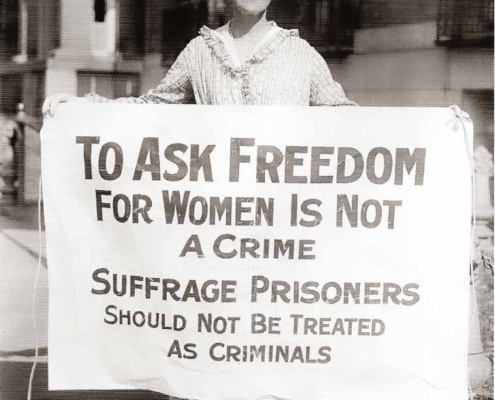 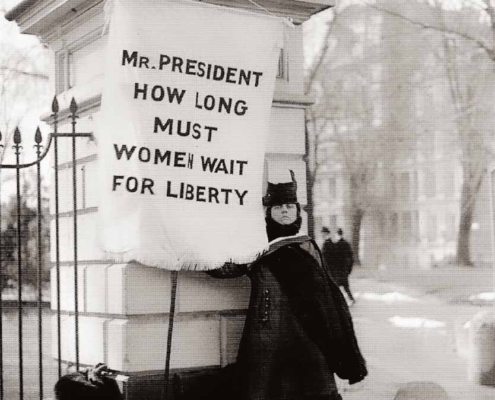 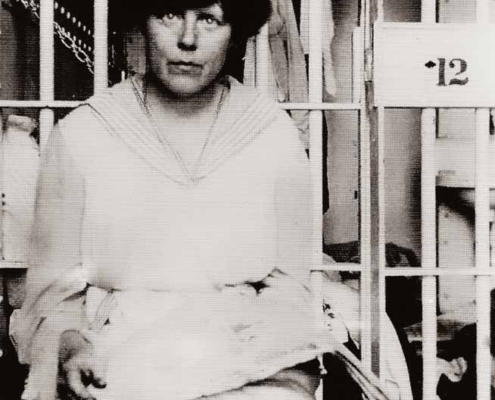 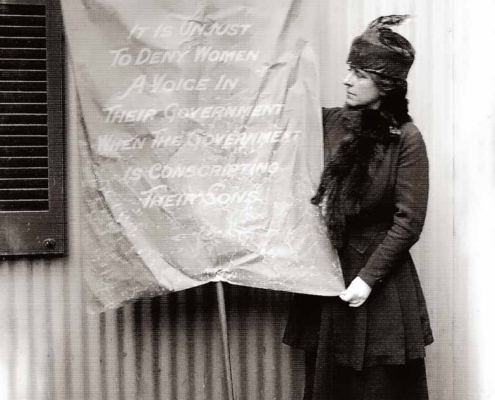 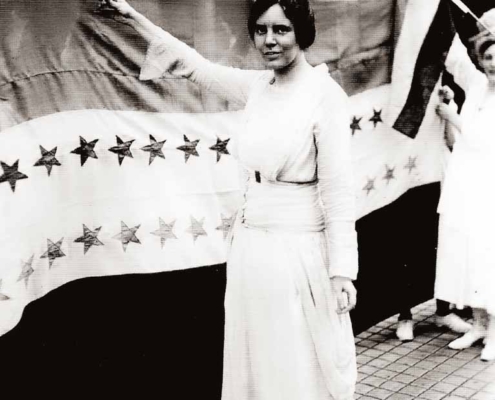 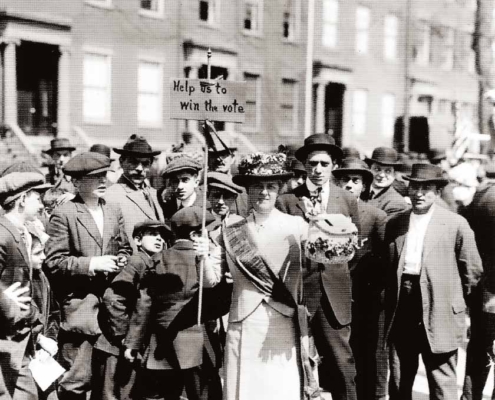 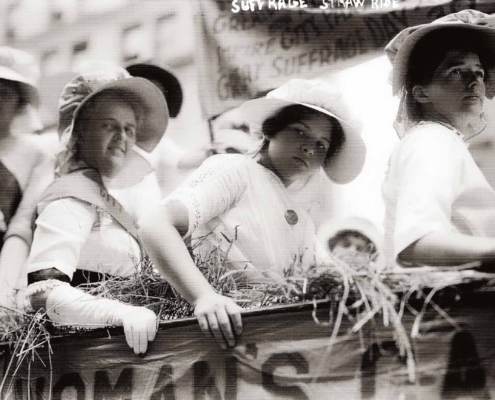 This article addresses national and local events prior to the 1920 ratification of the 19th Amendment granting women’s suffrage.

This Declaration of Sentiments begins by asserting the equality of all men and women and reiterates that both genders are endowed with unalienable rights to life, liberty, and the pursuit of happiness. It argued that women were repressed by the government and the patriarchal society of which it was part.

The 15th Amendment, ratified in 1870 during Reconstruction, stated that the right to vote could not be denied on the basis of race, color, or previous condition of servitude. Suffragists reasoned that women should thus be allowed to vote, but that right was still a half century away for white women while women of color had to wait almost a century to vote.

Around 1903, Englishwoman Emily Pankhurst helped bring the push for woman’s suffrage out of polite and subdued gatherings by generating splashy news articles and getting herself arrested. American suffragists followed Pankhurst’s lead.

By 1900, some western states guaranteed voting rights for women, first in Wyoming and then in Colorado, Idaho, and Utah. Washington state followed in 1910, California in 1911 and in 1912 Kansas, Oregon, and Arizona. As each state granted women suffrage, pressure grew in Congress for national action.

The elderly Anthony retired as National American Woman’s Suffrage Association president in 1900; Carrie Chapman Catt and Dr. Anna Howard Shaw stepped to the forefront as the nation entered the progressive era; social, political, and economic reform became the norm. Thousands of college-educated women had entered the workforce and became the driving force behind various social movements in public life.

The 16th Amendment, federal income taxes, the 17th Amendment, direct election of senators, and the 18th Amendment, prohibition, were all added to the U.S. Constitution between 1913 and 1919. The 19th Amendment, woman’s suffrage, would follow in 1920, but only after protracted struggle.

The liquor and textile industries, big city political machines, and cultural conservativism all blocked the way for various reasons, but women marched steadily towards suffrage.

Female suffragists were well-dressed in traditional women’s attire so as not to appear “too masculine” to assuage concerns that voting would make women less feminine.

Events in Little Falls were much influenced by both national and state trends. Little Falls became a “hotbed” of suffrage activity in Herkimer County. Zaida Zoller’s home on Garden Street was a gathering point for suffrage efforts; women’s suffrage giants Susan B. Anthony and Dr. Anna Howard Shaw both attended meetings in the Zoller home.

Shaw compared allowing men to decide the fate of women’s suffrage to submitting the subject of the equality of a goose to a fox.

In 1894, a debate on women’s suffrage was held at the Methodist Episcopal Church on Albany Street and Susan B. Anthony was in Little Falls from September 11-13, 1894. While here, she also addressed a group of suffragists at Temperance Hall in the Bidleman Block on Main Street. She stayed with Mrs. Jaynes on Ann Street while in Little Falls. During her Temperance Hall address, Anthony spoke of why she believed that the ballot should be placed in the hands of her sex.

Anthony added: “Women, we may as well be dogs braying at the moon as petitioners without the right to vote.”

In 1913, a women’s suffrage torch was carried from Mantuck, Long Island to Buffalo and as the torch passed through Herkimer County, Mrs. Frank Houghton carried it from Little Falls to Utica. July 28 saw the formation of the Women’s Political Union in Little Falls. That same year, women from Little Falls, Ilion, and Herkimer marched in the first local suffrage parade in Utica. In 1915, a huge suffrage parade was held in NYC with over 30,000 marchers, including an estimated 5000 men.

In November 1915, Herkimer County voted down a suffrage amendment to the state constitution. On June 12, 1916, the Herkimer County Suffrage Convention convened at the YWCA (then part of the YMCA) in Little Falls. A statewide petition campaign generated over one million signatures calling for women’s suffrage. 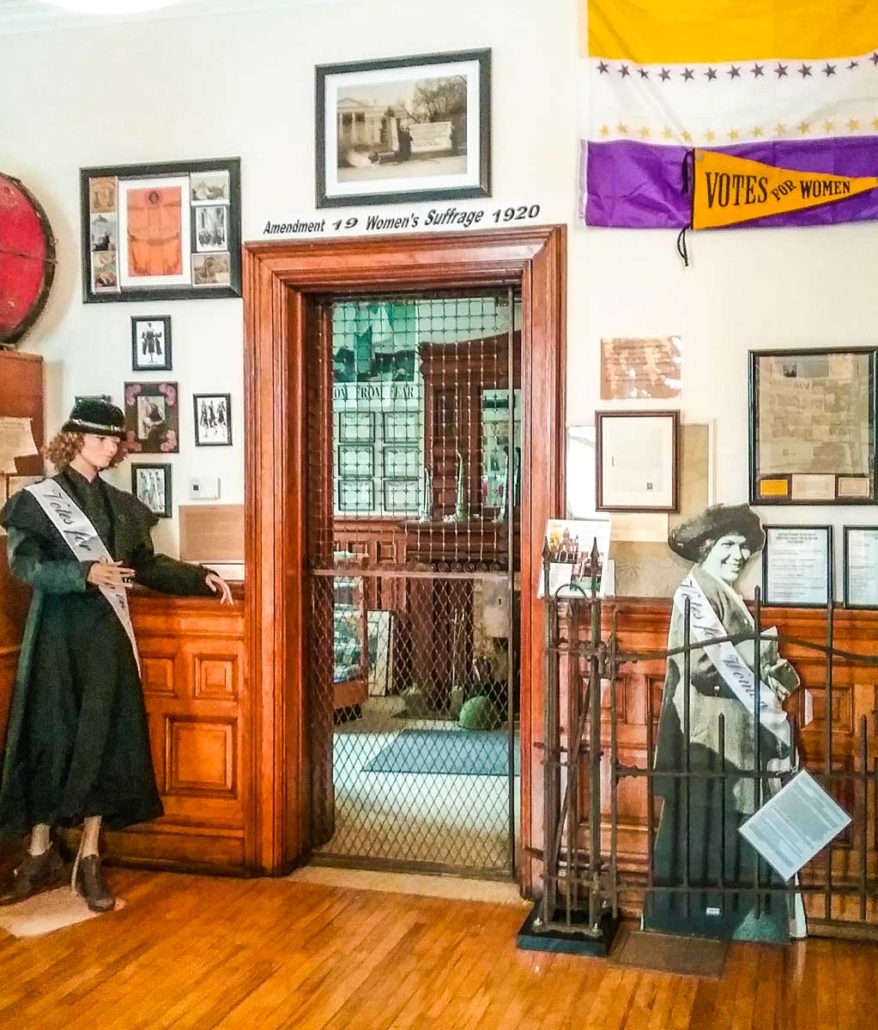 On the national level, much political pressure was brought to bear. In 1916, a California to Washington, D.C. march took place and President Woodrow Wilson was presented with a petition containing over 200,000 signatures. That same year, Alice Paul organized the National Women’s Party; a year later the group began the first peaceful protest outside of the White House; referred to as the “silent sentinels,” a number of purple, white and yellow-gold sashed suffragists were arrested. While in prison, Paul and other women engaged in hunger strikes and were force fed by prison authorities.

The bad publicity was a nightmare for President Wilson and he slowly began to change his position.

One of the posters being held stated: “President Wilson is deceiving the world when he appears as the prophet of democracy. President Wilson has oppressed those who demand democracy for this country. He is responsible for the disenfranchisement of millions of Americans. We in America know this. The world will find him out.”

Jeanette Rankin became the first woman to secure national office when she was elected to serve as a Congresswoman from Montana in 1916; while in Congress, she introduced the bill that would eventually become the 19th Amendment.

Locally, on February 28 and March 1, 1917, a suffrage school was conducted by NYC lawyer Elinoe Berns at the YWCA (YMCA).

A major plateau was attained when a woman’s suffrage amendment was added to the NYS constitution on November 6, 1917. Women had gained the right to vote in all New York elections. The Empire State had long been thought to be the key to national suffrage for women. 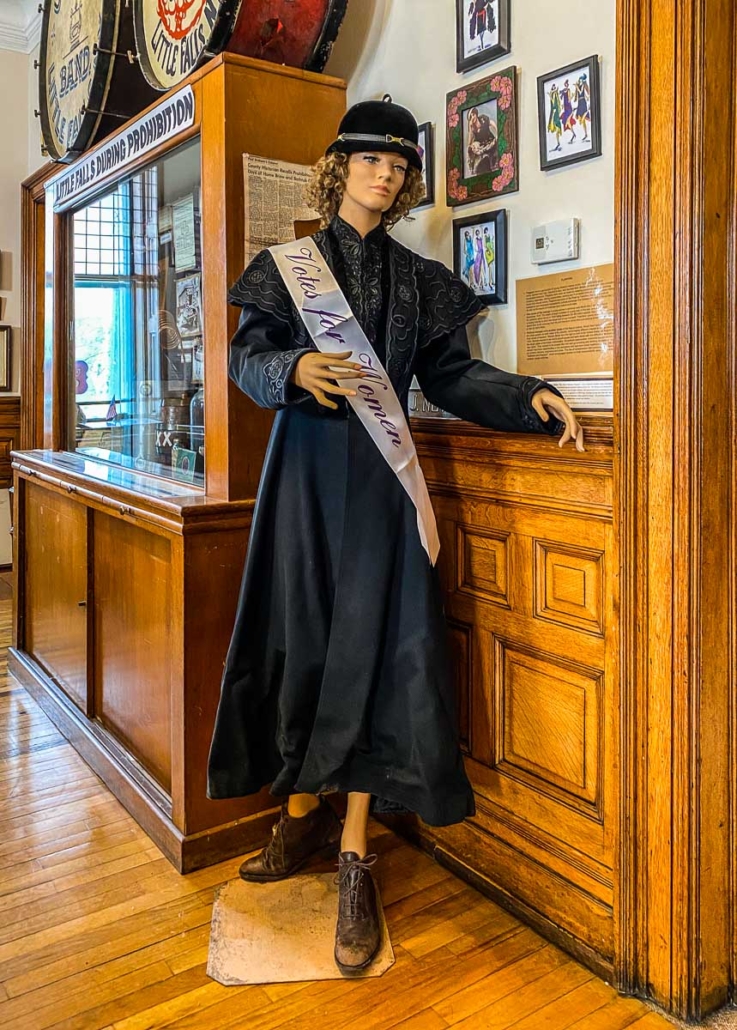 On August 26. 1920, Tennessee became the 36th state to approve the amendment via a majority vote; the Constitutionally mandated three-quarters of the states had approved the amendment and the woman’s suffrage amendment had thus been officially ratified and became part of our Constitution.

Success came about because of hundreds of state and local campaigns across the country; this was not a “top down” process. It was a piecemeal struggle with many setbacks. The nationwide state by state campaign of parades and public speaking tours put pressure on local politicians.

Once the 19th Amendment was safely in place, Carrie Chapman Catt went onto establish the League of Women Voters (LWV) to help guide women in political matters. Locally, Zoller was elected to lead the Herkimer County LWV in 1921 and again in 1922. Miss Lynda Billings, also from Little Falls, was elected group treasurer.

And so, the historical struggle that gained momentum in Seneca Falls, New York in 1848 resulted in the triumphant ratification of the 19th Amendment on August 26, 1920 and the single largest extension of voting rights in American history; 26 million American women had gained the right to vote.

A great story, but we must not forget that African American women (and men) were still barred from the voting booth by Jim Crow racial barriers such as literacy tests, poll taxes, grandfather clauses and other racial barriers. Native Americans and Asian immigrants were largely excluded from citizenship entirely.

Millions of women were given the right to vote by the 19th Amendment, but millions more were still denied suffrage. Shamefully, most white suffragists then abandoned the cause, leaving their fellow suffragists of color to continue campaigning for voting rights.

The history books largely leave out how women of color were “sold out” after the ratification of the 19th Amendment. The names of Black suffragists Frances Ellen Watkins Harper, Mary Church Terrell, Ida B. Wells and of course Sojourner Truth should stand alongside Stanton, Anthony, Catt, and Shaw in the history of the women’s suffrage movement.

The 1965 Voting Rights Act finally delivered the right of suffrage to African American men and women. The woman’s suffrage movement needs to be seen not as a triumphant culmination, but one landmark in a struggle for equal rights for all citizens that is not over yet.

Even today, some individuals and groups seek to deny the right of suffrage to millions by limiting poll access under the unfounded guise of combatting “voter fraud.” The fraud instead lies with those who have restricted suffrage for different groups of Americans throughout our history.

As a side note, a women’s suffrage monument on the Mall in Central Park in New York City was dedicated in August. The fourteen-foot tall monument features likenesses of women’s suffrage giants Sojourner Truth, Elizabeth Cady Stanton, and Susan B. Anthony.