After years of contracted lobbying and debate, Little Falls finally obtained a New York State charter to build and operate the Bank of Herkimer County; the Old Bank began operation in 1833, the first bank in Herkimer County. The building was placed on the National Registry in 1970 and is today a museum maintained by the Little Falls Historical Society.

Little Falls citizens interested in the city’s history fought hard to prevent the historic structure from being demolished.

The building was placed on the National Register of Historic Places in 1970 – one of the first in the area to be so honored. Purchased by the Little Falls Historical Society in 1977, it was carefully restored to its present grandeur over a seven-year period and, since 1985, has served as the depository for the society’s collections.

The Little Falls Historical Society charter states, “This museum exists to discover, collect, display and conserve data, documents and artifacts that are a part of the history of Little Falls and to maintain an institution on educational usefulness.” 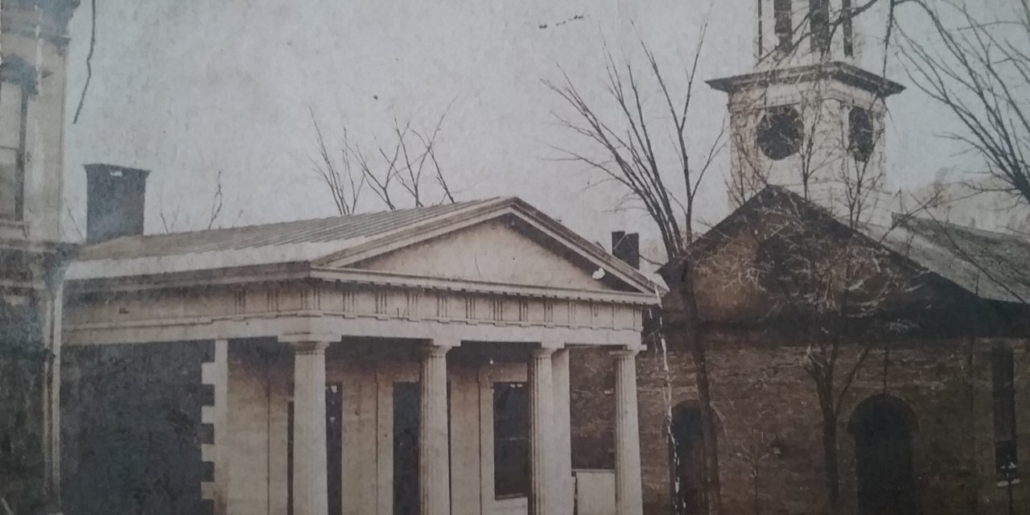 Constructed of native stone in 1833 as the first bank in Herkimer County and placed on the National Registry of Historic Places in 1970, the Little Falls Historical Society’s Old Bank Building Museum has had a storied past. 2020 marks the 50th anniversary of this designation and it is time to celebrate this great building as the survivor that it is!

The current generation of Old Bank Building Museum stewards stands on the shoulders of the small group of community visionaries who succeeded in their efforts to save the structure from the 1960’s urban renewal wrecking ball. Let’s begin by highlighting the chronology of important events related to this 1970 landmark designation.

Little Falls’ 1961 Sesquicentennial Celebration served as the catalyst for a small group of “history buffs” to secure a central location where important community artifacts would be permanently housed, displayed, and made available for research purposes. This group first met officially on November 29, 1962, and what would become our Historical Society was launched. Their headquarters was the GAR room upstairs in City Hall. In 1963 the Historical Society was granted a permanent charter by NYS.

By 1962, the Kennedy administration’s Urban Renewal program was in full swing; Little Falls received its first grant and demolition began on the south side of Main Street from Second Street eastward to William Street. A phase two grant was to be used to demolish the block of buildings between Ann and Second Streets, including the historic Old Bank Building. Historical Society president Dr. Fred Sabin first voiced the idea of saving the historic structure in 1965.

Of critical importance was the 1966 National Historic Preservation Act signed into law by President Lyndon Johnson. Lady Bird Johnson headed the commission which developed a national inventory of properties and buildings central to American character and identity. A mechanism had been created to protect such properties. What seems like commonsense today, historic preservation was at that time a radical idea “standing in the way of progress.”

The Little Falls Urban Renewal Agency purchased the building in 1966 and slated it for demolition as part of Phase 2.

Using this law as a guiding principle, the early members of the Historical Society stood four-square against the demolition of the Old Bank Building which upset many others, including the then-current administration. Old Bank Building demolition would allow for a larger parking lot for the new Herkimer County Trust building. The preserved need for fourteen extra parking spaces was pitted against the preservation of an important piece of community history.

This struggle played out for the next four years until the 1970 placement of the building on the NRHP; at that point, the structure was sacrosanct; some in the community were livid that a small group of “backward leaning preservationists” had stymied progress. Would anyone today trade the museum for those fourteen parking spaces?

WHY WAS THE BUILDING IMPORTANT?

To quote from a 1966 NYS Historic Trust newspaper article, “The old Herkimer County Bank Building, dating from 1833, is a work of the Greek Revival style, characteristic of the period. To discover a 130-year old bank is itself important, moreover, while much of the architecture of this period is constructed of wood, here we find a stone building with cut stone used in a monumental manner.”

Current Historical Society member Elaine Sperbeck remembers her father Harold being on the phone with the National Historic Preservation Commission in Washington making the case for Registry inclusion for the Old Bank Building. Using the Commission’s three criteria, Sperbeck reasoned that the building was associated with events significant to local history, that the building was associated with persons significant in local history, and that the building does embody distinctive characteristics of a type and period of architecture and construction. 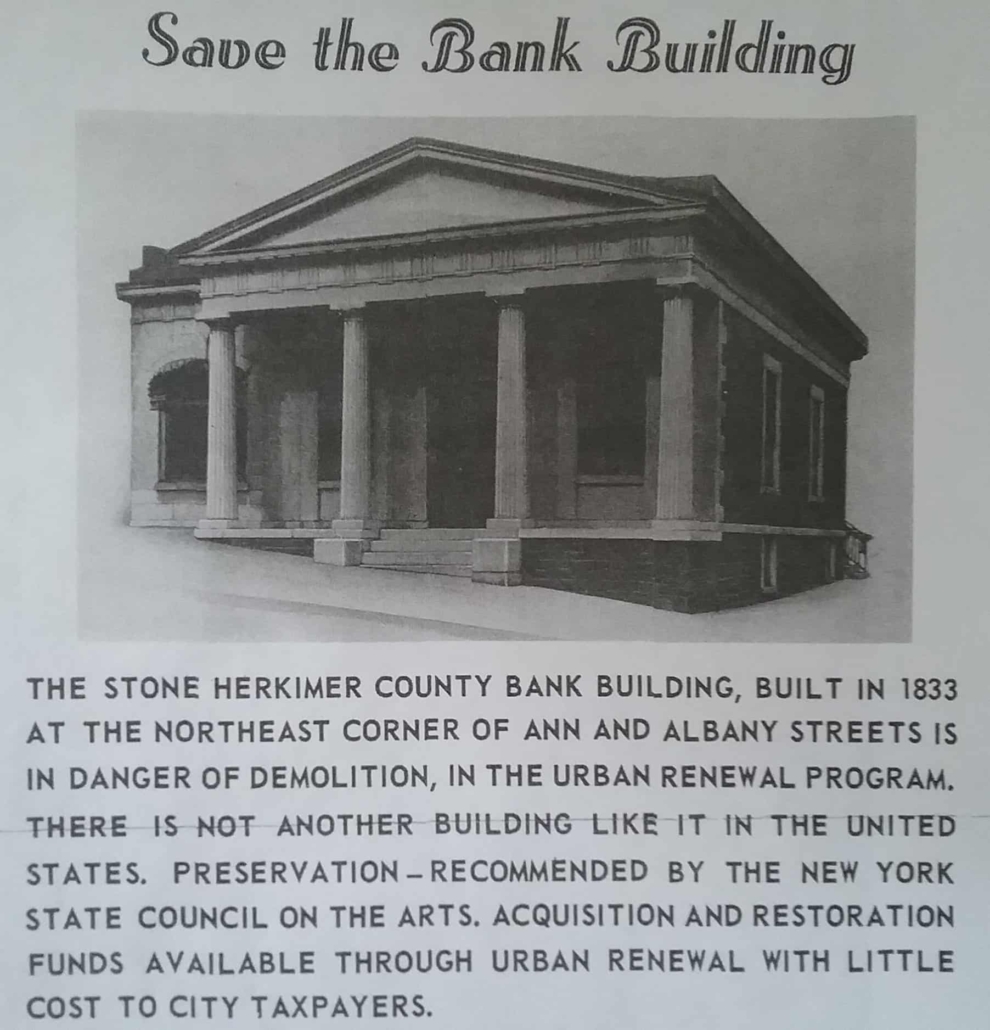 The Old Bank Building met each of these criteria and on March 5, 1970, the structure was officially placed on the National Registry of Historic Places.

The Old Bank Building then sat in a sort of limbo and neglect from 1970 until 1977 when the Historical Society purchased the structure. Seven years of extensive restoration followed, and by 1985, Historical Society artifacts had been safely moved to the new museum.

The building that had served as the first bank in Herkimer County, as the office of the local Red Cross, as a mortuary, as a temporary location for the Little Falls National Bank, as the Railway Express office, and as a storage area for Lovenheim’s dry goods store had become the primary repository of local history.

On this 50th anniversary, current members of the Little Falls Historical Society wish to thank the following individuals for their courage and vision in saving and then renovating the Old Bank Building:

Apologies if anyone involved in this effort was not included in this listing. Additionally, it is important to extend thanks to all those individuals, past and present, who followed in the footsteps of the above visionaries by their involvement and stewardship of the museum.

As Margaret Mead’s famous quote states: “Never doubt that a small group of thoughtful, committed citizens can change the world. Indeed, it is the only thing that ever has.”

Although the world certainly wasn’t changed, thanks to the efforts of the small group of committed citizens in saving the building from urban renewal, the Little Falls Historical Society remains an important community institution with plenty of parking nearby!

The building of the Bank in Little Falls met opposition from what nearby Village?

The Village of  Herkimer

The Herkimer County Bank was modeled after what pre-existing building?

US Bank Of Philadelphia

What was the cost to build the Herkimer County Bank in 1833?

Each limestone pillar was made out of how many pieces of stone?

What two historical Churches in Little Falls are made out of the same limestone?

Can you name a few other Businesses that used the building over the years after Herkimer County Bank moved to Main St?

In 1964, Urban Renewal owned the Herkimer County Bank building and wanted it demolished for what reason?

To make a parking lot for vehicles.

A group of Little Falls Citizens that enjoyed history fought to save the building in the late 1960’s and formed a Society that was known by what name?

The Little Falls Historical Society Museum open as a depository for our Village’s historic treasures in what year?

What is the oldest Crown Jewel document that the Museum holds on exhibit?

What National Trading Market gathered at the Museum’s corner to conduct business in 1870’s?

The Museum has a canceled Stock Certificate on exhibit from 1817 that was used for what original purpose?

To raise money to build the Canal.

Who drew the Museum’s oldest map on exhibit called the 1821 Turnpike Map?

Where was the Octagon Church’s Bible found that is on exhibit?

In the Church yard.