The “Frog”, which was cast in the local Reddy Foundry, was donated by Gertrude Sabin whose husband, Dr. Fred Sabin, was the first president of the Little Falls Historical Society. There were several of these which were located throughout the city and served to provide water to horses, cats, dogs, and people. People in the late 1800’s and early 1900’s took Sunday strolls and would meet at the “Frog.”

Who was the first President of the Little Falls Historical Society, that upon his death his Wife gifted the Frog Fountain to the Museum?

What was the Foundry’s name that made this Frog Fountain in 1889?

What was the purpose of this Frog Fountain and a few others dispersed around the Village?

For drinking for animals and villagers.

The Aqueduct Water Association supplied fresh water throughout the Village by what means? 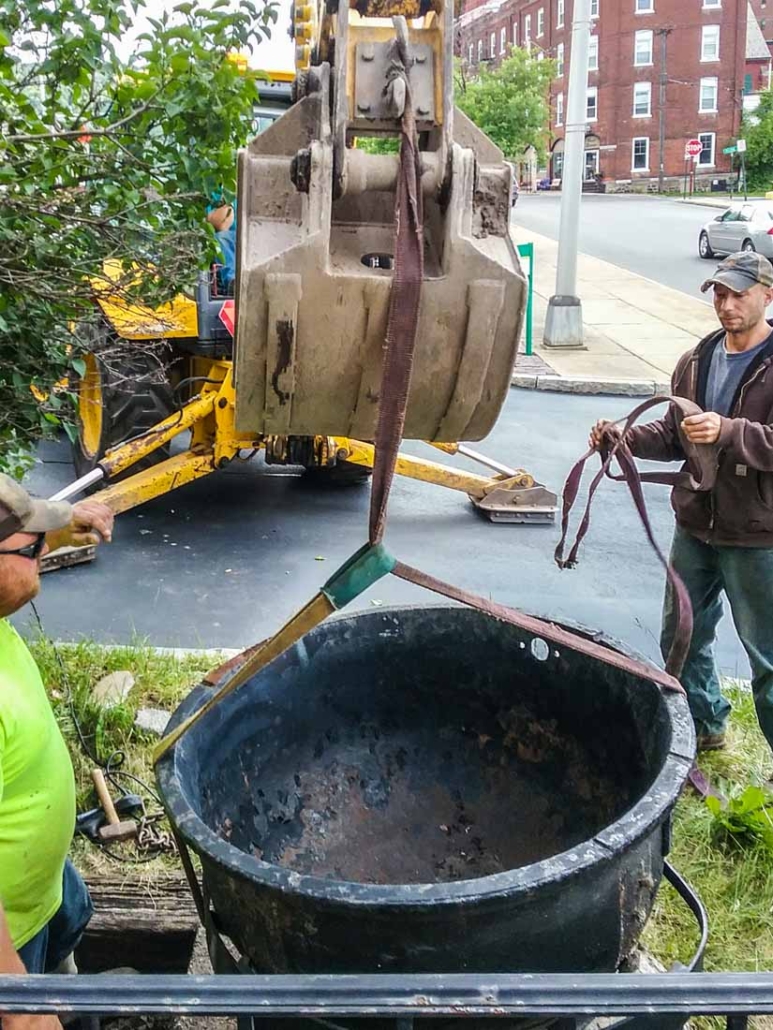 Antique Cast Iron, LLC removing the cast iron base
for restoration work in 2018. 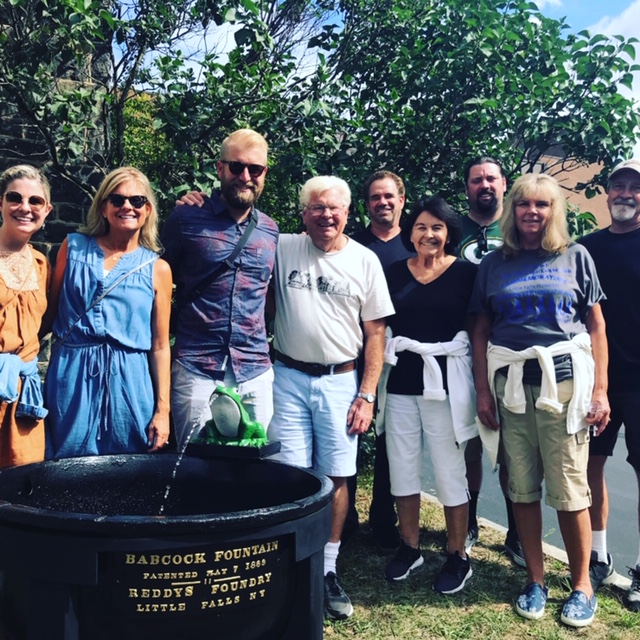 Bob and Mary Ann Mucica family of Camarillo, California, the main contributors for the restoration of the Frog Fountain. 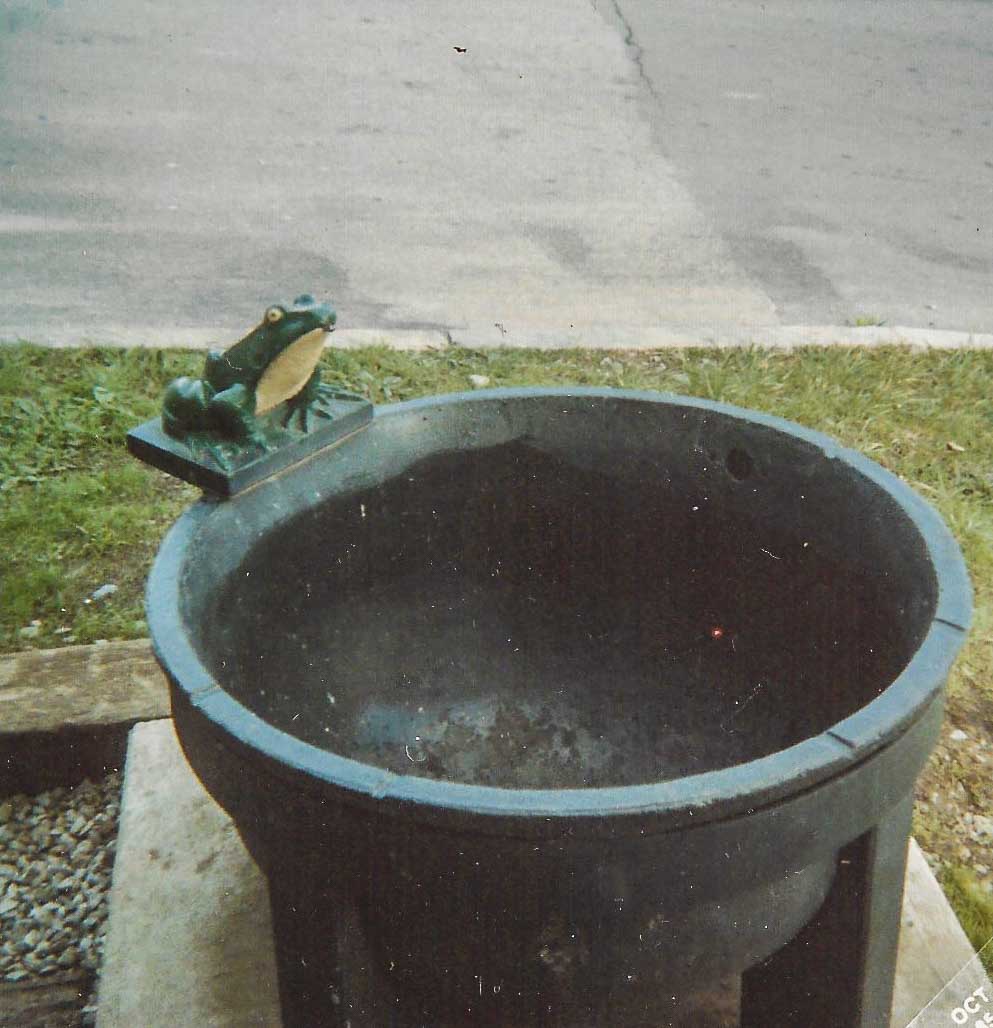 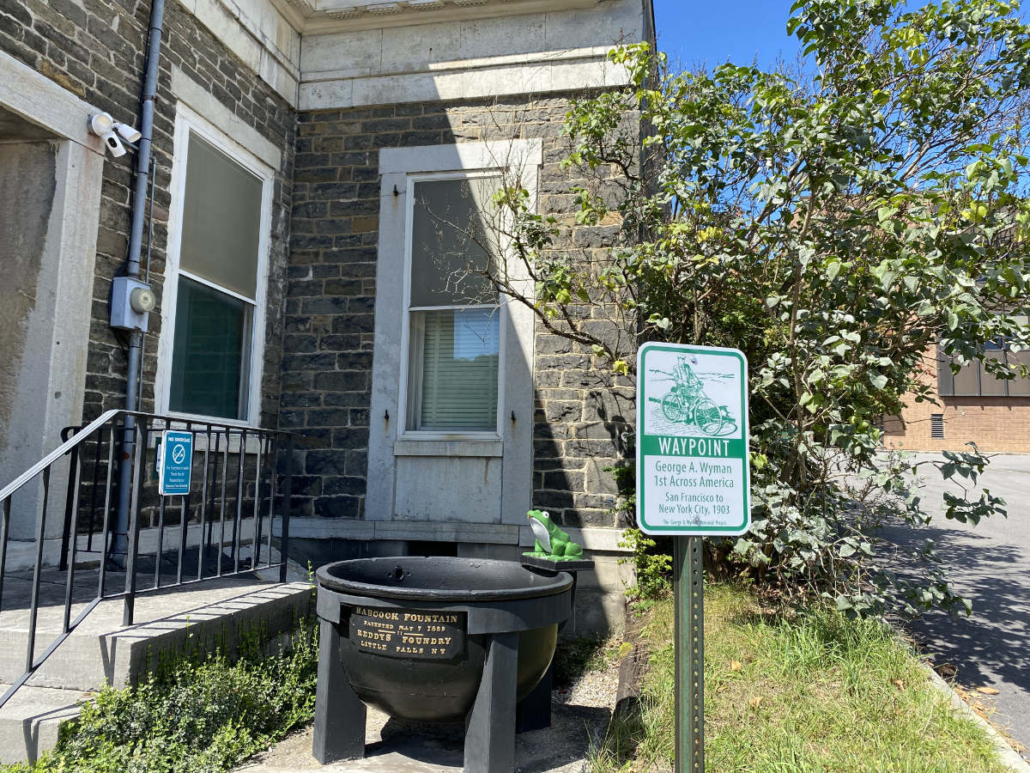 The sign shown next to the restored frog fountain is a “waypoint” marker for George Adams Wyman’s 1903 historic fifty-day, cross-country journey from San Francisco to New York City. Wyman was the first person to accomplish this feat on a motorized bicycle. The Historical Society was honored to be contacted by the George A. Wyman Memorial Project to help recognize Little Falls as a day forty-seven waypoint where Wyman was able to get a worn-out drive belt repaired before proceeding on to Albany. 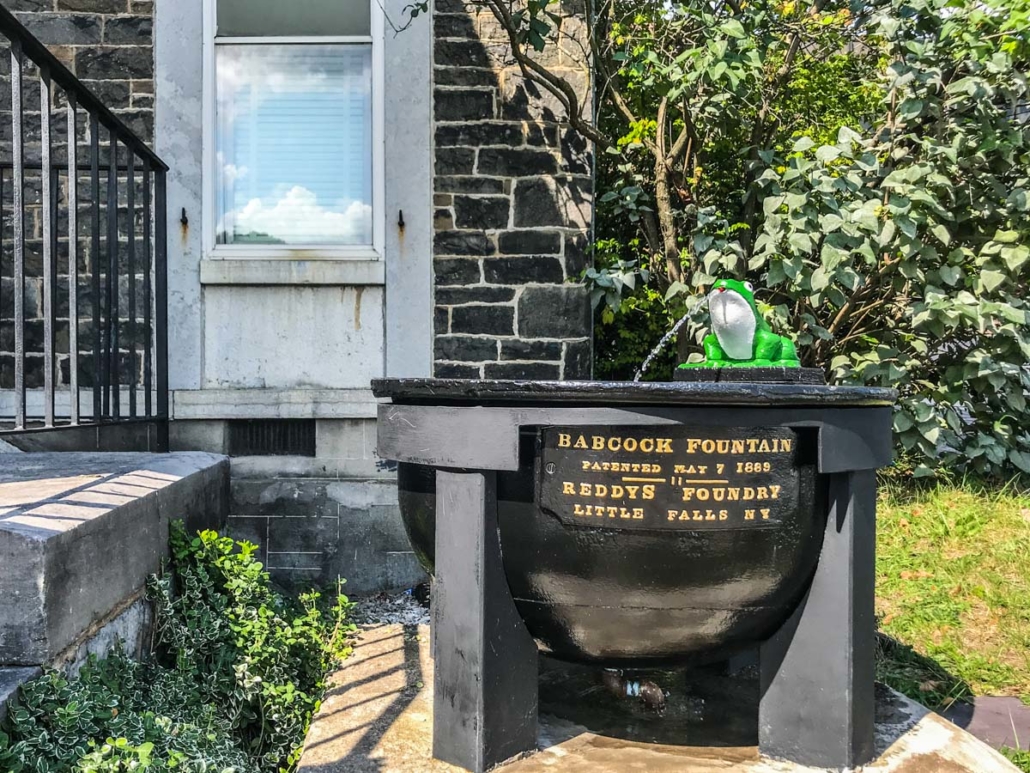 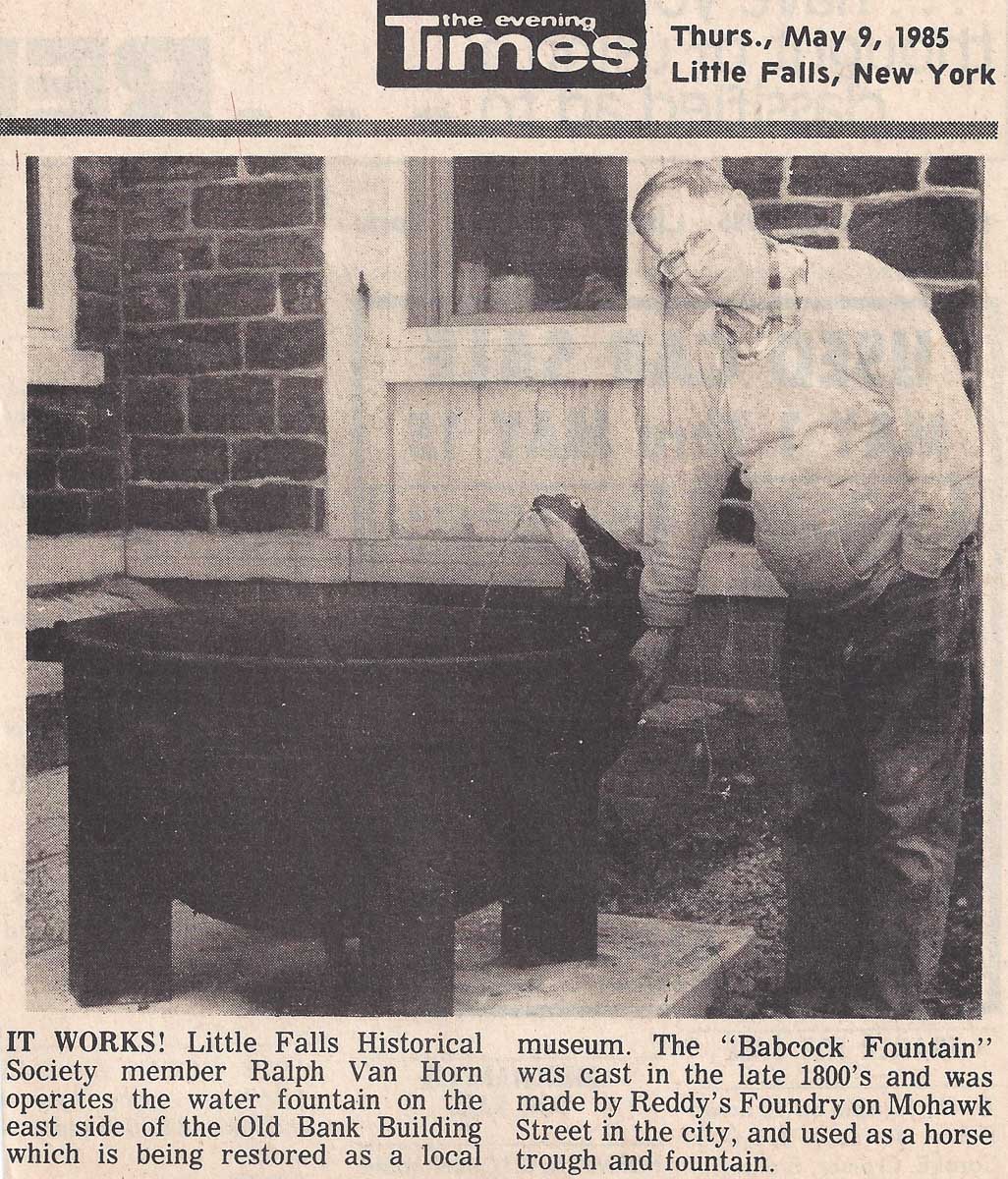 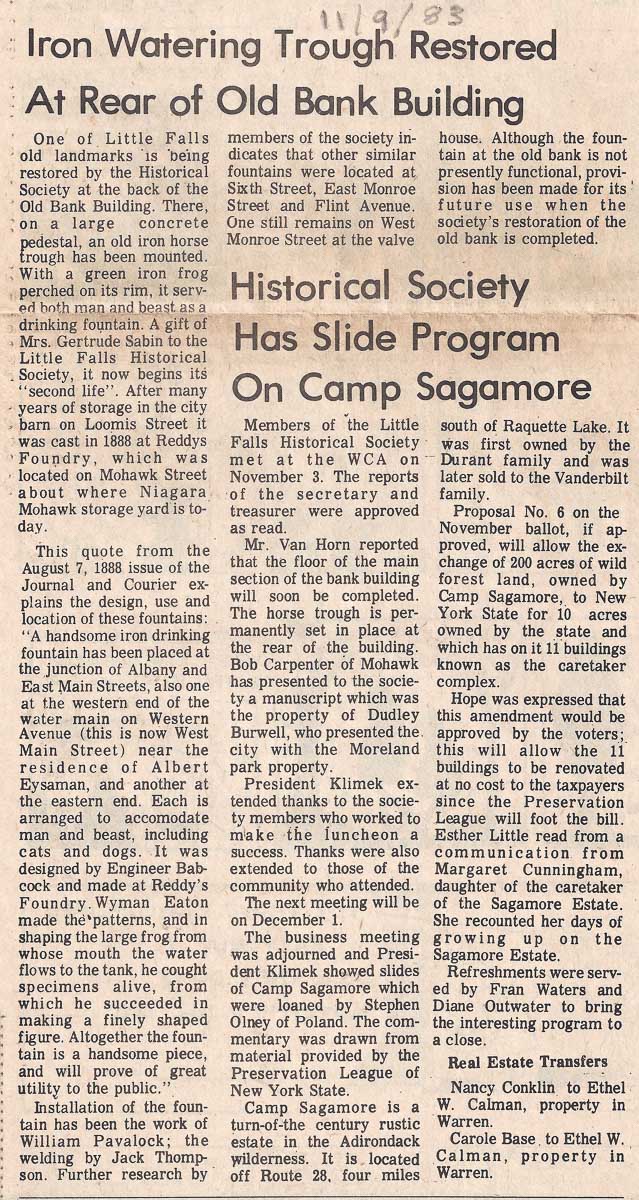 Restored frog fountain to be rededicated

By Jeffrey Gressler first published in the Times Telegram on August 9, 2018

The 130-year old frog fountain, from its black and gold basin to its green, white and red frog water spout, has been beautifully restored by the skilled artisans at Antique Cast Iron, LLC in Cherry Valley and returned to its longtime location behind the Little Falls Historical Society Museum. This important artifact will be unveiled and rededicated at 10 a.m. Sunday Aug. 12, but first some relevant background.

Our ancestors first lived close by the Mohawk River and likely took most of their water directly from the river itself. As the 1700s progressed, houses were constructed further from the river and drinking water was taken from open springs and creeks. Population growth and community enlargement brought on change in community water distribution. 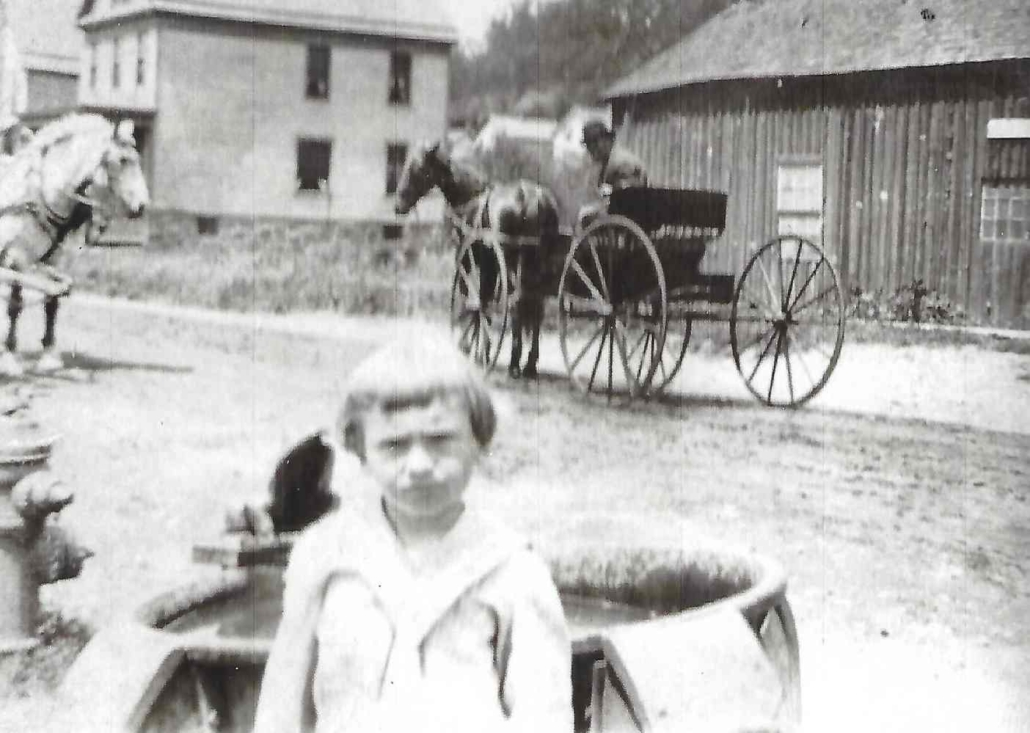 An undated picture taken someplace in Little Falls when the village had dirt streets. Does anyone know who this child was?

The Aqueduct Association was a private enterprise that constructed and operated Little Falls’ first water distribution system beginning in 1808, three years before our 1811 village charter.

Water was drawn and distributed to household subscribers via wooden pump logs. These same streams and creeks now lie beneath our streets and can create flood conditions during heavy rains and spring melt-off. Two sections of these wooden pump logs are on display in our museum vault.

Water distribution eventually came under municipal control. In the mid-1800s, water was taken from reservoirs in Burke Park and Ward Square and distributed to households throughout the village. Water for firefighting purposes was taken from reservoirs beneath the Mary and Main and Ann and Main Street intersections. At this time, water quality was a constant issue. These park reservoirs can be viewed in old time postcards.

Little Falls’ population grew to almost 7,000 people by 1880 and better quality drinking water was needed. A Board of Water Commissioners was created in 1885 and a $250,000 bond was passed for the construction of a water works system. The Little Falls municipal public waterworks began functioning in 1886; water originated from Beaver Creek located on Little Falls watershed property in Salisbury and was transported through eight miles of pipes, conduits and a mile-long open canal into Little Falls. Top Notch reservoir was put in use in October 1888.

The availability of quality municipal drinking water throughout the village led the water commissioners to showcase its quality. Little Falls watershed property was later expanded by additional purchases of land parcels and a dam and reservoir at King Springs were constructed. These now provide much of our municipal water.

On August 7, 1888, a handsome cast iron drinking fountain was installed near the intersection of Albany and East Main Streets on a lot owned by Charles Oyston who gave the village a three-year lease at $30 per year.

Around that same time, the Board of Water Commissioners authorized the manufacture of “four or five” additional drinking fountains to be purchased and installed which they hoped would have a great effect in beautifying the village. One was installed on Western Avenue (West Main Street) on land owned by Albert Eyesman; another was installed near the bottom of Furnace Street.

At least one of these cast iron drinking foundations was manufactured in Little Falls at the Reddy Foundry. Having arrived in Little Falls in 1839, Michael Reddy originally worked as a molder in Smith’s foundry on Furnace Street before establishing his own foundry in what had been the Loomis Mill on Loomis Island. Reddy operated the facility until his death in 1887. Many of Reddy’s products, such as ornate urns and cast iron fences, were sold in the southern states in the antebellum period. During the Civil War his business nearly went bankrupt when trade between north and south all but ceased. Many Reddy products are likely still in use in Little Falls today.

The inscription plate on the side of this frog fountain reads:

Reddy Foundry engineer Seth Babcock designed the basin and Wyman Eaton made the pattern for the frog portion of the fountain. Newspaper accounts state that Eaton captured and studied a number of live frogs while designing his frog pattern.

However, many drinking fountains were manufactured and installed in this pre-automobile age we cannot say for certain; their purpose was to provide both man and beast with quality drinking water as they traveled by foot and wagon through dusty village streets.

One can be reminded of the vision and wisdom of those individuals who oversaw the construction of our current water works system by reading the inscription plaques on opposite sides of the valve house building located at the intersection of Church and West Monroe streets.

On June 24, 1961 an auxiliary reservoir, located between the fifth and sixth holes of today’s Little Falls Municipal Golf Course, was dedicated to longtime public servant George Boyle by then Mayor John George during the sesquicentennial observance.

Dr. Fred Sabin’s wife Gertrude donated one of these cast iron fountains to the historical society in the late-1970s and Roger and Jason Stock used a tow truck to lift the fountain into place. It was then made operational by Ralph Van Horn and other society members. The forty inches wide and eighteen inches deep basin once had a functioning drinking fountain that spouted water from the mouth of a six-inch frog. The “spouting frog” is now once again operational. It is not known at this time if this is the same fountain that was installed on the Oyston lot back in 1888.

We also wish to thank Little Falls native Bob Muccia and other individuals whose generous financial support made this restoration possible. Without DPW manpower and public financial assistance, this restoration project could not have taken place. May future generations enjoy this important community artifact!

Jeffrey Gressler is a member of the Little Falls Historical Society

One of Little Falls old landmarks is being restored by the Historical Society at the back of the Old Bank Building. There, on a large concrete pedestal, an old iron horse trough has been mounted. With a green iron frog perched on its rim, it served both man and beast as a drinking fountain. A gift of Mrs. Gertrude Sabin to the Little Falls Historical Society, it now begins its “second life”. After many years of storage in the city barn on Loomis Street it was cast in 1888 at Reddys Foundry, which was located on Mohawk Street about where Niagara Mohawk storage yard is today.

This quote from the August 7, 1888 issue of the Journal and Courier explains the design, use and location of these fountains:

“A handsome iron drinking fountain has been placed at the junction of Albany and East Main Streets, also one at the western end of the water main on Western Avenue (this is now West Main Street) near the residence of Albert Eysaman, and another at the eastern end. Each is arranged to accommodate man and beast, including cats and dogs. It was designed by Engineer Babcock and made at Reddy’s Foundry. Wyman Eaton made the patterns, and in shaping the large frog from which he succeeded in making a finely shaped figure. Altogether the fountain is a handsome piece, and will prove of great utility to the public.”

Installation of the fountain has been the work of William Pavalock; the welding by Jack Thompson. Further research by members of the society indicates that other similar fountains were located at Sixth Street, East Monroe Street and Flint Avenue. One still remains on West Monroe Street at the valve house. Although the Fountain at the old bank is not presently functional, provision has been made for its future use when the society’s restoration of the old bank is complete.

Hours
Closed for the season.
Visits by appointment.