With all the buzz about COVID-19 vaccines, it brought back memories of vaccines administered when I was in Vietnam in 1971-72. 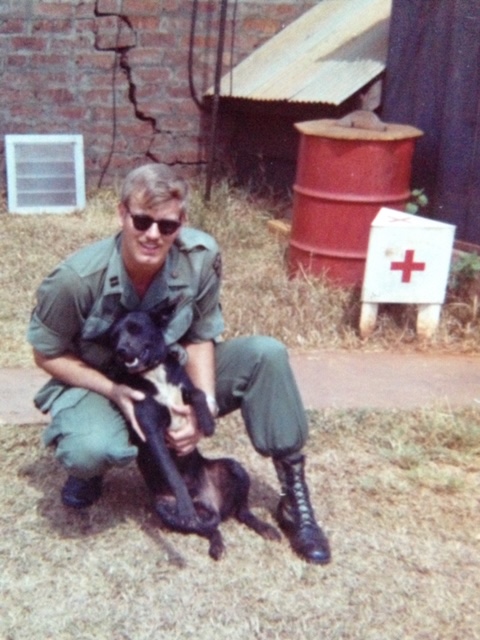 Schuyler Van Horn with dog Henry in Vietnam in 1972.

I was not a Medic but an intelligence officer stationed in a remote place named An Loc. Not far from the Cambodian border, 70 miles north of Saigon, straddling Route 13 (Thunder Road), I was one of 32 Americans in MACV advisor team 47, next to 2,000 ARVN (Army of the Republic of Viet Nam).

Our province, Binh Long, had a significant population of Montagnards. These were primitive indigenous people, the women were bare-breasted and the men wore loincloths and hunted with crossbows and poisoned arrows. The South Vietnamese called them “moi,” a pejorative term that translated as savage.

But the Montagnards were treated well by the Americans, and in fact, they guarded our small compound.

For some reason, we had four medical personnel on our compound — two Army Medics and two Air Force fellows. The Air Force guys spent most of their time at a leper colony just down the road.

Someone came up with the bright idea of Med Caps for Montagnards.

They lived in really remote villages and there were no roads there. They were only accessible by air — i.e. helicopter. They had no concept of germs. For example, the village’s water supply might have been a stream. A plank across the stream was their latrine. Fifty yards downstream they pulled out their drinking water. Their villages were small, with thatched huts on stilts, their livestock (if any) living underneath. They were slash and burn people, much like the early Iroquois Indians.

Needless to say, disease was rampant. They suffered from diseases such as polio, dysentery, whooping cough, measles, smallpox — all diseases that Americans had conquered and had vaccines to treat these scourges. So, the mission was to fly into the villages, vaccinate them, and we would improve their lot.

That concept was easier said than done. The first time we lined them all up, the medical personnel examined them, but they were scared of needles and no vaccinations were administered. The second time the Medics used small plastic vials of medicine, different colors treating different diseases. However, once the villagers went through the line, they all gathered around a banana tree and traded colors. The third time it was bottoms up and a big success. The fourth time ground fire was so intense we could not land. There were no more Med Caps thereafter.

And so ended my Vietnam vaccine experience.

SCHUYLER VAN HORN is a member of the Little Falls Historical Society.

Patriots Day Honors Those Who Were Not Sunshine Patriots by Jeffrey Gressle...
Scroll to top