“These are the times that try men’s souls.” So begins Thomas Paine’s December 23, 1776 epic treatise “The Sunshine Patriot,” written at perhaps the darkest point of the American Revolution, George Washington’s half-starving, dis-spirited troops were in their Valley Forge winter quarters.

The Battle of Oriskany was some eight months in the future, the crucial alliance with France further off still. The suffering, death, and destruction endured by our Mohawk Valley ancestors began when the British launched their 1777 three-prong campaign.

To further quote Paine: “The summer soldier and the sunshine patriot will, in this crisis, shrink from the service of their country, but he who stands by it now deserves the love and thanks of man and woman.”

Our Patriot ancestors were neither sunshine patriots nor summer soldiers. The purpose of our local Patriots Day observance is to honor their memory on the third Saturday in May each year.

Acting on a recommendation from the Little Falls Historical Society, then Mayor Robert Peters issued a 2010 City proclamation establishing a Patriots Day observance in Little Falls. Paired with Memorial Day, Patriots Day thus establishes a period of time each year honoring the memory of those who served.

Patriots Day was first established in Massachusetts in 1938 to be observed each year on the third Monday in April in commemoration of the 1775 Battles of Lexington and Concord, the first clashes between British and American forces in the Revolutionary War. This is a regional holiday in New England.

Anyone who has attended Patriots Day activities in Boston can attest to the emotions that are raised. The viewing of the somber bagpipe-led procession as it snakes its way through downtown Boston paying tribute at cemetery gravesites of Revolutionary War heroes with rifle salutes is a moving experience.

When the war began, there were around 10,000 people living in the Mohawk Valley; during the war, between 2500 and 3000 Loyalists left our region, mostly for Canada. Around 3000 Patriots abandoned their farms to seek safety elsewhere, and around 1000 others were killed. Only 3000 stuck it out. No sunshine patriots or summer soldiers in that number!

American school children should learn about Lexington, Concord, Bunker Hill, the ride of Paul Revere, and the signing of the Declaration of Independence, but they should also know about the all-important role that the Mohawk Valley played in the Revolution.

Our area was at greater risk from 1777-81 than any other region of the country. In fact, the Tory and Indian attack at the Little Falls gristmill occurred in 1782, some eight months AFTER the war had ended. More on that later.

The case for a local Patriots Day is compelling. Our region experienced a vicious civil war during the Revolution often pitting neighbor against neighbor and even relatives against one another. Hatred and vengeance ran deep. The stakes could not have been higher. The massacres at Cherry Valley and Andrustown provide stark testimony.

Loyalists or Tories remained loyal to England, fighting to keep their land and protect their families. Patriots also fought for land, family, and freedom and independence. The most basic of human instincts drove these divisions.

The primary British goal in conducting destructive military raids in the Mohawk Valley region was to wipe out one of the major food supply regions for American forces. Dozens of grain-filled buildings and gristmills were destroyed throughout this five-year period. Our area was  the breadbasket of the colonies.

Each year, the Little Falls Historical Society honors Patriots Day by hosting an event at a local historic site. These events have the twin purpose of honoring the service and patriotism of our ancestors and drawing attention to some of our oldest and most important local historic structures and burial grounds.

Each Patriots Day program includes a series of short addresses about key local events and people from our Revolutionary War period. The Astenrogen Chapter of the Daughters of the American Revolution places a cemetery wreath. Dr. Oscar Stivala plays “Taps” and Robert Schmelcher adds musical accompaniment.

The first ceremony in 2010 was held in Yellow Church Cemetery where approximately fifty Revolutionary War veterans are buried. Many of these veterans fought at the pivotal Battle of Oriskany under General Nicholas Herkimer. A little time spent in this cemetery induces a sense of awe and gratitude.

In the late 18th century, the small settlement at Riemensnyder’s Bush was clustered in the area near where Yellow Church Cemetery is today; a gristmill and fort stood nearby. On April 3, 1780, some sixty Tories and Indians raided this settlement, burned the gristmill, killed some number of Patriots, and took nineteen prisoners away. Survivors sought safety by moving southward into the valley. Revenge-filled hatred drove both sides. 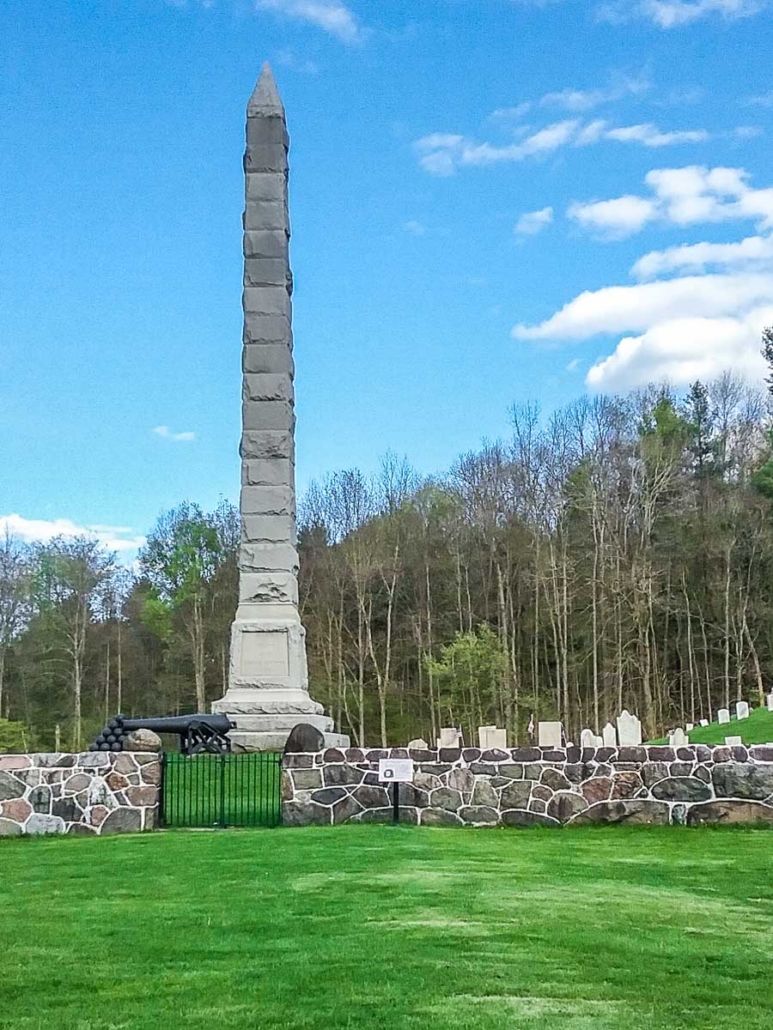 Fort Herkimer Church (1753-67), the oldest still-standing building in Herkimer County, and its cemetery were the sites of the 2012 Patriots Day event. The building stood as a fortress where locals often sought refuge during both the French and Indian and Revolutionary Wars.

School children learn about the April 18, 1775 midnight ride of Paul Revere warning residents of Lexington and Concord about the approach of British troops. The next day produced clashes between those troops and Massachusetts Minutemen.

It is but a minor stretch to compare Adam Helmer’s September 16, 1778 thirty-mile heroic run from South Edmeston to Fort Dayton with stops at Schuyler Lake and Andrustown warning all where he passed about the approach of Joseph Brant and 200 Tories and Indians with Paul Revere’s midnight ride. Many fled to safety at Fort Dayton; Helmer’s heroic run with Indians in hot pursuit saved an untold number of Patriots.

In 2013, Patriots Day was observed at Indian Castle Church (1769), the pre-Revolutionary War Anglican missionary church built by Sir William Johnson for Mohawk Indians.  The church is backdropped by old cemetery tombstones. The fact that this structure survived an arson’s attempt to burn it down in the 1970’s is a great story itself.

During this ceremony, Little Falls Historical Society members were the surprised recipients of a New York State Legislature proclamation presented by then Assemblyman Marc Butler and then Assemblywoman Claudia Tenney honoring the Society for its ongoing efforts promoting the contributions of our ancestors towards our nation’s independence.

In 2014, Patriots Day was observed at Snells Bush Church and cemetery in Manheim. The present church (1850) is the third structure to sit on this site. The first church (1757) was burned by Loyalists during the Revolutionary War.

The same fate awaited the members of the Palatine Committee of Safety after drafting and signing their Declaration of Independence-like document on May 21, 1775 at Louck’s Tavern in Stone Arabia fourteen months earlier. Franklin, his fellow Founding Fathers, and these like-minded Palatines were all traitors in the eyes of the British. 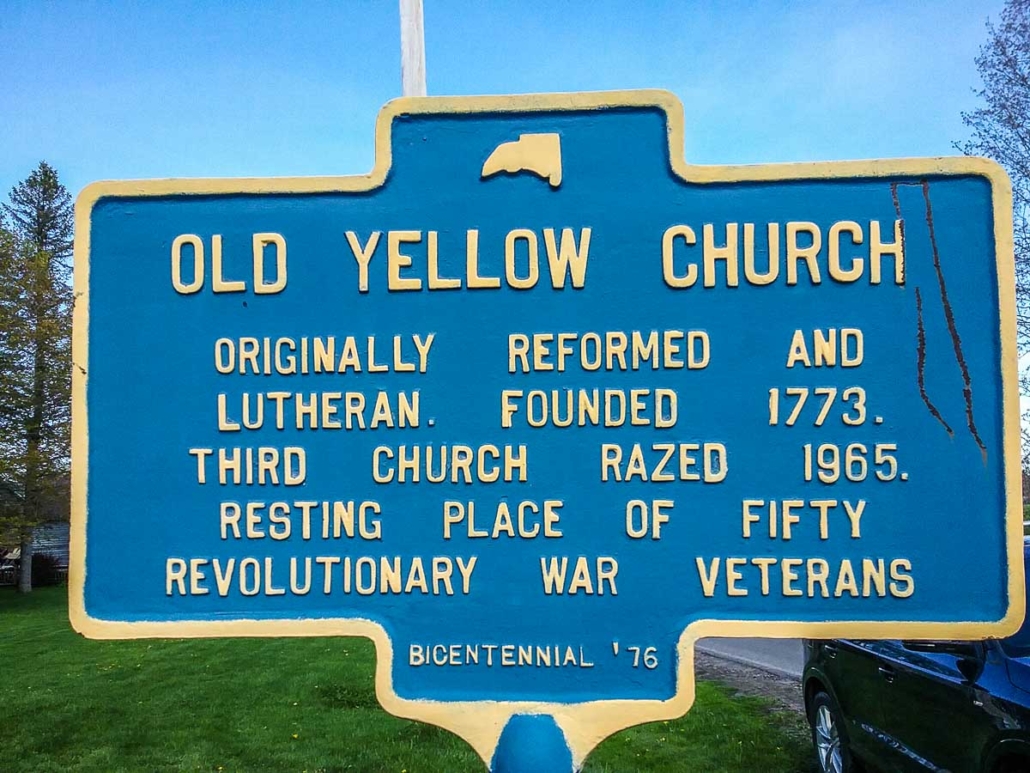 Patriots Day 2015 was observed in Little Falls at the former Masonic Temple (1915). This French Medieval-like building dominates a three-street intersection where both the Old Stone School House (1796) and Octagon Church monument are also located. This intersection is saturated with local historical significance.

Our 2016 Patriots Day observance was at the Herkimer Reformed Church (1835). The burial grounds alongside the church contain the remains of a number of Revolutionary War veterans.

The Battle of West Canada Creek took place in September 1781 on the eastern creek rim between present-day East Herkimer and Kast Bridge. Patriot forces under Lieutenant Solomon Woodworth set out from Fort Dayton which was located near the present Herkimer Reformed Church and stumbled into a trap set by a much greater number of Indians and Tories; the short battle left twenty-two dead Patriots and nine more were taken prisoner.

Historic Trinity (1807) in Fairfield was both the first Episcopal Church constructed north of the Mohawk Valley and the site of the 2017 Patriots Day observance. The nearby cemetery  contains the remains of early Fairfield residents, including some Revolutionary War veterans.

Retreating Tory forces under Major Ross and Walter Butler would have passed only a few miles to the north of Historic Trinity in October 1781 after conducting their final raids in the Mohawk Valley and battling Patriot forces at Johnstown. One day later, Butler met his fate at the hands of Patriot forces under Colonel Marinus Willett where Hinkley reservoir is presently located.

Paines Hollow United Methodist Church (1840) was the site of the 2018 Patriots Day observance.  Adam Helmer’s run with Indians in constant pursuit passed nearby this site and the 1778 Andrustown Massacre occurred only a few miles to the south.

For the tenth Patriots Day observance in 2019, the Historical Society returned the event to Little Falls at Emmanuel Episcopal Church (1835). The church was the first single denominational church in Little Falls and it is the oldest still standing church in the city.

To further underscore the Revolutionary War long period of Patriot v. Loyalist conflict and death, the 1782 attack at the Little Falls gristmill in June 1782 occurred some eight months after the British surrendered to American forces at Yorktown on October 19, 1781.

The gristmill was attacked and destroyed by some 300 Loyalists and Indians; some number of Patriots were killed. Gristmill owners Gresham Skinner and Frank Cox survived by hiding under the water wheel, Daniel Petrie died a gruesome death at the hands of the attackers. Local hatred still ran deep even after Revolutionary War hostilities had ended elsewhere.

The Little Falls Historical Society installed a NYS blue and yellow historic marker in 2020 near the site of this attack. The marker is located at the end of West Mill Street.

Having been a speaker at each of these Patriots Day observances over the years has been a privilege and honor. Historic structures and cemeteries bring on a combined feeling of historic solitude, awe, and thankfulness. As we stand before the graves of Revolutionary War era Mohawk Valley inhabitants, we are touched by the legacies of our forebears who so impacted the course of both local and national events during the Revolutionary War era.

The Little Falls Historical Society encourages the various groups of dedicated volunteers who caretake these important historic structures and sites to observe Patriots Day each year in whatever manner and fashion that is appropriate to their facility.

NOTE: Unfortunately, due to COVID, no Patriots Day events took place in either 2020 or 2021. Plans are in the works to host a 2022 event at the Norway Historical Museum.

This article was written by Jeffrey Gressler and published on May 10, 2021 for the 2021 Little Falls Historical Society Museum Writing Series.

“For it will not be believed that such a force as Great Britain has employed for eight years in this country would be baffled in their plan of subjugating it by numbers infinitely less, composed of men often times half-starved and always in rags, without pay and experiencing at times every species of distress which human nature is capable of undergoing.”     ~  George Washington ~

A Sun Shower Without End by Ray Lenarcic
Scroll to top