A Sun Shower Without End by Ray Lenarcic

While driving down Flint Avenue in my hometown of Little Falls the other day, I happened to look to my right and for no apparent reason, my mind flashed back to the 1950’s. 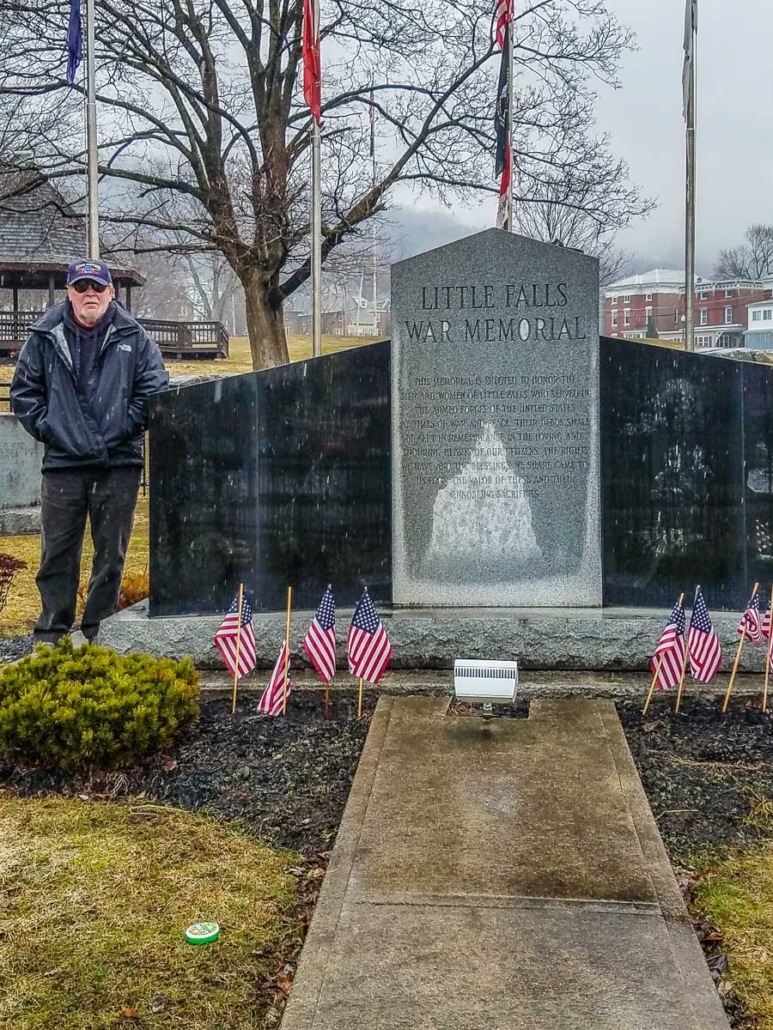 Ray Lenarcic at the Veterans Memorial in Ward Square.

I recalled in vivid detail searching for diamonds on a rocky hillside behind the Ave with my buddy Rog Kopp. The city is known for the diamond-like quartz located within its boundaries. Later that day, we changed into our uniforms pursuant to performing in the marching band’s halftime performance during another losing football game. These memories, and others to come as I drove on, reminded me of my incredibly blessed childhood-truly halcyon days. Blue skies and golden sunshine but for one black cloud which continues to hover over the city, and always will.

I was born on September 11, 1942, a date that lives in infamy (not the year, the day-month). Actually, another date living in infamy occurred about the same time I was conceived, December 7, 1941. Pearl Harbor. The days when I was learning how to walk and, to everyone’s later chagrin, talk, were not so golden or blessed for the “Boys of ’43.”

I’m sure that one of the times my Aunt Mary was pushing my stroller down West Main Street, Phil Spine Jr. passed us by on his way home. That Halloween, while hundreds of kids were trick-or-treating or dunking for apples at Roa’s backyard party, the handsome, debonair, gregarious kid whose ‘43 yearbook quote read “write me as one who loves his fellowmen” was killed in Italy. His father was my dad’s boss.

Upstairs from Phil lived Marion Bailey, my wonderful, kind fifth grade teacher at Church Street Elementary School. Her only child, Vernon, a star on the gridiron, was a low-keyed kid whose yearbook quote stated “A manly chap if ever there was one.” Mrs. Bailey’s Christmas Eves could never have been the same after her beloved boy was killed in Belgium on December 24, 1944. Sadly and ironically, he wouldn’t be the only victim of warfare from the city to die on that date.

One of my fondest youthful memories is playing first trumpet with high school band director Don Musella and the incredible Leo Potrikus in the Little Falls Military Band’s Wednesday night concerts in our two beautiful parks.

Included in those reminiscences is the legendary master of ceremonies, Mr. Bow Tie, Clarence Hotaling, along with clarinetist Joe Vespasiano, arguably Mohawk Central’s most popular teacher. Joe V, who served in and survived the war, was good friends with Nellis Jones. When my mother grocery shopped at the American Store she inevitably passed by Jonesy and Joey V stacking shelves. A gifted thespian, musician and class officer, Nellis’ “last will and testament” in the yearbook read-“I leave with my Klock.” That’d be his fetching fellow grad, Helen Klock. During the summer of ’43, when I was splashing around in my “baby pool,” they were married. Shortly thereafter he embarked for England. Christmas would never be the same for the Jones and Klock families and the brown-eyed beauty; Jonesy’s ship was blown up on December 20 on the English Channel.

Eddie Wroblewski grew up in the “Gut,” Furnace Street. He and his buds played games in the same park that me and my buds would a few years later. Edzu was an extremely intelligent, personable kid. According to his niece, Fran Teall, he could recite poetry in Polish at the age of three. The yearbook tells us that he belonged to the band, orchestra and Glee Club. His quote-“Had I been present at creation, I would have given some useful hints for better ordering the universe .” On January 12, 1945, somewhere in France, Eddie W’s bright light was extinguished.

Walter “Tapir” Sheehan’s picture never appeared in the yearbook alongside his former classmates because he dropped out of school. According to his niece Patty Sheehan Vail, a former schoolmate of mine, after the Tape convinced his mom to sign for him, he enlisted in the Marines. He joined up to “help get the war over.” In making his valiant contribution to that end, he earned a Purple Heart for wounds suffered on Gilbert Island, wounds which didn’t slow him down. In June of ’44 on Saipan, Walt was hit again- this time suffering wounds which would still his noble heart. On September 24. His birthday. He was 21.

The early 1950’s were important years for me in many ways.

While I was enjoying a particularly memorable birthday—big surprise party-on 9/11/50- the city was mourning the loss of Tommy Ochar, KIA in Korea the day before. In the late spring and early summer of 1951 when I was experiencing the joy of playing my first organized baseball in the Grasshopper League with the Jantosciak brothers, Jim Waltamath and “Shammy” Krchniak, Clinton Avery and Bill Grogan were making the supreme sacrifice in that same war. For me, Christmas 1951 was especially memorable as we welcomed to the family our first puppy, a red-haired Cocker Spaniel we unoriginally named Ginger. Five days later, Walt Bobak was KIA. The first highlight of my baseball career occurred in the summer of ’55 when my VFW team won the coveted Little League championship, defeating our archrival Orioles in extra-innings. Six months earlier, Milan Mosny’s plane went down. The West Point grad’s brother, Danny, graduated with me. Two wars, ten sons of the Rock City gone and, but for family and friends, too soon forgotten.

Unfortunately, that “ole debil war” wasn’t done wreaking its havoc upon the hearts and minds of the city’s residents. It had two more kicks in the gut left. Marine SSgt. Joseph “Stash” Zawtocki, Jr. Stash was one of the Furnace Street Gang. The blond-haired, blue-eyed, rosy-cheeked kid was a tough, never-give-up fireball who endured the playful abuse of us elders, often coming back for more. While I was reaching my adulthood, learning the ins and outs of the teaching profession, my friend was dying by inches while fighting in a war which never should have been fought. Given his nature, I wasn’t surprised when told that he suffered 684 days of torture at the hands of his captors in South Vietnam before his noble heart finally stopped beating on Christmas Eve, 1969. If you’re ever in Washington, D.C., stop by that resting place of heroes, Arlington National, and pay him your respects. Cpl. Donald A. Coffin. The wife of my late best friend and HCCC colleague Gary Wayne Ruff, Karen, was first cousins with Donnie. She remembered him for his strawberry-blond hair, good looks and rambunctious nature. Little Falls Historical Society member Dave Krutz played football with the Murphy Road resident who, like Walt Sheehan before him, had his mother sign the papers enabling him to enlist in the Army. After basic, the personable fun-lover set off for Southeast Asia to “do his duty to God and country.” On January 18th, 1968 his duty, tragically, was done. He was 18.

One of old lady nature’s more unusual phenomena is the sun shower-a veritable contradiction-bright sunshine and pouring down rain-at the same time. As I was passing by a sacred piece of ground in Eastern Park which Hunger Coalition leader and former City Treasurer Dave Petkovsek calls The Shrine, an area where inside a protective fence stand four small stone monuments donated by Herkimer County Community College students and a larger one graced by the incredible artwork of another local, Mark Verri, each honoring veterans, including combat nurses, a sun shower suddenly began raining down. And in the context of that trip down memory lane I’d just taken, I thought-how appropriate. The sun and blue skies representing the joys of life, and the raindrops symbolic of its sadness.

Read the Mohawk Valley Express e-Edition
Patriots Day Honors Those Who Were Not Sunshine Patriots by Jeffrey Gressle...