The Military Road and the War of 1812 by Pat Stock 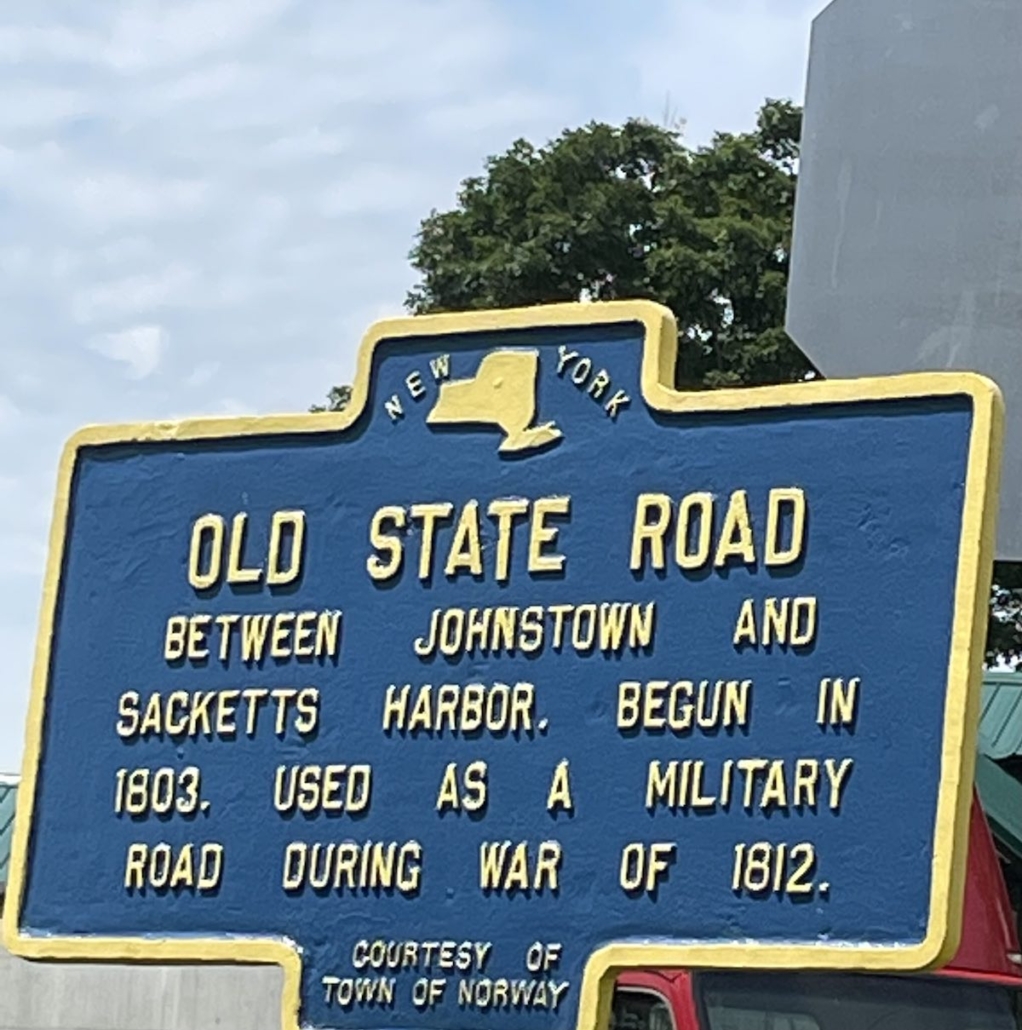 After the American Revolution, many New Englanders moved to New York State – specifically to the Royal Grant that had belonged to Sir William Johnson. Sir William had informed King George that the grant encompassed 40,000 acres, but in truth it was almost 93,000 acres stretching from Johnstown to the Black River country north of the Mohawk River.

New York had been the breadbasket of the Revolution for American forces, but as the Northwest Territory opened, the flat lands there were better suited to growing grain and New York turned to dairy farming. Farming had never been lucrative enough to produce the capital for road building, but as the farmers began producing dairy surpluses, principally cheese, they desperately needed a way to get their products to market in Albany.

To help farmers get their goods to Albany and to further open up northern New York, a meeting was held in Johnstown in 1803 to plan a road from there to the Black River country.

Norway was best represented at the meeting by Josiah Smith, Jared Dorman, James Norton and Henry Tillinghast. They hoped that the road would travel through their existing communities helping to promote trade and progress. There was a bit of controversy causing Josiah Smith to protest that the ground around Norway was so flat that “you could see a dog a mile (away).”

Steven Ayres was a local surveyor who engineered the road through Norway. The road was paid for by a lottery established by the state legislature to raise $41, 500 (about one million dollars in 2022). Other roads were also included in this budget. Completed in 1808, it ran from Brockett’s Bridge (Dolgeville) to Boon’s Bridge (Prospect) in Herkimer County. In Herkimer County it was 24 miles long in almost a direct line, with Norway at its mid-point. It required stamina to traverse the route of the then named State Road because it went in a straight line up and down hills not around them which would have necessitated the building of bridges over many small streams. It was dirt road with numerous ruts, rocks and mud pits, and was best traveled in the summer by wagon and by sleigh in the winter. The entire road ran through Brockett’s Bridge, across Manheim, Salisbury, Norway and Russia to Boon’s Bridge and then on through the Black River country.

Many inns were established along the roadway, among them was the Snyder House in Salisbury built in 1803. It had wagon repair and blacksmith shops which employed five smithies at one time. The inn’s bedroom measured 22 by 22 feet, housing travelers on the road – usually two to a bed.
Farmers’ wives very often found it profitable to feed the travelers and competition between them became a bit furious. An advertisement would read, “Sugar is sweet and so is honey. Here’s the place to spend your money.” It was also claimed that the farm houses were cleaner than the inns, and it was easier for the cattle drivers to stay at them.

Wagons pulled by six or eight horses carried wheat, whiskey, cheese and potash to Albany, picking up the Albany Turnpike at Tribes Hill. Teamsters mostly walked besides their teams with whip in hand, making four to six miles a day. There was also a time, only in months with an “R” in them, that oysters made their way from Boston to Cape Vincent, located where Lake Ontario empties into the St. Lawrence River. In a two-horse rig driven in relay fashion, with rigs changed every 30 to 34 miles, one or two gallon kegs of the shell fish could arrive at their destination reasonably fresh.

Why do we refer to the State Road as the Military Road?

England had been impressing our seamen into the British navy since before the Revolution. This continued into the 1800s because of a war between England and France. Both countries would board American naval and trading ships to take men and supplies as their own. President Thomas Jefferson, having decreased our navy almost into non-existence, tried to protect the United States in 1808 by instituting the Embargo Act, eliminating all foreign trade. The Embargo Act forced financially strapped farmers in Sackett’s Harbor on Lake Ontario, Plattsburgh on Lake Champlain, and other areas to ignore the law and smuggle potash and other goods by water to Canada. In this they were quite persistent. When a sheriff or judge impounded their barges, the farmers often would kidnap the sheriff’s family or burn down the judge’s house in an attempt to get their boat loads back.

The Embargo Act was soon discontinued. However, the British continued to blockade American trade with France, impress our sailors and began stirring up the Indians to attack American interests in the Northwest. For these reasons, the United States declared war on England and the State Road became a major transportation artery for troops and supplies. Sackett’s Harbor on Lake Ontario was the only deep-water port on our northern frontier and a military force was needed to defend it, leading the State Road to being rebranded as the Military Road (as the historic marker in Norway attests).

Across the Military Road from the east to Sackett’s Harbor went cannons and other army supplies. Among the many stories is that of a cannon embedded in the muck sixty feet below the bridge at Prospect. In 1813 “Izzard’s Army” of four thousand troops, complete with supply wagons and a troop of mounted dragoons, traversed the road waving the national flag with its 15 red and white stripes and 15 stars. Commanding these troops was 39 year old Major General Henry Izzard. Along the way “Izzard’s Army” encamped in Norway, as did most troops taking the same route to and from the harbor.

At one point, one of the most famous commanders in United States history, General Winfield Scott, traversed the Military Road on his way to training camps in Buffalo. It is reported that Scott stayed one night at the Salisbury Hotel while enroute.

At the start of the War of 1812, the United States had fewer than 12,000 soldiers, of which nearly half were new recruits.

To fill the need for manpower, the Federal government instituted a draft, and called out each state’s militia. New York was asked to provide 13,500 militia men. While regular army soldiers typically served for four years, militia men’s active- duty time was measured in months. In addition, state militia men realized that by law they didn’t have to fight outside the borders of their state which sometimes caused problems.

Militia men had only rudimentary military training, (by the War of 1812 militia had not been called on to fight for nearly 30 years). All men between the ages of 16 and 65 were expected to serve in the militia. The training they did receive usually amounted to a two week stint, with marching and drilling on the Military Road for one day after which there was “light duty” visiting local taverns. Along the 24 mile stretch of the Military Road in Herkimer County there were twelve taverns. The militia boys expected large freedoms and often took over taverns. They sometimes “fished out” whiskey bottles using their ramrods with nooses on the end, picking the bottles out over the palings erected by the tavern keeper to protect his stock.

But Herkimer County militia did fight and distinguished themselves at the Battle of Sackett’s Harbor in May of 1813. Under the command of General Jacob Brown, the Herkimer County men shouldered their nearly six foot long, nine-pound Springfield flintlock muskets and repulsed a British raid meant to destroy shipbuilding at the harbor. It is a well-founded fact that during the British naval bombardment brave militia men raced out of their blockhouses to collect cannon balls to replenish their own artillery.

Norway, with an 1800 population of about 900, of which over half the men were either too young or too old to serve in the militia, supplied two regiments, one militia and one of regular army riflemen, to the American cause during the War of 1812. At the end of the war, as was the practice, Norway men petitioned the government for compensation for destroyed clothing and equipment, (officers wore uniforms but the rank and file soldier wore his own homespun and supplied most of his other necessities). From Norway, Ebenezer Hurd asked for $24, Edmund C. Pulman $65, John Rathbun $30, John Sisson $30, Jeremiah Smith $38, Ralph Tredway $55, and the Tompkins boys, Cornelius, Samuel and Stephen M. requested, respectively, $70, $75 and $70.

With the advent of canals, railroads and paved roadways, the Military Road lost its usefulness and became all but forgotten. Today, land invasion routes are less a priority as airplanes and missiles have become the preferred tools of destruction and defense. Most of the Military Road is paved, but sections are still dirt and barely able to allow a wheelbarrow to pass though. Our modern militia is a highly trained and well-equipped state army that has no use for such a relic as is the Military Road.

A Motorist’s Camp with a History
Scroll to top
error: Alert: Content is protected!