The Lighter Side of Vietnam

My journey with the US Army started on June 17, 1968, the day after I graduated from Hobart and William Smith Colleges and started looking forward to law school.  The day before, leaving my graduation ceremony, my parents and I passed the old library with the Legend “Ye are the Hope of the World” carved on the portal. My world came crashing down the next day when my draft notice arrived in the mailbox. Law school would wait.

My experience was not unlike others. Mike Hanna, classmate and retired Hobart and William Smith Colleges athletic director, also got his draft notice that same day. In fact, I followed Mike to Officer Candidate School and Vietnam where we were both intelligence officers working in the Phoenix program.

I arrived in Vietnam in the summer of 1971. My duty station was An Loc, 70 miles north of Saigon, near the Cambodian border.  The Iron Triangle, the Parrot’s Beak, and Black Virgin Mountain were nearby. I was assigned to MACV Advisor Team 47, a small group of 32 American advisors. Our compound had a sign that said, “Welcome to Love Compound.” Next to it was a smaller sign that said “Abandon Hope All Ye Who Enter Here.” It was very comforting because it took me back to the days of Western Civ and Dante’s “Divine Comedy.” At least someone there had a sense of humor.

An Loc was a sizable community of 15,000. Next to our compound was the headquarters of the 5th ARVN division, about 3,000. We sat astride Highway 13, commonly known as Thunder Road because of frequent convoy ambushes.

My boss was a hard-bitten major who also was a Ranger. It was his second combat tour. But he had a wonderful singing voice. Many a time we barreled down Highway 13 singing “Over There” at the top of our lungs. We even once almost blew up his jeep engine by burying the speedometer.

My Vietnamese ARVN counterpart was a 35-year-old married captain who had been in their Army since he was 18. Before I left the States, I had had a two-month immersion course in Vietnamese. He spoke a smattering of English. I was his 5th American advisor.  It was a normal custom in Vietnam for males to walk down a street hand in hand.  He liked to walk with me that way. He once took me out “to dinner.” The main course was a cooked fish- eyes, scales, and entrails all- served on rice paper. He insisted I eat the entrails since it was good luck. For dessert we shared a Cambodian duck egg. It was rather large, and he knocked a hole in the top with a parfait spoon. Inside was the duck embryo to include eyes and bill. I ate it. That night I loaded up on diarrhea tablets.

Once a month we made a trip to Tan Son Nhut, a large base in Saigon to refresh our beer supply. We would take two “gun” jeeps and a 2-and-a-half-ton truck for the booze. The gun jeeps were each mounted with an M60 machine gun that swiveled. Although it was only a 70-mile trip it took all day because the roads had to be cleared of mines and there were numerous road check points. By the time we got to Tan Son Nhut our uniforms were almost red with sweat and laterite clay dirt from the roads. At our compound we wore name tags but rarely rank. The bad guys would shoot at officers. I wore a booney hat with shotgun rounds stuck in it and carried a 12-gauge Remington shotgun.  Usually, our first stop upon arrival was a mess hall.  On one of my monthly trips, I happened to look across the table and to my surprise the guy was Lt. Doug Tripp, with whom I had pledged at Delta Chi.  Small world. It was on one of these trips that I emerged from the mess hall and some Army major accosted me about my slovenly appearance. My lack of rank and body odor really offended him. My sin- not saluting him. Chicken stuff even in Vietnam.

On another one of these trips, I was driving in my jeep across the base to return to Love Compound. Damned if a Military Police jeep didn’t stop me and gave me a ticket for speeding. I was very angry and tore the ticket up in front of the rather spiffy looking MP. My comment to him was: “Well, what are you going to do to me- send me to Vietnam?” About the same time my NCO idly pointed the M60 at the MP. The guy’s face matched his fatigues.

Christmas of 1971 in An Loc was interesting.

On Christmas Eve Day I had attended a Christmas parade of military vehicles consisting of creches of the baby Jesus framed by flame breathing dragons. Since An Loc was in the middle of the Michelin rubber plantation owned by the French, there was a heavy Catholic presence. Most of the people in An Loc were Catholic while most of Vietnam was Buddhist. The parade was a curious melding of cultures and religion. On Christmas Day there was a truce in place. Luckily everyone honored it. Those of us in Love Compound not on leave got wondrously drunk. I can honestly say it was one of the best drunks I can remember. It was dumb but we were so glad to be alive. 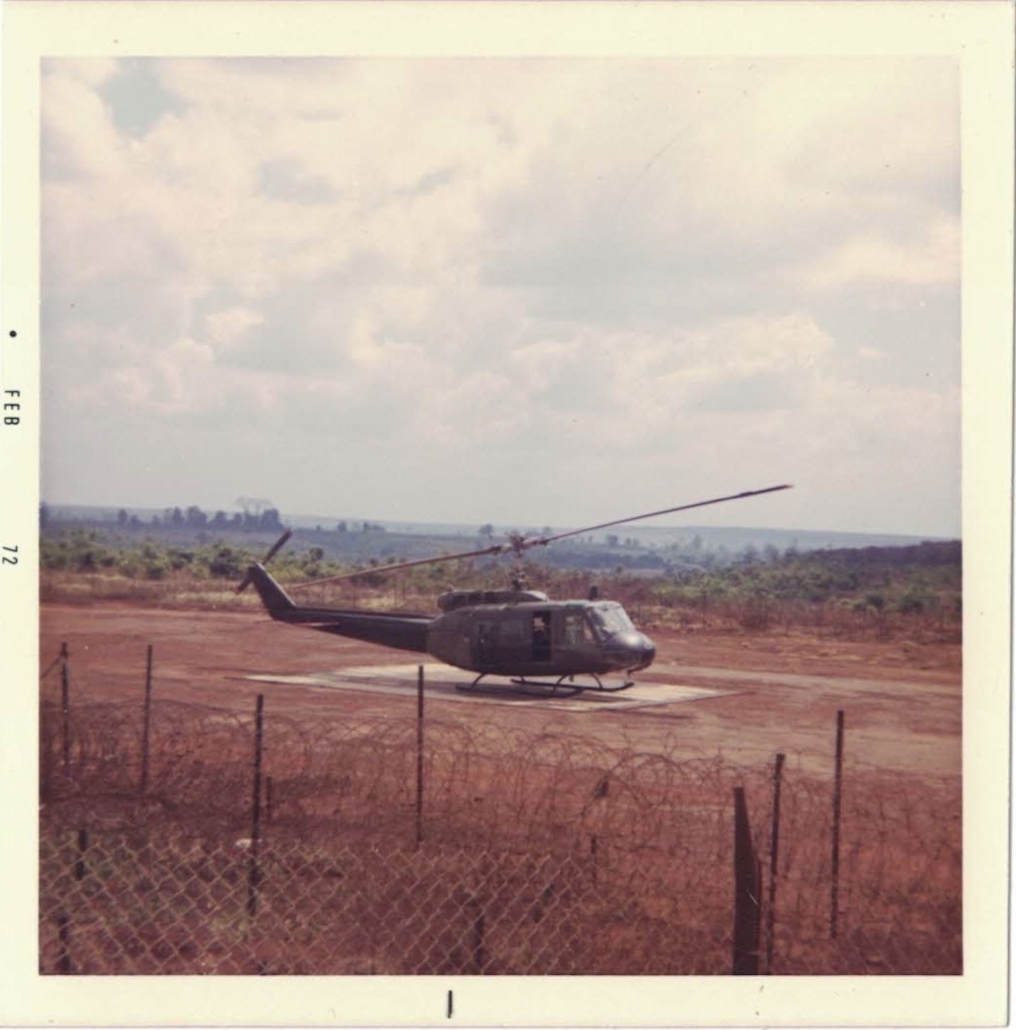 Helicopter on the “pad” at Love Compound, An Loc, Vietnam taken in February 1972. This is a helicopter we called a “slick,” and my dog Henry and I spent hours flying VR’s (Visual Reconnaissance) in these. (The Battle of AnLoc started on April 4, 1972, not long after the picture was taken.)

During my tour I acquired a dog named “Henry.” Henry was my constant companion. He loved to go on VR’s (visual reconnaissance) in the helicopters. Several times he almost fell out. He actually did fall out of the jeep a few times. Henry was quite the Lothario and I actually took him to the only Army vet in country at Tan Son Nhut to get him fixed. It did not improve his disposition.

I was one lucky guy. Three weeks after I left, An Loc was besieged by 30,000 NVA and VC. The siege lasted nearly 60 days and was finally broken by massive B52 air strikes and ARVN pluck. Because supplies could not get in, Henry ended up in someone’s stew pot. I could not afford to bring him home. I still miss the rascal.

Schuyler Van Horn is a member of the Little Falls Historical Society.