Since 1911, Moreland Park has played an important role in community life for generations of Little Falls residents. Family picnics, group outings, community events and celebrations, wedding receptions, birthday and graduation parties, family and class reunions, and kids squealing with delight on the playground equipment are all common occurrences on the park’s bucolic grounds. We all have our own Moreland Park memories. 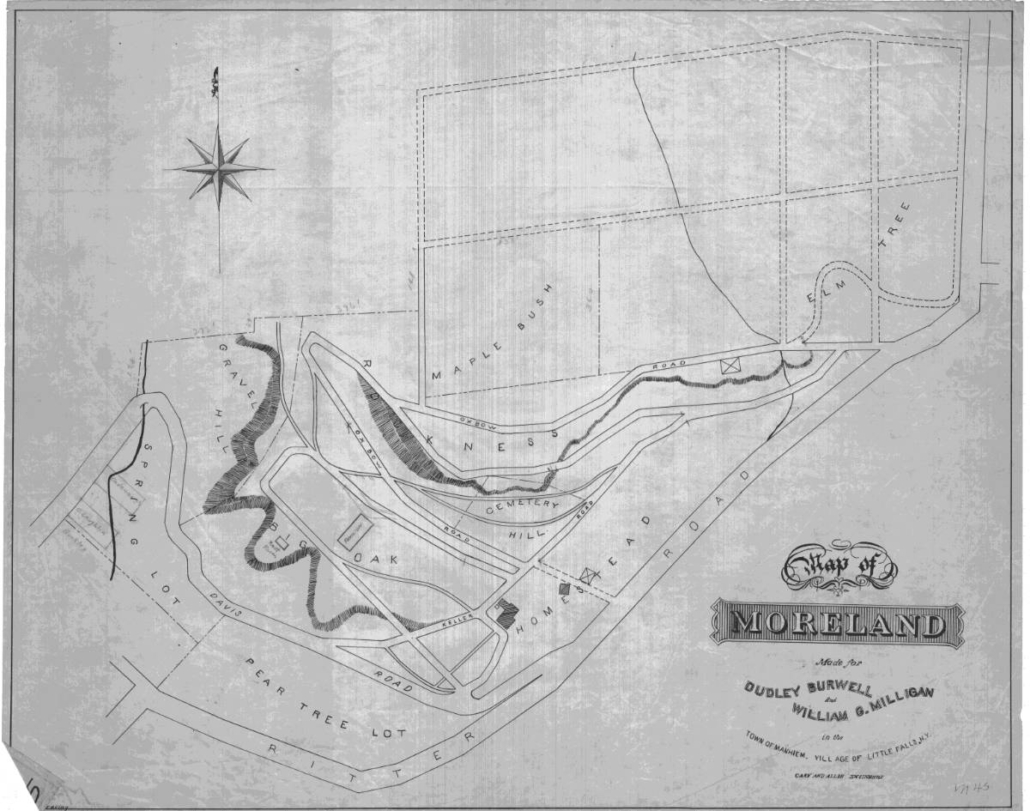 “Back in the day,” political party clambakes and picnics were also commonplace on the park’s spacious lawns. A September 21, 1888 newspaper article describes an outing and field days held by Irish societies at Burwell Grove (Moreland Park’s earlier name) that were attended by an estimated 2500 – 3000 people. Food, refreshments, (perhaps some alcoholic beverages?) and athletic sports filled the day. Events included exhibitions of strength, throwing of weights, jumping, baseball, foot races, and hurling. Different times.

As a youth, I regularly attended city summer programs at Moreland Park, often competing against kids from other park programs in hotly contested softball and basketball games, horseshoe matches, and other athletic contests. Chasing the softball “over the hill” as an opposing player circled the bases was a common occurrence.

WHO WAS DUDLEY BURWELL?

But how did this wonderful public space come to be? The philanthropic instincts of one man, Dudley Burwell, set everything in motion more than a century ago. This September marks the centennial plus ten years of the opening of Moreland Park in 1911.

By any measure, Dudley Burwell (1800-76) was a complex man, both a product of his time and a community visionary. Burwell was a Fairfield Academy attendee, a Herkimer County Bank board director, a prominent attorney, an Episcopal Church director, a Mason, the donator of the bell for the Academy at Little Falls, a Barnburner Democrat in post-Civil War America, a NYS Assemblyman, a community benefactor, a philanthropist, and the namesake of a city street.

Barnburners opposed both the emancipation of slaves before the Civil War and equality, citizenship, and Black suffrage afterwards. Unfortunately, these same sentiments still linger in American society and politics to this day.

It is not the intent of this article to pass judgment on Burwell’s political perspectives on racial issues. We must remind ourselves that Thomas Jefferson, author of the Declaration of Independence and our third president, owned over fifty slaves and fathered a number of mixed-race children. Judged by modern racial sensibilities, both Jefferson and Burwell would seem at best insensitive, but their accomplishments should not be besmirched.

In short, Burwell’s life was one filled with professional achievements and great community service. His most lasting community legacy? Moreland Park, the thirty-acre gem of lawn and woodland situated at a point that originally commanded a magnificent view of the gorge and valley beyond.

Burwell was born in Norway, NY in 1800, seventeen years after the Revolutionary War. He settled in Little Falls in the 1820’s and upon his passing on August 18, 1876, the land for Moreland Park was assigned to his friend William Milligan for his lifetime. When Milligan died on January 8, 1904, the future park became property of the City of Little Falls.

Burwell also bequeathed to the City upon Milligan’s death the balance of the Dudley Burwell Trust Fund. Milligan had been the trustee of that fund between 1876 and 1904 and at the time of his death, this trust fund contained some $17,000 (approximately $500,000 in 2021 value). The funds were to be used exclusively for park maintenance. 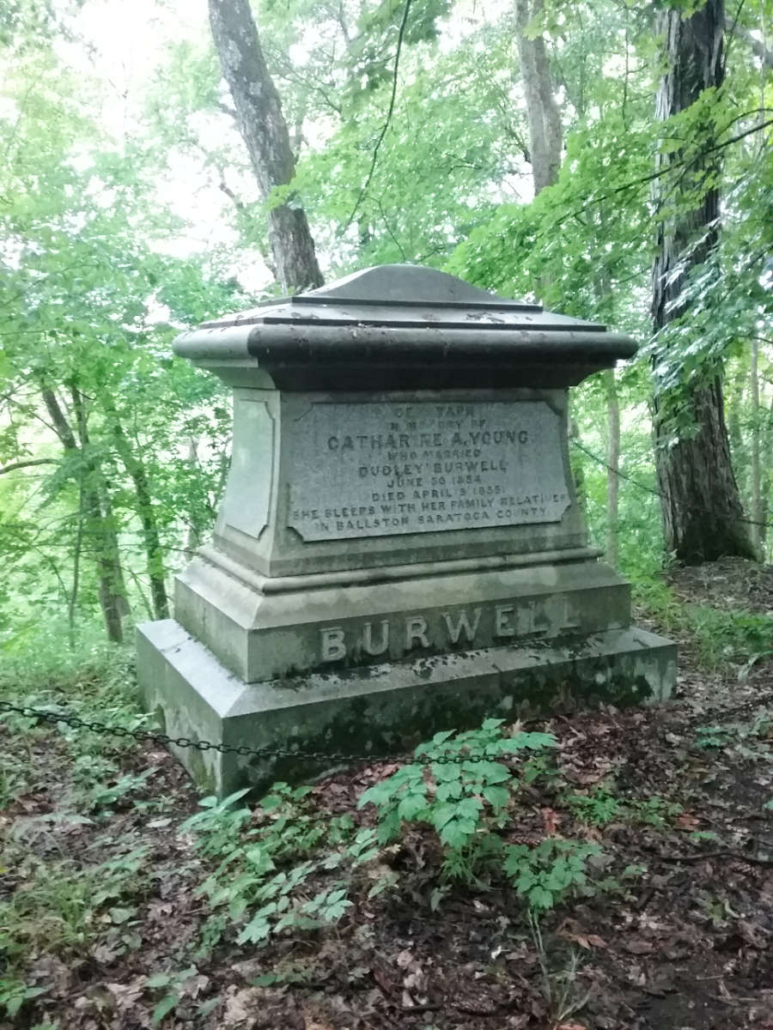 Burwell’s gravesite monument sits high on a hillside in the northern section of Moreland Park inside an enclosure of four wrought iron posts and connecting chains; an enclosure in need of repair. His gravesite has a commanding view of the grounds below as if Burwell still oversees his estate even in death. The pathways and trails in this northern section of Moreland Park meander through a mature hardwood forest. In the heat of summer, the area is shady, cooler, and often breezy.

At times, the Burwell gravesite is referred to as a cenotaph, most likely because Burwell’s wife Catherine, who died on April 5, 1835, less than a year after her marriage to Burwell on June 30, 1834, is buried elsewhere. The Moreland Park monument inscription reads: “She sleeps with her family relatives in Balston, Saratoga County.” Heartbreaking.

The Burwell family plot is in the Norway cemetery, but Dudley is not interred there. Strange tales of grave robbers exhuming Burwell’s skeletal remains and taking him on a horse-drawn wagon tour of Little Falls cannot be verified. Perhaps more tall tale than strange tale?

During the City’s 1911 centennial celebration, Mayor Timothy Dasey dedicated Moreland Park for public use. The park’s pavilion was also constructed in 1911. In recent years, extensive repairs have been made to both the wooden pavilion and the stone restroom building.

The origins of the name “cook house” associated with a second stone structure in Moreland Park is in question. Its name could simply mean that the building was where food could be cooked in the twin fireplaces or, the building’s name could have originated with the fact that the Cook farm and orchard was contiguous to that portion of Moreland Park.

The 1911 dedication ceremony was quite the event. Most attendees walked to Moreland Park that day in part because the roadway was only partly constructed at that time. Board of Public Works president Charles Conboy accepted the parcel of land on behalf of the City before Mayor Dasey addressed the large crowd on hand. Attorney M.G. Bronner spoke of Burwell as being upright and honorable in all of his business dealings. A band concert in the new pavilion followed.

Little Falls’ 1911 centennial included a number of other interesting events, including the opening of our post office, the dedication of the Octagon Church monument at the corner of Church and Prospect Streets amidst the weeklong celebration. Mayor Dasey must have been quite the busy City official that week.

Burwell was a gentlemen farmer on his land over the final quiet years of his life. His will stipulated that no undertaker should be involved with his funeral proceedings; several of Burwell’s workmen handmade his coffin from a butternut tree cut from his forest. The coffin was then placed in a lead “rough boy” container. It was said that this was because of the fear of grave robbery. It was said at the time of his passing that the lead “rough boy” matched well with Burwell’s solid rock-like character.

Burwell also figured prominently in the establishment of the first bank in Herkimer County in 1833, the Bank of Herkimer County, which of course is presently the Old Bank Museum and home base for the Little Falls Historical Society. Burwell owned the land on which the bank was constructed.

Moreland Park actually extends all the way downhill to the backline of Moreland Street properties. The historic roadway wall and walled lookout viewing area were constructed in the 1930’s Great Depression using FDR’s New Deal Public Works Agency funds. The lookout affords viewers one of the most beautiful panoramic views of the city below.

Fortunately, funding was secured in 2020 to repair the lookout itself which had fallen victim to neglect and vandalism. These repairs were carried out masterfully.

Unfortunately, the roadway wall remains in neglected condition and is in need of substantial repair. There were once horizontal wooden railings between the stone columns and above the walls in between these columns. Hopefully, city government will be able to orchestrate the resources to continue these repairs with the roadway side walls and restore this historic gem. The lookout and roadway walls should also be considered for National Registry of Historic Places status.

In final summation, Dudley Burwell’s prominent position in Little Falls history as a generous philanthropist and influential figure is well deserved. Think of him the next time you walk on “his street” or visit “his park.” Happy one hundred and tenth birthday Moreland Park and thank you Dudley Burwell!