The Little Falls Historical Society Museum would like to THANK YOU for your support throughout 2022! We also would like to wish you all a wonderful New Year! 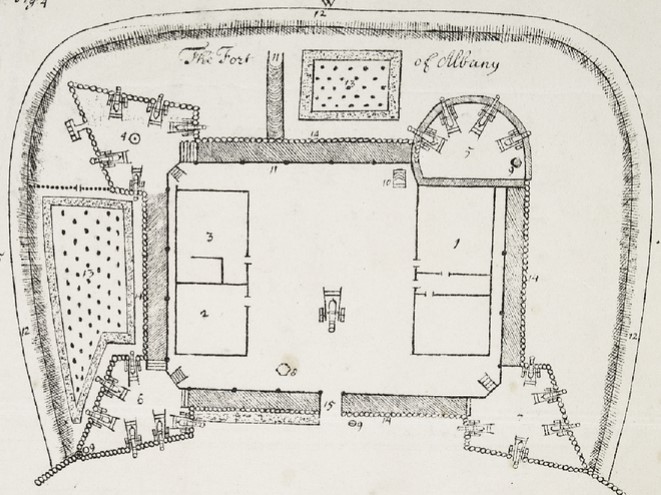 Map of the 1624 Fort Orange | Being the second fort built in the New Netherlands, named in honor of the ruling house of the Netherlands, the House of Orange- Nassau | The first fort was built in 1614 on Castle Island, Fort Nassau, which was abandoned in 1617 because of flooding, with Fort Orange being built 2 miles east of Fort Nassau | Photo from https://andyarthur.org/

Key to the 1624 Map of Fort Orange | Photo from https://andyarthur.org/

Dutch explorer Harmen Meyndertsz van den Bogaert left Fort Orange (Albany), and passed around the little falls, possibly south of Fall Hill, while visiting Iroquois villages on his way to Oneida Lake. Most likely, he was the first white person to have visited this area.

Harmen Meyndertsz van den Bogaert was born in Zeeland, Netherlands in 1612. By the age of eighteen, he had completed his apprenticeship as a barber- surgeon. In 1630, hoping to make his fortune, Harmen sailed to the New World aboard the ship the Unity, arriving at the settlement of New Amsterdam. New Amsterdam, which is present-day Manhattan, was the shipping port and was located at the mouth of the Hudson. This Dutch settlement eventually became the seat of government for the colonists of New Netherland.

In 1634, Harmen Meyndertsz van den Bogaert was 22 years of age and an Ambassador of the Indigenous Mohawk Indians. He was ordered by the Dutch West India Company to enquire with the Indigenous Iroquois Indians for an explanation for the lack of business and to restore the fur trade.

Harmen set off on an expedition, along with Jeronimus dela Croix and Willem Thomassen, to visit the Iroquois Confederacy Council on December 11, 1634. Harmen made a daily entry into a journal of the 100-mile journey through the vast wilderness to Oneida Lake. They stopped at numerous Iroquois villages along the way, which were called “castles” by the Dutchmen.

At Oneida Lake, the Iroquois Confederacy council members stated that they received good prices for their furs from the French, but were afraid of the French’s trading agents, who were from the Indigenous Huron Indian Tribe and would rather do business with the Dutch. Harmen arranged a verbal contract with the council, with the sachems being very pleased with the transaction. So pleased, that they sang a chant in van den Bogaert’s honor. The chant translated into them stating that he was a “magician” and that he was welcome and safe among the Mohawk, Oneida, Onondaga, Cayuga, and Seneca Tribes. The expedition arrived back at Fort Orange on January 21, 1635, with the trek taking six weeks.

The journal entry of the sachem’s chant was one of the first written documentation of the Indigenous Iroquois Confederacy. Harmen’s journal became lost for two and a half centuries and was located in Europe, in present-day Amsterdam in 1895. The journal’s discovery, amongst the van Rensselaer family archives, was made by General James Grant Wilson, who was a Scottish scholar and an officer within the 4th United States Colored Cavalry. The Dutch West India Company’s main shareholder was Kiliaen van Rensselear, a jeweler. The journal was made into the book “A Journey Into Mohawk and Oneida Country 1634-1635: The Journal of Harmen Meyndertsz Van Den Bogaert”. The journal chronicled the lives of the Indigenous Mohawk Indians and other tribes of Confederacy of the time period, along with the Iroquois language.

Harmen Meyndertsz van den Bogaert upon returning to New Amsterdam, built a bouwerie, which is a farm. He also invested into becoming a partner of the piracy ship La Garce, with Captain Willem Albertsen Blauvelt. They raided English ships in the Caribbean, which was an acceptable business enterprise for the time period.

He married Jillisje Claese Schouw, from Zierickzee, Holland, in 164?,(The date is illegible)) They had four children: Francoys van den Bogart, Meyndert van den Bogart, Lysbet van den Bogart, and Helena van den Bogart. They resided at what is known present-day as Stone Street in Manhattan, which was the first street to be cobbled in stone in 1658.

It is recorded that in September of 1638 “he recorded a will “inasmuch as he is at present about to go on a West India Voyage” leaving his entire estate to Jelisje, daughter of Claes Jansen of Zierickzee, except for a payment to his relatives of six Carolus guilders.”

Harmen Meyndertsz van den Bogaert was arrested on February 11, 1648, for being in a relationship with his male slave, Tobias, which was punishable by death. They were imprisoned and their trial was set for spring. They soon escaped and went to their Indigenous Mohawk Indian friends near the Lower Mohawk Castle Ossernenon, which is the present-day location of the Auriesville Shrine in Fonda, NY.

While at the longhouse of their Indigenous Mohawk Indian friends, they were confronted by Dutch soldiers. Harmen lit the longhouse a fire as a diversion, but they were both captured in the chaos that followed. The Dutch soldiers took Harmen and Tobias as prisoners back to Fort Orange. Again, Harmen soon escaped from the jail. Upon escaping, Harmen was being pursued by Dutch soldiers, when he attempted to cross the frozen Hudson River. While on the river, he fell through the ice and became trapped under the ice and drowned. (Where the present-day Interstate 90 Bridge crosses the Hudson)

Harmen’s Indigenous Mohawk Indian friends went to the Dutch West India Company demanding to be reimbursed for the loss of their longhouse and grain. Bogaert’s bouwerie, which was located at present day of 47th St. and Second Avenue, was sold to pay the debt for his act of arson. 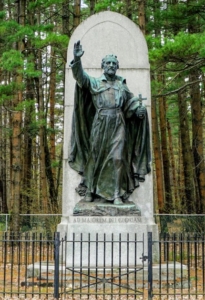 A Monument Statue of “Father Isaac Jogues” that was installed at Lake George by the State of New York on July 1939 | Father Isaac Jogues walked through the area in 1646 naming the lake ” Lac Du Saint Sacrament” translated to “Lake of the Saint Sacrament” | Renamed in 1755 by General William Johnson to that of Lake George in honor of King George II | Inscribed along the bottom with “Ad Majorem Del Gloriam” translated to “To the Greater Glory Of God” | Photo from https://www.lakegeorge.com/

A French Jesuit missionary, Father Isaac Jogues, was captured on the St Lawrence River by a large group of Indigenous Mohawk Indians on August 3, 1642. Father Isaac Jogues, along with the other captives, were taken south to the Mohawk River Valley to the the Castle Ossernenon at Fonda, NY, which is the present-day Auriesville Shrine. During his captivity, he endured thirteen months of severe torture by the Indigenous Mohawk Indians, who were called keepers of the Eastern Gate.

During his time in captivity, he was taken from this castle to visit the Western Tribes, near what is now Syracuse, NY. Father Isaac Jogues is the second recorded person to pass through Little Falls.

In 1642, Johannes Megapolensis, a dominie (pastor) of the Dutch Reformed Church at New Amsterdam tried to ransom Jogues’s release, but the Indigenous Mohawk Indians at Castle Ossernenon weren’t interested at this time. In the fall of 1643, a Dutchmen, Arent van Corlaer, who was the grandnephew of Kiliaen van Rensselaer, helped free Father Isaac Jogues.

Jogues was taken to Fort Orange, where his wounds were treated by Harmen Meyndertsz van den Bogaert. Upon healing, Jogues returned to France in 1644. 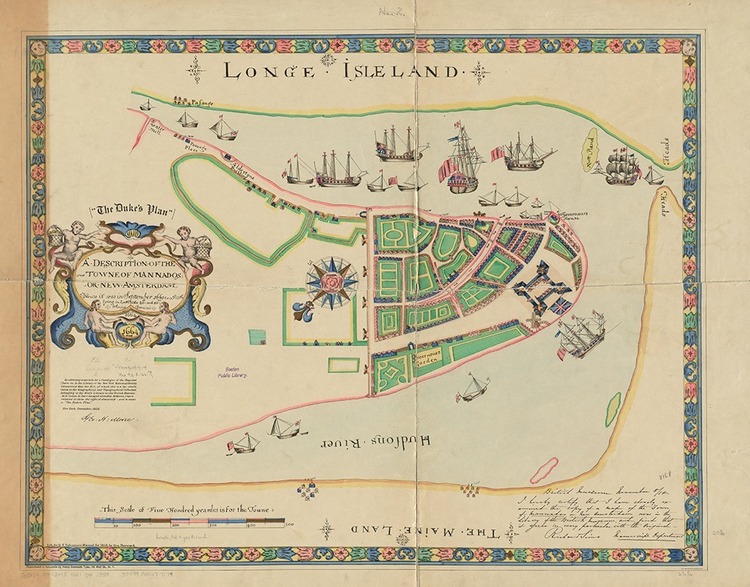 Jogues was back in the wilderness of New France, present-day Canada, resuming his work of bringing Christianity to the Indigenous Indians by 1646, when he was captured again, while traveling on his way from Montreal to the Mohawk Valley. Jogues was a two days walk from Castle Ossernenon when he was captured and was taken to the castle on October 17, 1646, with the Indigenous Mohawk Indians becoming enraged upon seeing him.

Recently, the Indigenous Mohawk Indians had endured the contagious disease of smallpox, killing many of their people and also a plague of worms that had destroyed most of their crops, leaving them feeling that the French were trying to destroy their people. Jogues fate was left to the sachems and chiefs, who had gathered at the largest village of the Indigenous Mohawk Indians at Castle Tionnontoguen. Castle Tionnontoguen was twenty-two miles west of Ossernenon and they had voted to set Jogues free from captivity.

A few of the warriors at Castle Ossernenon were against the decision made by the sachems and chiefs. On the evening of the 18th, they invited Jogues to a cabin for a meal and as he entered the cabin he was tomahawked from behind, being beheaded.

Father Isaac Jogues was born on January 10, 1607, in Orleans , France, the village of Joan Of Arc. He entered the Jesuit novitiate in 1624. Father Isaac Jogues was 29 years old in 1636 when he first came to the New World to spread Christianity. He died on October 18, 1646. He was canonized on June 29, 1930, by Pope Pius XI of the Roman Catholic Church. The Auriesville Shrine at Fonda, NY commemorates the martyrdom of Father Jogues and his missionary work among the Indians. His Feast Day is celebrated on October 19th in North America and on September 26th in Canada. 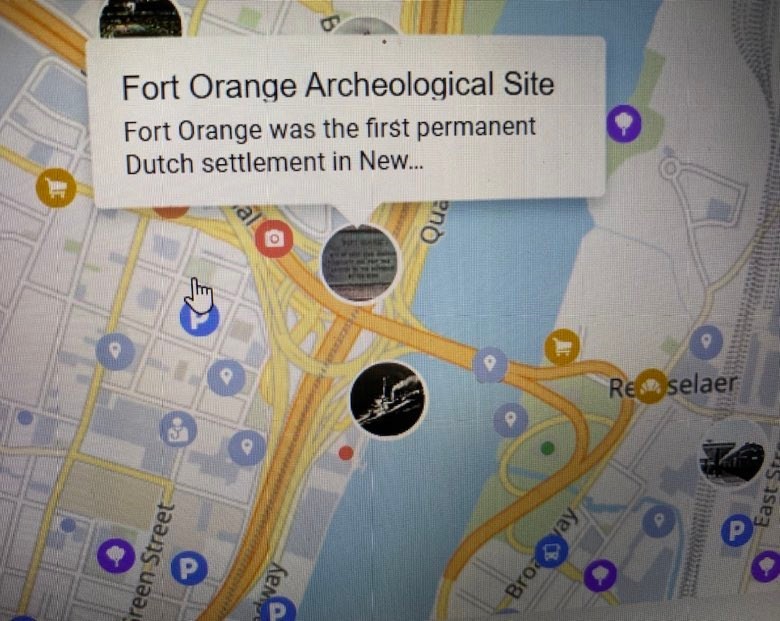 *THIS DAY IN HISTORY was compiled by Louis Baum, Article written by Darlene Smith with both members of the Little Falls Historical Society

Please share these posts so that others can learn about our historic city. Many Thanks
SOURCES: