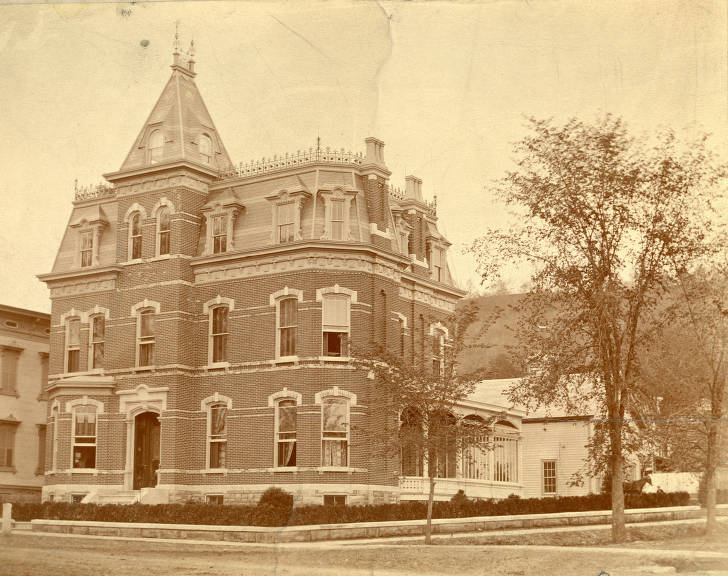 Judge Rollin Smith has bequeathed his beautiful residence, at the corner of West Main Street and Waverly Place, to the community for a public library. The property itself is one of the finest in the city, and for that matter in the county.

Franklin Bramer was a machinist from Fabius, NY who manufactured agricultural equipment. In 1865, he invented a mowing machine for farmers to use in their fields, which he called the “Young Warrior Mower.” In 1868, Bramer brought a Young Warrior Mower machine to Little Falls for a demonstration at a farm equipment exhibition. It captured the attention of a few wealthy industrialists, which led to the incorporation of a company to manufacture the “Young Warrior Mower”, here in Little Falls. Franklin Bramer served as the managing agent, while Arphaxed Loomis served as the company president. An average of 2,000 mowers were manufactured per year with a company workforce of over forty workers. 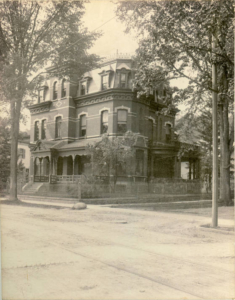 Franklin Bramer moved his family to Little Falls in 1868, with the new business commencing in December of that year. Bramer was born in Fabius, New York on May 23, 1834, to David and Electa Snow Bramer. His Grandparents, George and Sally Bramer, were German immigrants who settled in Orange County, NY. His wife, Augusta Frances Avrerell, was born in Massachusetts in 1833. Their daughter Nellie was born July 12, 1863, in Fabius, NY.

The newly organized manufacturing business was called the Warrior Mower Company. A manufacturing plant was built in 1820, of brick and stone, on the south side of the river, at Mohawk Street on Loomis Island, the location of the old Henry Heath Foundry. The new factory was four stories in height, with an exterior dimensions being 80 feet in width by 40 feet in length and had excellent waterpower. Mohawk Street on Loomis Island, along with all the mills, was removed when the Barge Canal was built between 1905 – 1918.

The Warrior Mower Company employed the Reddy Foundry to make their castings in their foundry and furnaces. Bramer received a letter of patent for his invention of the Young Warrior Mower piece of farm equipment in June of 1874. Notably, a 1878 newspaper article states that the first record of a telephone in Little Falls was a private line from Franklin Bramer’s residence to his office at the Warrior Mower Company.

Franklin Bramer built his family home at 10 Waverly Place of brick and stone in the style of second empire architecture. It was completed in 1878, with a mansard roof that was embellished with dormers and trimmed in wrought iron. The property was also encased with wrought iron fencing, most likely all made by the Reddy Foundry.

Michael Reddy came to Little Falls in 1839 and worked for the Smith Foundry on Furnace St. He eventually set up a business for himself on Mohawk St. on Loomis Island, in the old Loomis Mill. A few of his products that were made of cast iron can be seen today, such as the fencing at the Bramer- Smith House (present day Little Falls Public Library), the fencing at the former Soloman Petrie House on Waverly Place and Burwell St and the Chapman Moser Funeral Home fencing. The restored Frog Fountain in the back of the Little Falls Historical Society Museum also was produced by Reddy, and was donated by Gertrude Sabin, wife of Dr Fred Sabin. (This fountain was restored in 2018 by the Antique Cast Iron Co, LLC, with the Bob and Mary Ann Muccia Family being the main financial contributors.) 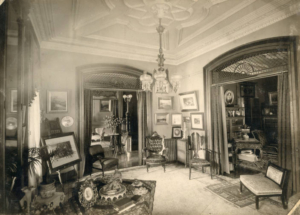 Judge Rollin Hulbert Smith was born in Little Falls on January 3, 1828. Rollin’s grandfather, Richard Smith, came from Rhode Island to Fairfield, NY shortly after the end of the Revolutionary War. Rollin’s father Christopher Smith, a Justice of the Peace in Fairfield, NY, moved his family to Little Falls in 1829. His mother was Nancy Hulburt Smith, a descendant of Thomas Hulburt, who earned recognition by Britain with a gift of 150 acres for his service in the Pequot War in Saybrooke. Ct in 1638. Christopher was a merchant and did a lot of his business on the Erie Canal. Rollin was the youngest of four children and the only child to survive past the age of twenty-three. His parents lost two sons during their infancy and their daughter Sarah, at the age of twenty-three. Judge Rollin H. Smith was eighty-three years old at the time of his death.

Rollin completed his schooling at the Academy of Little Falls in 1844, which he then went to work as a store clerk. He remained in this position of employment for the next few years, eventually moving on to study law in Judge George A. Hardin’s office. After a time, he took up his law studies with Judge Hiram Nolton and was admitted to the bar in 1863. He then proceeded with opening a law practice of his own within the village.

On May 1, 1877, Rollin requested permission to build a Band Stand in Eastern Park. He collected the necessary funds for the project, with its completion on Memorial Day of 1877, just in time for the dedication to the Soldier’s Monument in the park by the Grand Army of the Republic Organization.

From 1883 to 1889 Rollin was a Judge of Herkimer County. Judge Rollin Smith served as Vice President of the Herkimer County Bank in 1899, which the old stone bank now houses the Little Falls Historical Society Museum. 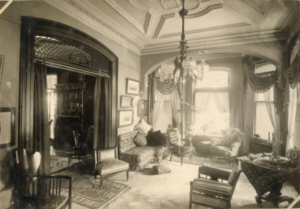 Judge Rollin Hulbert Smith bequeathed 10 Waverly Place to the City of Little Falls to be used as a library on December 29, 1910. At that time the Bramer-Smith House was valued at $5,000. Judge Smith passed away on February 7, 1911 and is buried in the Fairview Cemetery. In his will, dated October 10th, 1910, he left $10,000. annually for maintenance of the library and $2,000. for alterations needed to modify it from a family home to that of a library. The city was also to receive any money left over after his estate was settled, which amounted to about $25,000. He donated his personal library, along with all furnishings and personal collections of art and china. His will stated that no changes were to be made to the front parlor and reading room, that they were to remain the same forever, which they have.

The earlier history of the Little Falls Public Library goes back to a meeting that took place in 1814, with residents of Little Falls giving their consent and professing a desire to erect a library within the village. This was the beginning of the first Little Falls Public Library which was established and located in a rented room in a private residence. By 1820, the library, which was called the Union Library, with David Bensley serving as treasurer and David Petrie serving as librarian, held a public auction in the city offering books for sale, as the library was struggling financially. 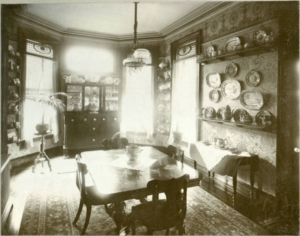 The Little Falls Public Library moved into the old Bramer residence on January 1, 1912. Miss Mabel Richards, who was appointed on July 1, 1907, became their first head librarian. She received a monthly salary of $37.50. Miss Richards was the daughter of Dr. Martin Richards, a dentist, and Frances “Fanny” Brockett Richards of 556 Monroe Street. Miss Richards also remained the librarian for the Little Falls school system, having earned her Librarian Degree from Cornell University. Miss Richards was born in Little Falls on October 13, 1884 and passed away in January of 1974, after serving as a librarian in Little Falls for over 53 years. She is buried in the Salisbury Cemetery, Salisbury, NY. Mrs. Norma Mehge was the Junior Librarian in 1912 and Mrs. Esther Frank served as the Clerk. Benton Hall Academy established their own school library in 1930.

October 8, 1912 saw the passing of Watts T Loomis, a lawyer, former judge, treasurer of the Little Falls, Dolgeville, and Piseco Railroad, and former President of the City of Little Falls. The estate of Watts and Adalin Loomis left a $5,000 endowment to the Little Falls Public Library for the purchase of law books. Additionally, he left his own collection of law books to the library. Also included was a collection of Loomis Family maps, profiles, and field books for public use.

The Little Falls Public Library embarked on a $1,5000,000 expansion in 1946. This expansion was mainly funded from a $500,000 endowment left by George L Smith, who passed on April 25th of that year. Out of this endowment came funding for a fireproof vault to house historical and rare books, which resides on the second floor of the library. George Smith was a wool merchant from 1880 -1932. His father, John, an English immigrant, was the first person to use Moss Island for an industry. John Smith built the still standing brick building on Moss Island to house the Adirondack Woolen Company. In 1958, this historic building was being considered to become a NY State Canal Museum. Instead, the Weighlock Canal Terminal in Syracuse, NY was chosen.

In 1982, a two-story addition to the Little Falls Public Library was completed, blending with the original architecture of the old Bramer House. This addition allowed for an Adult Book Section to be housed on the second floor, with the first floor designed with open space for donated collections, such as the Hurley Diamond Collection and the Edward Terry Butterfly Collection.

Over the years, the Little Falls Public Library has made further adjustments and additions. Two such additions were the installation of computers, funded by the Bill and Melinda Gates Foundation and a handicapped accessible entrance installed in 2016 by the Little Falls Construction Co.

In 2020, with a generous donation that was gifted by the Carrig Family in honor of Theresa Carrig, a major renovation of the children’s area was undertaken. The Children’s Center is now an inviting open space, with this area of the library being designed by John Senisi of Green Design Construct, LLC and was executed by Rock City Construction.

*THIS DAY IN HISTORY by Louis Baum, digitizing of the Historical Photos by Gail & Mike Potter, article written by Darlene Smith-Edited by Pat Frezza-Gressler. all members of the Little Falls Historical Society.

THANK YOU for your support throughout 2022
Scroll to top
error: Alert: Content is protected!