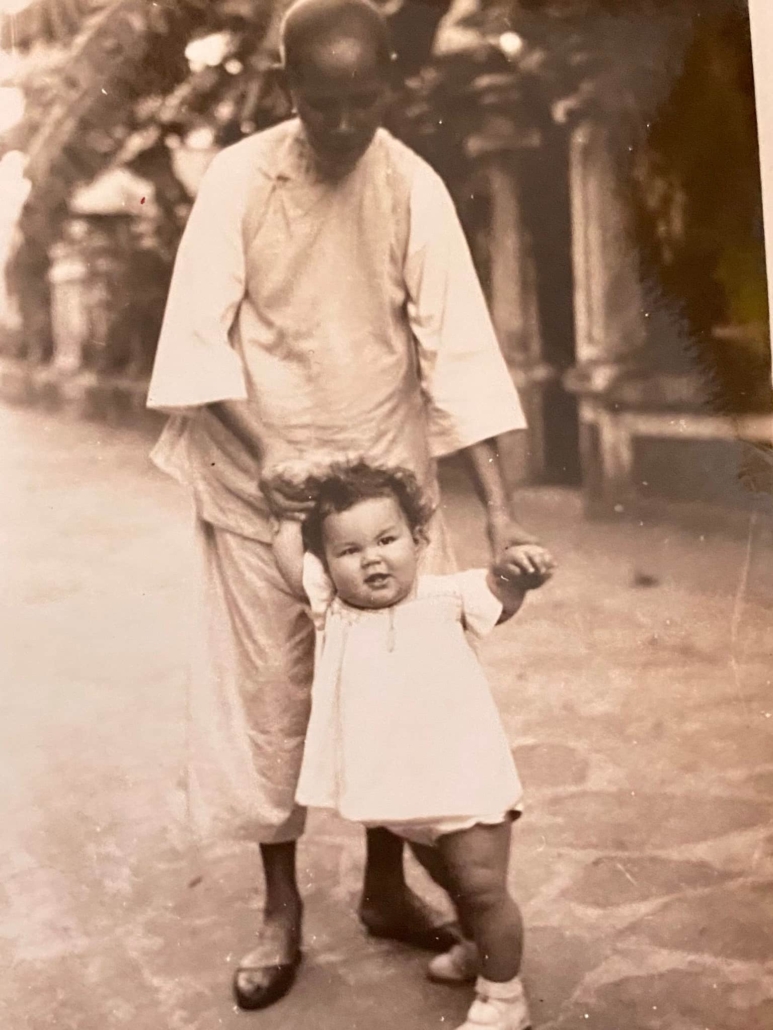 The author with Chinese amah, Ah Quay, in Manila, Philippines in 1935.

In February of 1935, while snow fell heavily over Herkimer County in upstate New York, a cable arrived at the home of The Honorable Homer P. Snyder on Ann Street in Little Falls. It announced the birth of H.P.’s first great grandchild. It read: “Mother and child doing fine. Father barely survived!” Thus, I arrived amidst tropical breezes in the city of Manila, on the island of Luzon, in the Philippines, set between the South China Sea and the Pacific Ocean. Manila: 8324 miles away from the city on the Mohawk River.

Front forward: late October 1935. The time had arrived to show me off in Little Falls. Thus, on a hot and humid day, we arrived at pier 7 in Manila, with much luggage, prepared to board the freighter S.S. Lee.  It seems I quite unwillingly left the arms of my amah, Ah Quay. I clung to her blue smock top. But then, zip up the gangplank I went with my father, the smell of sea spray and salt heavy in the air.

There were, I am told, twelve passengers, plus crew and cargo aboard ship. I have no actual memories of that first trip. I do have a photo album of black and white pictures featuring the sights of Hong Kong, Shanghai, Yokohama, Honolulu, San Pedro, and the passage through the Panama Canal. They were taken by my father with his brand-new Leica camera.

I feature in the arms of various amahs in whose care I was left while my parents went out on the town in whatever port we were in. Thirty-two days after leaving Manila, the ship steamed into the dockyards of Newport News, Virginia. We were almost there. My parents transported me and my luggage to a hotel. The next day, we took a train that eventually got us to New York City and the Plaza Hotel, another overnight and then the final leg from NYC to Herkimer.

Waiting on the platform at the train station, stamping his feet in the brisk November air was Mauice Murphy, H.P.’s chauffeur.

He bundled us into the car and in no time at all, we stepped over the threshold of 37 Ann Street into the arms of our waiting family. It had taken us a total of thirty-five days to travel from Manila to Little Falls. We were to make the same trip five times before I was five years old.

From the last of those five trips aboard the Canadian Pacific steamship Express of Canada my brain registered things that have remained indelibly stamped there over a lifetime, primarily the feel of tropical heat radiating up from the dock, the accompanying smell, the sea water slapping on the hull of the ship, while on the dock above a brass band played “Philippines, My Philippines” to the tune of Maryland, My Maryland.”

As the last of the luggage was loaded below deck, we were handed rolls of crepe paper streamers. Holding one end, we threw the other to family and friends waving goodbye to us from the pier below. Some of the streamers snapped too soon and fell in the water between the ship and dock. However, there was one that held on until the last minute as the ship, having backed out of the dock, turned, headed out to pass the island of Corregidor at the mouth of Manila Bay and on to open sea. I was left happy but with my hands sticky and sweat stained from the multi-colored streamers.

In the ports of Honk Kong and Shanghai, I can still see the stick-thin rickshaw men lined up on the dock waiting to pull passengers to nearby hotels. In port in 1937 Shanghai, I was young, but I can clearly remember hearing explosions and trying to look out the porthole to see what I must have thought were fireworks. In actual fact, it was the forces of Imperial Japan attacking the Chinese portion of the city. Shanghai was divided into concessions. There was a British Concession, a French Concession and we were tied up in the International Concession. We were safe from the destruction, but I did not know that, and I remember being frightened and wishing my parents would come back to the ship. They did and all was well for me, but not for the residents of Shanghai.

Unlike China, the United States at that time was not at war with Japan.

We sailed onwards to Yokohama. The amah I had in Yokohama wore a colorful kimono and I was certain she only had two toes on each foot. Her slippers were divided in such a manner that her big toe and the one next to it went on one side and the other three toes on the other side. Her white socks were fashioned for this. When the ship docked in Honolulu, I stood on deck with a little girl my age called Tanya Hallberg. The two of us threw coins into the crystal-clear water below, watching them swirl down, down, down. The waiting Kanaka beach boys dove in quickly to retrieve them. Shooting back out of the water, wide smiles on their faces, coins clutched in their hands; victorious.

There were girls in grass skirts, multiple flower leis around their necks, who were swaying to the music played by a ukulele band. Arms upraised, they told a story with their hands and fingers. Grace personified. Legend had it that Leis thrown overboard that headed back in towards Waikiki Beach meant you would be assured of a return visit. I threw mine as far as my small arm could throw, leaving the scent of jasmine in the air. They floated steadily back towards land. I now believe some legends prove true as since 1948, I have crossed the Pacific 121 times, stopping in Hawaii more than I can count.

January, 2022, just after Christmas, will find me flying back to the Philippines for my 122nd crossing. God willing and Covid-19 allowing. I will leave my home in Connecticut for my flight out of JFK on Philippine Airlines to Manila. The non-stop flight will take around seventeen hours. Quick efficient travel, bring a good book, watch numerous movies, eat two or three times, sleep and then you are there. No fuss, no muss, no bother. Get on in New York, get off in Manila. Why then do I long for those times when it took such effort to get anywhere? The answer is easy. Everything was heightened; the sights, sounds, smells, and above all, the savoring of the voyage. It was more an adventure.

In old-age, I am however, resigned to the fact that while somethings do remain the same, others do not. The house on Ann Street in Little Falls still stands and snow falls on it every winter, but H.P. Snyder, my great-grandfather, is long-gone: he and his passenger ship travel assigned to history.

Jessie Snyder Thompson Huberty is a member of the Little Falls Historical Society.