Older people in Little Falls, especially those sports fanatics, know who Hubie Brown is. However, the name may not be familiar with the younger folks. Hubie rose from the ranks of coaching basketball at St. Mary’s Academy in Little Falls to the apex of his profession, enshrinement in the National Basketball Hall of Fame.

It began with the “Niagara Connection.” Monsignor William Noonan, pastor at St. Mary’s parish, had studied for the priesthood at The Seminary of Our Lady of Angels, a part of Niagara University. His classmate, and good friend, was the treasurer at the university, and that made it easy for Father Noonan, who was a basketball nut, to steer St. Mary’s Academy graduates to Niagara and fledging basketball coaches to St. Mary’s. The assistant pastor, Father Joe Halloran, had also studied at Niagara and, on occasion, scrimmaged against Hubie Brown and the varsity basketball team. On August 30, 1955, it was announced that Hubie, ace Niagara player, would be basketball and baseball coach at St. Mary’s.

Hubie graduated from St. Mary of the Assumption High School in Elizabeth, New Jersey and his teams won state championships in football, basketball and baseball. At Niagara University, Hubie played three years for the legendary coach Taps Gallagher. At six foot, Hubie was a playmaking guard who averaged 8.3 points and 3.1 rebounds during his senior year for the Purple Eagles who had a 20 – 6 record. In his junior season the team had a 24 – 6 record and was ranked 16th nationally in the final AP poll. He played against a wide array of talented college players including Syracuse and NFL football great Jim Brown when he starred for the Orange basketball team. His teammates during his college career included future NBA stars Larry Costello (Syracuse Nats) and Ed Fleming (Minneapolis Lakers) as well as being a teammate and roommate with future NBA coach Frank Layden (Utah Jazz.)

Thirty-five candidates answered Hubie’s call for basketball players in early October, about one-third of the male student body in the upper grades at SMA. His first problem was the lack of experience since the entire starting five plus the two top reserves from the previous year’s team had graduated. Practices were long and intense, and the weeding began. Brown instilled a tremendous spirit in his team plus some imaginative Metropolitan-style basketball. Hubie also coached the junior varsity squad. David Dinneen, who had graduated from SMA the previous June, coached the CYO team.

In the first game of his coaching career, on November 24, 1955, the Gaels of St. Mary’s were blown out by St. Francis de Sales of Utica, 75 – 55.  In a return match a week later, they were again defeated by St. Francis in overtime 64 – 62. Significant improvement. The next evening, December 3, 1955, was Hubie’s first win of his long and illustrious coaching career, a 57 – 54 victory over Richfield Springs.

The Academy team was off and running and reeled off six more consecutive wins before losing a controversial game to Herkimer in overtime 76 – 74 that saw a last second basket by Chuck Ochar disallowed.  Included in the wins was an upset over the powerful Fort Plain quintet in the bandbox St. Mary’s gym.  Leading the team were the “Big Three” of Dar Mucica, Bill McEvoy and Chuck Ochar. During this stretch, Mucica, son of Sam Mucica star center of the 1930 Little Falls High School state basketball champions, averaged 26 points per game. In a 61 – 42 win over Frankfort, Dar scored 40 points eclipsing Dick Buckley’s single game scoring record.

The remainder of the season was a mixed bag, with the team losing five of the next seven games, three of the games by three points or less. Mucica continued to be stellar, breaking Tucker Shepardson’s season scoring record set one year earlier. Bill McEvoy was also a force to be reckoned with averaging 18 points per game. Mucica missed two games with a 102 F temperature, as St. Mary’s lost to Canajoharie by one point and was clobbered by the Don Churchill and Paul Mosny led Little Falls High School in the city championship 58 – 28. In the final game of Hubie Brown’s St. Mary’s coaching career, the team lost in a Catholic tournament 53 – 49 to St. John’s of Rensselaer and ended the season with a  9  win 10 loss record. Dar Mucica and Bill McEvoy were named to the Mohawk Valley Interscholastic League all-star team. 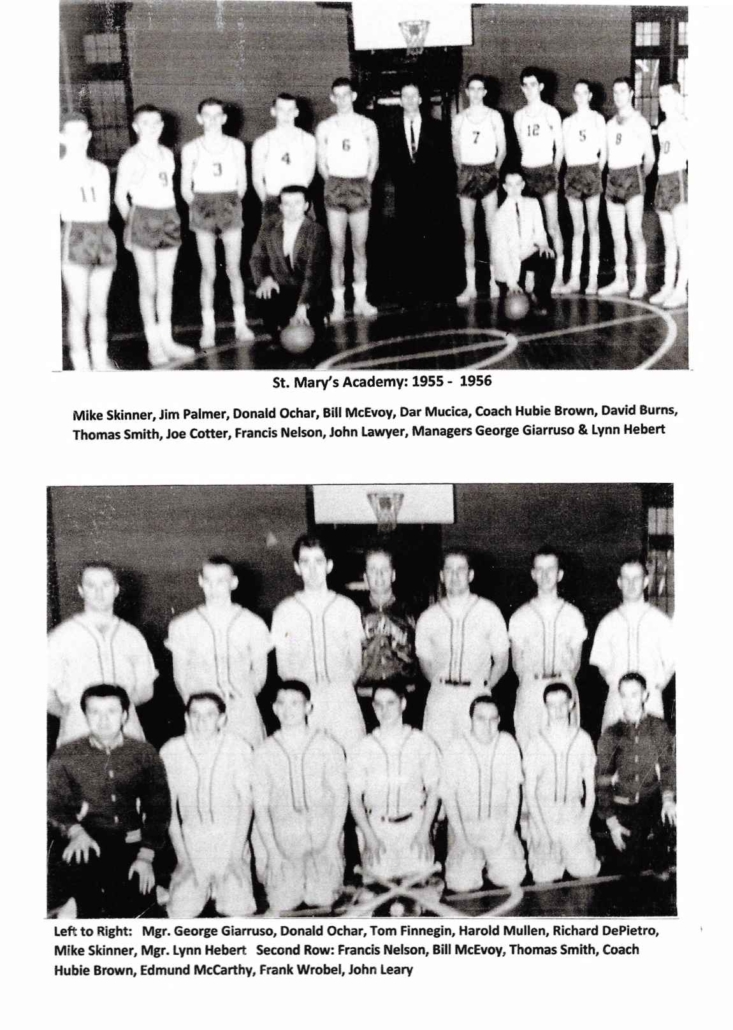 During the 1940s and 1950s Little Falls was well known for its outstanding semi-professional basketball teams.  For several years, the teams were sponsored by the Varsity Club, a large group of well- spirted, athletically minded men from Little Falls. The teams were made up of outstanding former local scholastic players along with top talent from other valley towns and some from Utica. During the 1955 – 1956 season, the team was backed by the Little Falls Moose Lodge and played in the strong Tri Hospital League centered in Utica. In addition to the local Moose, league members were Rome State, Marcy State, Utica State, Burkey’s, Pezdek’s, Syracuse State, and Rome Moose.  The Little Falls team was led by player-coach Joe Buckley, an exceptional three sport athlete at the high school in the mid-1940s. Team members included Lou Pohleven, Gordie Douglas, Joe Buckley, Walt Shepardson, Hubie Brown, Dick Buckley, Rudy Andrilla, Tucker Shepardson, Albie Mosny, Bernie Moynihan, Clarence Kohn, Brad Fenner from Herkimer, and Dick Frank and Dick Bass from Utica. As a member of the freshmen team at Niagara Dick Buckley remembers scrimmaging against Hubie on the varsity.

Basketball season was a balancing act for Hubie as he missed several games for the Moose when the St. Mary’s cagers and the Moose were in action on the same night. Never-the-less, he led the Moose scoring 492 points with an average of 23.4 points per game and earned a spot on the league’s first team all-star squad. The Moose finished third in the 8th Annual Little Falls YMCA Tournament with Hubie named to the all-star team. Two “side-games” stood out for the Moose. Hubie and Gordie Douglas represented Little Falls when the Mohawk Valley All-Stars went up against the nationally famous Arthur Murray‘s Girls All-Stars at the Mohawk Armory. In a more memorable game in Little Falls, the Moose played against the New Jersey YMCA state champions from Elizabeth, New Jersey whose players were old friends of Hubie. Both Hubie and his father, who accompanied the team on the trip to Little Falls, received loud ovations from the overflow crowd at the local YMCA. The Moose were ahead at half-time, but ended up losing the game by nineteen points. 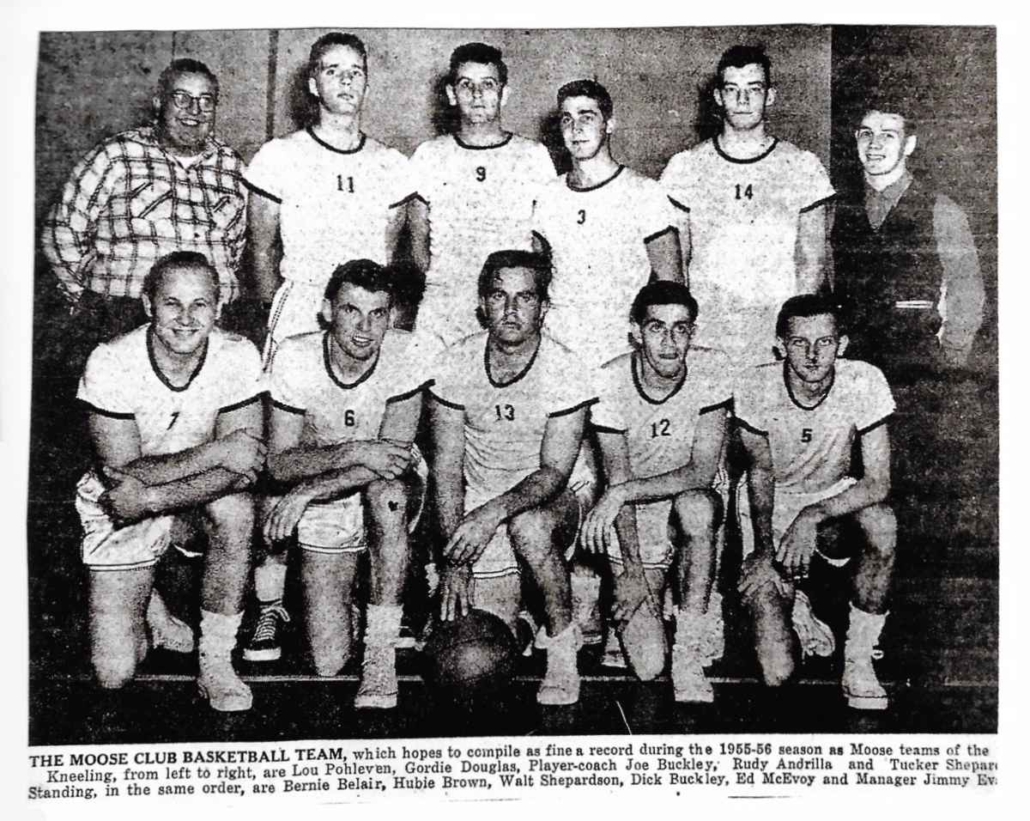 Although Hubie is best remembered for his basketball exploits, he was also an outstanding baseball player. His baseball team at St. Mary’s had the same problem as his basketball team – inexperience. After three straight losses SMA won its first game, a convincing 10 – 6 victory over St. Johnsville with Joe Cotter on the mound. The team only won two of the remaining thirteen games finishing with an overall record of 3 wins and 14 losses. Bill McEvoy, Joe Cotter, and John Leary were the team’s leading players.

Hubie also played for the local semi-pro team the Little Falls Independents. He was the team’s catcher and is remembered for his laser-like throws to second base and his clutch hits. Other team members included Gordie Douglas, Dom Perrino, Ted Wind, Jerry Shepardson, Paul LaQue, Billy Gerhardt, David Dinneen, and high school pitching phenom Don Churchill. His season with the Independents was cut short when Hubie got his draft notice and had to report to the US Army in California, after the school year ended, where he played for the Army basketball team.

While in Little Falls, Hubie lived on Petrie Street, a short walk away from St. Mary’s Academy. He ate many of his meals at Tony Papaleo’s Italian restaurant and had his favorite local bars. He frequently walked across the street from the St. Mary’s complex to visit Wilbur Crisp, the legendary Little Falls High basketball coach, to pick his brains about the finer points of the game. He set up youth basketball leagues with the games played cross court at the high school gym. Paul Mosny and Don Churchill were enlisted to referee the games. Hubie was a guest speaker at many events and was the featured speaker at the valley CYO banquet in Ilion.

After his stint in the Army, Hubie returned to Niagara and earned a master’s degree in education. He played briefly for the Rochester Colonels of the Eastern Professional Basketball League before the league folded. He then spent another nine years coaching in high schools in New Jersey before entering college ranks as an assistant coach at William & Mary and later at Duke. He then jumped to the NBA as assistant coach for the Milwaukee Bucks under former Niagara teammate Larry Costello. Here he helped coach Oscar Robinson and Kareem Abdul-Jabbar.

He was given his first professional head coaching position with the Kentucky Colonels in the old ABA  where his team won the league championship with a 58 – 26 record. When the two leagues merged in 1976, he became coach for the Atlanta Hawks. From 1976 to 1987 Hubie was head coach of the Atlanta Hawks and the New York Knicks, and after a fifteen year “layoff” he returned to coaching with the Memphis Grizzlies from 2002 to 2004. He was noted for his defensive mentality. Hubie was named NBA Coach of the Year in 1978 and 2004, the honors being separated by a span of 26 years. His overall record coaching in professional basketball was 559 wins and 592 losses.

Hubie began his long and distinguished broadcasting career after being fired by the Hawks and has, over the years, worked games for the USA Network, CBS, TNT, ABC, and ESPN working along-side the top broadcasters in the business. Still working occasionally, as he nears age 88, he is widely considered today as the finest NBA analysist. Hubie was nominated for a Sports Emmy in 1994 and 1999, and in 2000 was the recipient of the Curt Gowdy Award for outstanding contributions to basketball.

Hubie Brown reached the pinnacle of sports excellence when he was inducted into the Naismith Memorial Basketball Hall of Fame as a contributor in 2005. At Hubie’s invitation, I attended the NBA induction ceremonies in Springfield, Massachusetts along with Father Joe Halloran, Jim Dinneen, and Jerry Shepardson. During his acceptance speech Hubie acknowledged St. Mary’s and Little Falls. He said, “Way back in September in 1955 I was at my first day at a little Catholic school, St. Mary’s in Little Falls, New York. We had about 120 kids in high school and you are saying why is he bringing this up. Because this is what the award does for you. Sitting out in the audience tonight is Father Joe Halloran. He was there for me in ’55 and with him are three guys who helped me, and they are here tonight. And this is what knocks you out. This is such a meaningful thing to me. This is all about what this award does – it brings people like this out.”

At the ceremonies, I sat next to Pat Summit the famous coach of the Tennessee lady’s basketball team and she asked me what Hubie was like when he started coaching at St. Mary’s Academy way back in 1955. One thing that I can say is that he never forgot his roots!

David Dinneen is a member of the Little Falls Historical Society.