Dairy farming has been integral to life in Herkimer County since the first European settlers—the Palatine Germans—arrived in the Mohawk Valley in the early-1700s, and some of their descendants still operate dairies around Little Falls and elsewhere throughout the county.

The “technology” of dairy farming has changed dramatically over time but, in several other respects, the vocation hasn’t changed much at all. There persists the long hours and hard, physical work (cows must be cared for and milked twice or more daily, year around), there is adverse weather, crop infestations, and cattle infections to contend with and, from time-to-time, hostile economic, political, and social conditions. Not insignificantly, there also remains the steadfast commitment to sound animal and crop stewardship, as well as strong, family bonds passed down from generation-to-generation. Dan Casler (age 57) of the Casler Farm, just to the south of the City of Little Falls, is among the tenth generation of Caslers dairy farming in the area. His son, Jeremiah (age 27) is, thus, among the eleventh. In mid-May of this year, I visited the Casler Farm and spoke at length with Dan and Jeremiah about what it’s like and what they feel it takes to successfully operate a family dairy throughout all the good, bad, and sometimes seemingly impossible periods which they and their predecessors endured.

In addition to his busy farm life, Dan is a member of the board of directors of the National Farmers Organization (NFO), a founding member, director, and currently director emeritus of The Institute for Rural America, and a member of Farmers in Marketing with Organic Valley (a farmer-owned co-op). He recently ran for and was elected to serve as Town of Little Falls Supervisor, and he served as a member of the Little Falls City School District Board for seventeen years, coached youth wrestling for twenty years, and initiated a community garden with his church. As was his father before him, Dan is a firm believer in dairy farmers organizing through co-ops and otherwise to protect and promote their economic and other interests, and in withholding milk from the marketplace (“dumping”) if that is required to achieve just pricing for dairy farmers. He recalls several instances of “dumping” in his lifetime; the first when he was only about five and his dad decided to withhold milk.

“There was a small brook just outside of our milkhouse, and one day I discovered it running white. When I asked my dad about it, he explained he’d opened the valve to our bulk milk tank and sent our hard-earned milk down the drain.” So had several other Herkimer County and Upstate New York dairy farmers. “Dumping” by area dairy farmers occurred most recently in the late 1960s and mid and late-1980s. “You can say what you want about dumping,” Dan said. “But every time we did the wholesale price of milk rose such that we stopped hemorrhaging money.”

Subsequently, I’ll share more of my conversation with Dan and Jeremiah, but first, some of the history of milk strikes in the Upstate New York region. 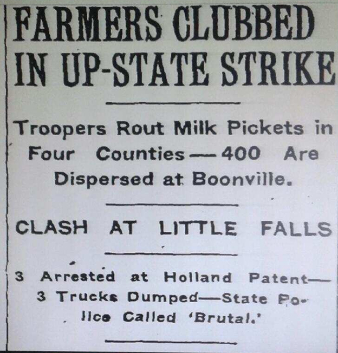 Much has been written about the thriving cheese manufacturing of the Mohawk Valley in the latter half of the nineteenth century, when “Herkimer County was the cheese-making center of the United States.” In those times, family farmers who produced the milk and made cheese enjoyed far more economic influence and equity than did farmers in the early twentieth century with the advent of refrigeration, and beyond. With refrigeration, there resulted the shift from cheese manufacturing to the sale of “fluid milk”—the high-quality, Grade A milk packaged and sold primarily to consumers for drinking and “table use”. With that also came the rise of large, corporate milk distributors which wrested monopolistic control of enormous consumer markets, such as the New York and Boston Metropolitan Areas. Precipitating the Great Milk Wars of the 1930s, the so-called “big three” of these corporations—Sheffield Farms, Borden Inc., and the U.S. Dairy Products Company—also effectively controlled upwards of seventy-five percent of the entire Upstate New York wholesale milk shed supply, and they forced such low wholesale prices upon family dairy farms that, in many cases, they were unable to cover their normal operating (production) costs or even feed their families, let alone generate a modest profit. Their practice of “squeezing” family dairies to enhance their already considerable profits brought with it the greatest period of unrest among the state’s family dairy farmers in their long history. The result was multiple “milk strikes,” many of which involved “dumping” or otherwise restricting the flow of their milk to distributors, and some of which, unfortunately, involved violence. 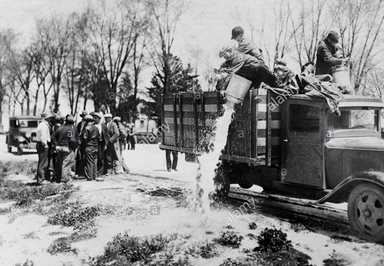 Government neglect and consumer indifference also contributed to precipitating the Great Milk Wars of that decade. Such discontent among dairy farmers was not new; it had its roots in the late nineteenth century and continues to the present day. It has been “an ongoing conflict pitting business against health, farmers against consumers, bottlers against unions, distributors against each other, and round and round.”

A number of Upstate New York communities, certainly including Little Falls, were seriously impacted by the 1930s strikes. Most notably among them was the Dairy Farmers Union strike of August, 1939 which, along with previous farm union actions of that decade, led to some reforms that continue to aid dairy farmers, though perhaps inadequately, to the present day. At central issue in 1939, as usual, was the suppressed prices paid by the “big three” milk distributors to dairy farmers, the vast majority of which were small, family operations. Many family farms passed down through generations were threatened with, and in too many cases, thrust into bankruptcy and foreclosure. But unrest during the decade was, by no means, isolated among small family farmers.

“During the Great Depression in the United States in the 1930s, disruptions and civil disobedience were typically associated with organized labor, although it’s important to remember that farm strikes or “holidays” also played an important role in shaping New Deal politics and the creation of the dairy price support system.” Striking farmers demanded “price parity”. “Parity is the missing piece of the pricing issue of farm commodities. [It’s] the equalizing factor of farm products in relation to other goods and services in the economy,” said Dan. Price parity is a central issue for farm co-operative organizations: 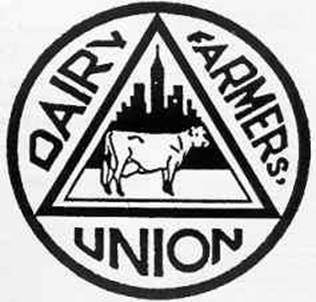 “The concept of parity pricing first surfaced in the early 1900s, when people realized that agriculture production must exchange on par with the rest of the economy, because the U.S. economy is based on division of labor. Once farming became proficient enough to provide more food than the individual farmer needed to feed his family, the spinoff of labor then allowed the development of an industrial economy. So even though agriculture has fewer people involved in farm production, it still has the same economic function to perform and must generate the same buying power as all other sectors of the economy. In other words, to function properly an economy in a democratic republic must be a par economy.”

A Brief History of Parity Pricing and the Present Day Ramifications of the Abandonment of a Par Economy,

Archie Wright, who founded the Dairy Farmers Union in 1936, and who was formerly an organizer for the Industrial Workers of the World (IWW), “had returned to his father’s thirty-nine cow dairy farm in Heuevelton, New York a few years earlier. Drawing upon his considerable experience as an IWW organizer, “on October 15 [1936] Wright announced the formation of the Dairy Farmers Union (DFU) at the Town Hall in Canton, New York.”

In addition to effectively organizing dairy farmers, Wright also garnered public support for their plight through openly advocating non-violent resistance in frequent public speaking engagements, newspaper editorials, and radio broadcasts on WFBL in Syracuse. It was in such addresses that Wright announced members of the DFU had agreed, as an alternative to “dumping”, to deliver milk withheld from the corporate distributors to New York City orphanages and hospitals, at no charge. Partly as the result of this, “[p]ublic [s]entiment was largely with the union throughout the strike.”(5) Wright was also well acquainted with farmers’ rights under what many still consider the “Magna Carta” of farm cooperatives: the Capper-Volstead Act of 1922. Under that and other, companion legislation, members of farmers’ co-operatives were effectively exempted from prosecution under the Sherman Act, the Clayton Antitrust Act, and the Federal Trade Commission Act. While the large, corporate distributors and their supporters “red-baited” Wright, attempting to paint him and other DFU members as “Marxists” and “Communists” (particularly serious condemnations in that era), they could establish no grounds to prosecute them for organizing their union and withholding their milk from the market in order to negotiate and realize a fair price for it.

The difference or spread between what farmers received and what consumers paid for milk was a central issue in all the strikes.

At the time of the 1939 Dairy Farmers Union strike, for instance, consumers were charged more than five times what farmers were paid for milk. While a portion of that difference was certainly justified by the distributors’ processing, packaging, transportation, and other costs, a “spread” of that magnitude was not, and resulted in the distributors reaping inordinate profits at the farmers’ expense. The organization of farmer-owned cooperatives, such as Organic Valley has gone a long way in alleviating the price-spread problem, but other, serious challenges persist today.

“A big part of the problem,” said Jeremiah, “is consumer indifference to farmers. Many consumers expect to conveniently obtain adequate amounts of safe, healthy food at affordable prices, but have little if any appreciation for what farmers go through, and what it costs them to produce it.” Another, says Dan Casler, is “small farmers’ reluctance to organize, whether due to their political leanings (e.g., abhorrence of unions), or just because of their independent natures.” I would add a third: that farmers, certainly including those of Herkimer County, have never fully received the respect and appreciation their vocation deserves.

Emerging appreciation and demand for organic agricultural products has alleviated some of this, and certainly has helped some small farmers survive and even thrive. The Caslers have taken full advantage of this. Their dairy of some 180 cows (75% Holstein and 25% Jerseys) is certified grass-fed organic. As a member of the Organic Valley co-operative, the Casler Farm presently receives around $34 per hundred pounds of milk ($2.95 per gallon), or about twice what farmers are paid for conventional, non-organic milk. With receipt of that price, and through sound management principles, the Casler Farm generates an adequate, though certainly not excessive profit.

“We work hard and smart and try to keep things simple,” said Dan. For instance, notwithstanding its size, the Casler Farm employs only two full-time and two part-time employees: Dan and Jeremiah being the full-time workers. “We also maintain a manageable amount of debt,” he said. That makes huge sense when operating a business that produces a commodity often subject to intense price volatility due to a variety of factors beyond farmers’ control. The formation of effective farmers’ associations, such as the National Farmers Organization (NFO), and farmer-owned retail groups, such as Cabot Creamery Co-operative and Organic Valley Co-operative, have contributed much to farmers’ achieving their political voice and economic fairness. But there remains no substitute for the hard work, sound management, and passionate commitment to farming required for surviving and thriving over multiple generations. Over the centuries family dairy farmers in Herkimer County, like so many who dwell there, have experienced (and continue to experience) much change. But, as for their love of and devotion to their vocation, the more things change, the more they stay the same.