An unknown caller left a little box containing $80 in gold at the home of Rev. Francis Bellamy. An accompanying card informed him that it was from his friends in the Baptist Church. 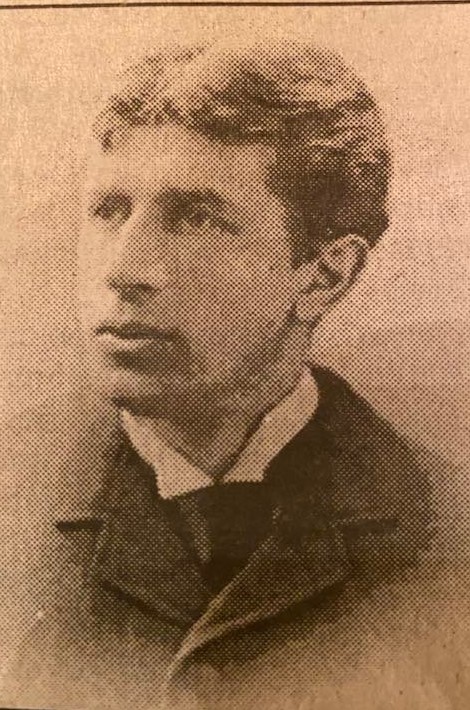 Francis Bellamy was born on May 18, 1855, in Mount Morris, NY, which is about 40 miles south of Rochester, NY. At the time of Francis’s birth, his father Reverend David Bellamy, was the minister for the First Baptist Church in Mount Morris. In 1859, Reverend David Bellamy accepted a position as pastor for the First Baptist Church in Rome, NY, where he then proceeded to relocate to Rome, along with his wife Lucia, and their toddler son, Francis Julius.

Rome was where Francis spent his childhood, with graduating high school in 1872, from the Rome Free Academy. He chose the University of Rochester to continue his education and while there, became a member of the Alpha Delta Phi fraternity. He graduated with the class of 1876.
At the age of twenty-one, with permission from the First Baptist Church, he enrolled at the Rochester Theological Seminary to study ministry, completing his studies in 1879. He was well known for being an academic, as well as a journalist.

Francis accepted a pastorate position at the First Baptist Church in Little Falls, NY on December 1, 1879. While Francis was getting settled in at Little Falls, the First Baptist Church of Rome sent designated ambassadors from the Council of Ordination to Little Falls to officiate Francis’s Ordination on December 14, 1879. Francis received a letter from the Rome church, at the end of that December, stating that his membership within the church had been terminated.

While at Little Falls, Reverend Francis Bellamy made his first residence at the Girvan House, which is the present-day Snyder Apartments at 2-8 West Main Street. He married Harriet Benton on June 1, 1880, in her hometown of Newark, NY.

On October 21, 1881, the Young Men’s Christian Association Society (YMCA) first functioned in Little Falls as a “reading room” for young men of the railroad, for their use to study Christianity, with Rev. Francis Bellamy serving as the societies secretary. In the beginning, the society used rented rooms for their meetings in a building on the corner of John and Second Street. David H Burrell became involved with the society and in December of 1910 donated $50,000. to build the YMCA building, to meet the needs of the society.

By 1882, the Bellamy’s were residing at 25 Alexander Street, here in Little Falls. In June of 1881, the condemned Catholic Church on Petrie Street was torn down by Thomas Dale & Sons for $4,525. The used bricks were then used by the Dale’s to construct three beautiful brick Victorian residences, one being on the corner of Alexander and Petrie Street, and the next two brick homes beside it that face Salisbury Street, with 25 Alexander Street being one of those structures. On September 20, 1882, their son John Benton was born at Newark, NY, with him spending his first three years of life at Little Falls.

Rev. Francis Bellamy had a love for baseball, which he played in Eastern Park, since Girvan Square Park (Veteran’s Memorial Park) wasn’t established until 1905. A long-deceased editor, John Crowley, of the Evening Telegram, had given an interview to the former city historian, Edward J. Cooney, for Cooney’s book “A History of the City of Little Falls, New York” in 1961. Crowley states “…used to recall that the Rev. Francis Bellamy, later famous as the author of the Pledge of Allegiance to the flag, used to tip him five cents for a pail of drinking water, instead of the usual penny.” Crowley had to be around 10 years of age as a water boy and had lived across the street from the park at 777 East Main St.

On the 5th of January 1883, an unknown caller left a box containing $80 in gold at the home of Rev. Francis Bellamy. An accompanying card informed him it was from his friends in the Baptist Church. While ministering at the First Baptist Church over a period of six years, the congregation paid off a debt of $6,000., which is about a debt of $200,000. in today’s money, which must have been a difficult feat for the church to accomplish.

Bellamy was an acting member of Little Falls Masons Lodge No. 181 while he resided in the village.

Rev. Francis Bellamy left Little Falls on February 1, 1885, for a pastorship at the Dearborn Baptist Church in Boston. The Bellamy’s welcomed another son, David, on October 30, 1888, in Roxbury, MA. In 1890, he accepted a position at the Bethany Baptist Church, also in Boston. In 1891, Bellamy stepped away from the church because of his deeply set views on socialism.

Daniel Sharp Ford, a member of Bellamy’s congregation, was the co- owner of the weekly “Youth’s Companion Magazine”, which Ford had purchased the publication in 1857. Ford soon bought out his partner and formed the Perry Mason Company. Ford started offering contests and prizes as a marketing gimmick to increase subscriptions. The publication had 7,000 subscribers in 1857 and by 1890 had over 400,000 subscriptions, so the gimmicks were working. James Bailey Upham, who was Ford’s nephew by marriage, was appointed as the head editor of the marketing department.

YOUTH’S CAMPANION MAGAZINE
Ford hired Bellamy as a staff writer to assist Upham, since he excelled as a journalist, writing articles on Christian Socialism and wrote for the newspaper, The Dawn, for the Society of Christian Socialists, where he also served as vice president for the society. Ford wanted Bellamy to promote his campaign to bring awareness to patriotism. The goal was to bring patriotism amongst the immigrant schoolchildren and U.S. born schoolchildren, alike, and to put a flag at every school.

In 1892, Upham brainstormed the idea of having the schoolchildren raise funds to purchase the flags themselves and for a flag to be put in each classroom. The Youth Companion Magazine sent out free cards to each student who wished to obtain a school flag. The cards were printed with the wording “This certificate entitles the holder to One Share in the patriotic influence of the school flag” with the cards being sold by the students for 10 cents each. After the student had sold 100 cards, the money was then sent to the publication and the student received a classroom flag in return. Over the course of the first year, 25,000 flags were put into classrooms.

The 400th Anniversary of Christopher Columbus’s voyage to America was the theme set for the World Fair in Chicago, Illinois for 1893, known as “The Columbian Exposition.” Upham also then conceived the idea of a flag ceremony and of an anthem for the children to recite, feeling that most families wouldn’t be attending the exposition, but could celebrate in their own villages. Upham wanted to link the flag ceremony with Columbus Day and a ceremony was set for October 21 of 1892, to celebrate. Upham approached Bellamy to write up an anthem for the schoolchildren to recite at their flag ceremony. Bellamy also contacted Washington to obtain President Benjamin Harrison’s help, to promote the national school flag ceremony. Through President Harrison’s influence, Columbus Day was made a national holiday in 1934 by President Franklin Delano Roosevelt and was celebrated on October 12th, on the anniversary of Christopher Columbus reaching the Bahamas on October 12, 1492.

THE PLEDGE OF ALLEGIANCE

The first person to write a pledge was in 1885 by Civil war veteran Colonel George Balch. Balch’s Pledge went as follows: “We give our heads and our hearts to God and our country; one country, one language, one flag.” Balch’s Pledge was replaced in August of 1892, when Reverend Frances Bellamy wrote a revised pledge for the schoolchildren’s flag ceremony celebration. Bellamy’s Pledge went as follows: “I Pledge Allegiance to my Flag and to the Republic for which it stands—one nation indivisible—with Liberty and Justice for all.” Bellamy’s Pledge was printed in the Youth’s Companion Magazine on September 8, 1892.
Upham designed a salute to go along with Bellamy’s Pledge, which was an extended raised arm, in the direction of the flag, with the palm facing the floor. So, for the first time, on October 21, 1892, tens of thousands of schoolchildren recited the Bellamy’s Pledge.

The Bellamy’s welcomed another son in 1896, who didn’t live past infancy.
In 1897, the Youth’s Companion Magazine was changed into a family magazine, with having over 500,000 subscriptions.

Over the years, Bellamy’s Pledge had been met with a few alterations. In 1942, “my flag” was changed to “the flag of the United States”, with “America” being added in 1943. On June 22, 1942, Congress officially recognized the Pledge. On December 22, 1942, the salute was changed to the right hand placed over the heart, while standing and facing the flag, because of the original salute being used by Hitler’s followers in WWII. The official naming of the Bellamy’s Pledge to that of “The Pledge of Allegiance ” took place in 1945. On June 14, 1954, Flag Day, “under God ” was added by President Eisenhower, setting the United States apart from atheistic nations, with citizens of the time being concerned about communism.

All states schools except for Nebraska, Hawaii, Vermont, and Wyoming, require The Pledge Of Allegiance to be recited at the beginning of each school day. A person can refrain from doing so, respectfully, without punishment. Most government meetings open with the Pledge of Allegiance, as well as most meetings of organizations.

Is it just coincidence that Bellamy’s hometown of Rome, NY is also home to the first official “Stars and Stripes Flag”? Up until July 3, 1777, the “Grand Union Flag” also known as “Continental Colors”(the American flag) had the British Union Jack in the upper left corner , with 13 alternating red and white stripes. On June 14, 1777, the Continental Congress passed the Flag Act, stating that the official “flag of the United States be made of 13 stripes, alternating red and white, that the union be 13 stars, white in a blue field, representing a new constellation.”

The first official Stars and Stripes Flag was flown on August 3, 1777, during the Revolutionary War at the Battle of Fort Schuyler (Fort Stanwix), with the flag being made on that Sunday morning, since the soldiers had no ensign to fly at the fort as they entered the battle. Legend has it that the flag was pieced together by the women of the fort from strips of white cloth from soldier’s shirts and bandages, red petticoats from soldier’s wives and from Captain Abraham Swartwout’s blue military cape. The siege lasted three weeks, with the fort being the only fort during the Revolutionary War not to surrender.

Flag Day is observed yearly on the 14th of June. In 1916, President Wilson issued a proclamation for June 14 to be observed as the National Flag Day. President Coolidge did the same in 1927. President Harry S. Truman declared Flag Day on August 3, 1949, with Proclamation 2654. The United States Flag has had 27 design alterations from the original 1775 Grand Union Flag, up through July 4, 1960, when the state of Hawaii was added.

Former city historian, Edward J. Cooney, Herkimer County Chairman for New York State’s Year of History for 1959, acted as the Master of Ceremonies in the Dedication of the Reverend Francis Bellamy Park on September 12, 1959. The park, which is at the triangular intersection of East Ganesvoort, Burwell, and Salisbury Streets, here at Little Falls. The festivities began with a parade through the village.

The First Baptist Church of Little Falls dedicated a plaque in Bellamy’s memory on June 11, 1963, for him serving their congregation from 1879 through 1885. The plaque was placed on the front of the church, which is located on Albany Street.

Harriet Benton Bellamy passed away on November 3, 1918, at the age of 61 years of age. Bellamy married for the second time in 1920 to Marie Marin. Reverend Francis Bellamy died in Tampa, Florida on August 28, 1931. He is buried in Rome Cemetery in Rome, NY, along with both of his wives.

The Y.M.C.A.
Scroll to top
error: Alert: Content is protected!