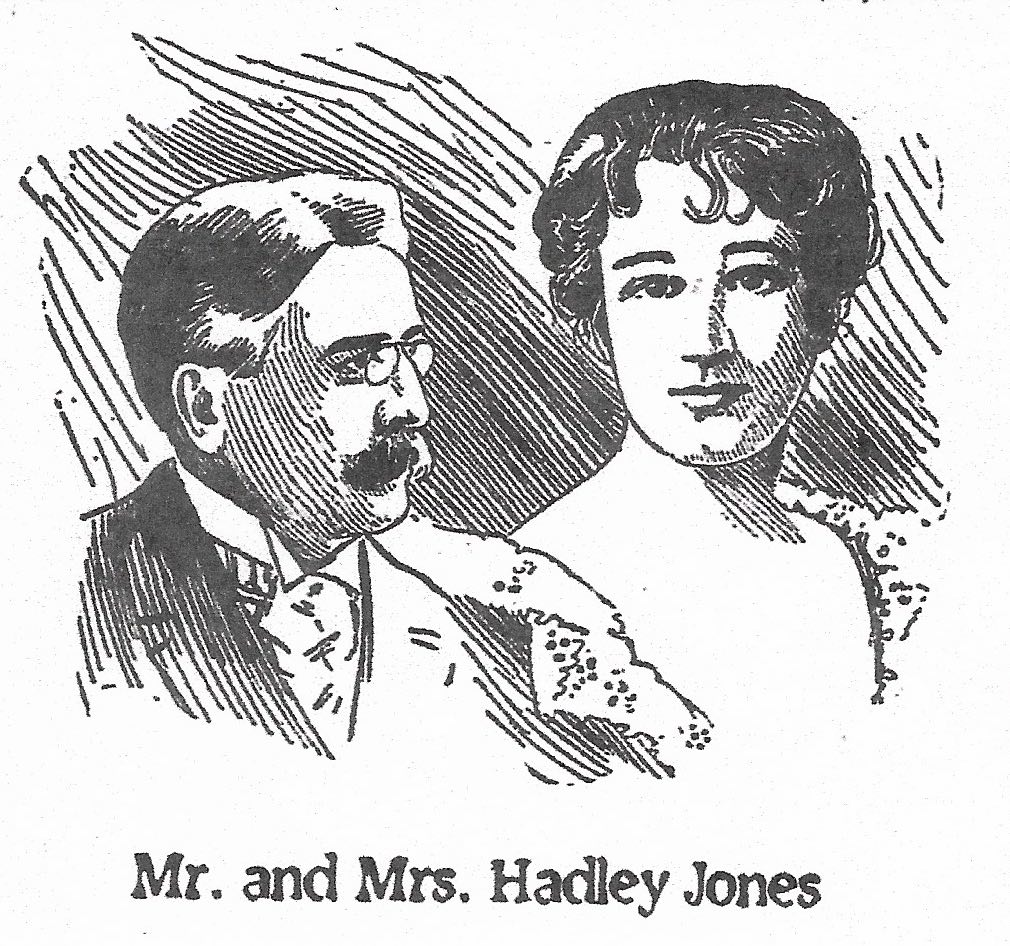 The writing was on the wall. Since there was no way of getting out of debt, much of it a result of illegal activities, Hadley Jones had a choice of, most likely, going to prison or to flee from Little Falls to parts unknown. His choice was to get out of town fast, with as much as he could. The exit was well planned.

Before everything “exploded,” Hadley went to Albany to meet an old friend from college days, Frank McLoughlin owner of the Globe Hotel at the corner of State and South Pearl streets. A letter from Jones to McLoughlin indicated that he needed money to leave the country and that he never could return to Little Falls again. In need of money, on April 11, 1901 Jones signed a bill of sale with McLoughlin for $1,350 ($46,500 in 2021) in exchange for his law library, personal effects, household goods, and his home on East Gansevoort Street. Additionally, McLoughlin received a bill of sale for $1,000 ($31,000 in 2021) in exchange for Hadley’s accounts against clients. When Jones’s foibles came to light, McLoughlin immediately went to Little Falls, collected what was legally his, returned to Albany and sold them at a significant profit.

With the new-found money, Mr. and Mrs. Jones went to New York City where they stayed at the swanky Grand Hotel in mid-town lower Manhattan. While in New York City, Hadley sent his wife, Emily, on a whirlwind trip back to Little Falls to collect their belongings. She arrived in Little Falls late at night and departed by train back to New York City early the following morning with two large trunks of personal belongings in tow, never to be seen again.

To add insult to injury, when they checked out of the Grand Hotel, Hadley paid the bill with a check drawn on the Little Falls National Bank for $169 ($5,200 in 2021.) The check bounced – Hadley had no money in his account

How did the people in Little Falls react to this big-time thievery and subsequent flight? Not as bad as what one might think! The city was initially in an uproar over the disappearance of the ex-mayor under uncomplimentary circumstances. There was general regret in the city over the matter.

From the beginning, Hadley’s warmest friends felt he would return to Little Falls and clear up the mess. They were of the opinion he was “a good fellow.”  However, after two weeks on the lam, and the appearance of more forged mortgages, public opinion began to turn against him. His close friends remained staunch in their support – he had not “hurt” the general populace or the local banks.

As far as Emily was concerned, it was a completely different matter. She was never scorned. She elicited the greatest admiration by all, especially the women of Little Falls and Herkimer County, for her devotion and loyalty to her husband. She had lost her home and her fortune, yet she stuck by her man. No one really knows her part, if any, in the scandal. It was said she only found out about it after their flight to New York City. Was she merely the obedient wife?

Hadley Jones was disbarred from the office of attorney and counselor-at-law in proceedings in Rochester in late 1901. His mother, Maria Grove Jones, filed for bankruptcy in 1902, with much of her indebtedness due to her having endorsed several of her son’s fraudulent mortgages.

Bankers from throughout the country, who had lost staggering amounts of money on the fraudulent loans, flocked to Little Falls to get a better understanding of the saga, and try to recoup as much of their losses as possible. A safe expert was brought in from New York City to open the safe in the National Bank of Herkimer County on South Ann Street. It was there the remaining counterfeit duplicate stock certificates were found.

But where had Hadley and Emily gone?  The National Banking Association hired the famous, world-wide Pinkerton’s National Detective Agency to find them. Their motto was: “We Never Sleep.” Reports filtered in that they had been sighted in Europe, South Africa, Argentina, and various countries in Central America. It appears though that Hadley had made his way from New York City to Honduras, a country in Central America that had no extradition treaty with the United States. He was untouchable!

Honduras was home to an infamous group of about one hundred swindlers, con-artists, scallywags, ex-bank presidents, former county treasurers, brokers, and municipal officials, all of whom were members of the notorious “Defaulters’ Club.” All had robbed lots of money. Although the members were well known by the Pinkertons, they could not be arrested for crimes committed in the United States.  Most of the fugitives lived in the capital, Tegucigalpa, while others lived in the smaller city of La Pimienta.  They lived lives of luxury. It was rumored, that while living there, Hadley was involved in the exporting of cocoa.

What about Emily? Local newspaper accounts on June 19, 1903 recorded that she was granted an absolute divorce from her husband, Hadley Jones, whereabouts unknown. The report went on to say she resumed her maiden name, Emily E. Neff. Problem is the initial report was in the Detroit newspapers without a mention of Hadley Jones. To bring more closure, it was widely reported that Hadley Jones died of a deadly “tropical jungle fever” in Honduras in 1903 – some say 1905.

End of The Story – Not Quite

Spokane, Washington is 2534 miles from Little Falls, New York, and 2892 miles from Tegucigalpa, Honduras (as the crow flies) and further away by boat. It was about as far away as one could get in the continental United States from Little Falls, New York. Spokane is where Emily E. Hughes moved to in 1903, soon to be followed by her husband, Richard H. Hughes. Richard had worked, in some capacity, in the booming mining communities of Rossland, British Columbia, Canada and Thunder Mountain, Idaho looking for gold. Some reports had him there as early as 1901. Think back to Hadley Jones’s interest in West Virginia mines back in the 1890s.

Emily worked as a secretary/clerk in the Spokane Department of Health. She must have had a responsible job since there are newspaper accounts of her appearing in court cases testifying on behalf of the department. She worked at the Department of Health from 1903 to 1912.

Richard H. Hughes, then nicknamed “Bliz,” had a varied career in Spokane. We do know that in 1907 he had a small insurance policy made out with Nelson Rust Gilbert of Little Falls as beneficiary. The Federal 1910 census shows him renting a home in Spokane at 430, Pine Street with Emily, his wife of 13 years. He was the assistant secretary of the Spokane Chamber of Commerce. Prior to 1910 he had worked on the news staff at the Spokane Daily Chronicle. Emily was still with the Health Department. He next went into a business partnership with Roscoe Couper to form the Northwest Storage & Transfer Company.  He sold his share of the company to Couper in 1912. Around this time Richard and Emily had a shop, “The Acme Letter Shop,” someplace in Spokane, most likely attended to by Emily.

The 1920 census lists Richard and Emily, still renting in Spokane, but now with a boarder. Richard was once again in the mining business in Thunder Mountain Idaho. In 1930, Richard was appointed a bailiff in Federal Judge J. Stanley Webster’s court, a position he retired from in 1933 at age 75. How ironic, a man who was a thief and evaded the law most of his life, retiring as a federal law enforcement official.

Emily E Hughes, widow of Richard H. Hughes, passed away in Spokane on May 24, 1941 at age 69 after an illness of three months. Her obituary indicated that she was born and reared in Philadelphia and was educated abroad. As with her husband, she was buried from the Smith Funeral Home and the Cathedral of St. John the Evangelist. No children or near relatives survived.

Searching the Spokane cemeteries on-line, I was not able to find where Richard and Emily Hughes were buried. I had the Smith Funeral Home in Spokane check through their records, but they could not find any burial location(s) for Richard or Emily Hughes. It turns out that they were not buried. A further check with the secretary at the Cathedral of St. John the Evangelist in Spokane revealed that Richard died of “angina pectoris” (heart attack) and Emily of a “cerebral hemorrhage” (stroke). The church records indicate that both Richard and Emily were cremated with no records of how or where their ashes were disposed. A search of unclaimed cremains handled by the Spokane County Medical Examiner’s Office since 1911 showed no entries for Richard or Emily Hughes. So where had their ashes gone?

What about the ashes ending up in Little Falls? A thorough check of the Church Street Cemetery records showed no Hadley Jones or Richard Hughes. The Jones family plot only has the remains of father Dewitt Jones (1912,) mother Maria Grove Jones (1917,) and brother Eugene Jones (1916.) A mystery continues.

Was Richard H. Hughes really Hadley Jones?   All indications are the answer is definitely “Yes.” All the names and dates and places fit. Once he was in inescapable debt, Hadley devised an elaborate scheme to avoid jail, and pulled it off. His wife, Emily Neff Jones, remained true to him through thick and thin – loyal to the end. They died not wealthy, but people of modest means. And most telling that Richard Hughes was indeed Hadley Jones was his obituary. Richard H. Hughes’ parents are listed as Dewitt Hughes and Maria Grove Hughes. Hadley’s parents were Dewitt Jones and Maria Grove Jones!  Not a coincidence – he honored his parents. And finally, the picture of an older Richard Hughes in his obituary in Spokane, and one of young Mayor Hadley Jones in the Little Falls Evening Times are strikingly similar.

Did the people in Little Falls know what was really going on? Again, it appears that some of his closest friends and business acquaintances were aware of the situation, and they were in contact with him in Spokane. However, there was no mention in the Little Falls newspaper regarding Richard H. Hughes’ (Hadley’s) death.

Why would Richard H. Hughes in Spokane, Washington have taken out a $1,000 insurance policy ($27,000 in 2021) with the beneficiary Nelson Rust Gilbert in Little Falls, New York who was Hadley’s (Richard’s) former law partner and the best man at his wedding in 1897, if they had not been close friends at some point in their lives? Gilbert passed away in 1927, eleven years before Hughes (Jones), and the insurance policy passed on to his wife Mary Annette Gilbert and later to his daughter, A. Lillian Gilbert. Nelson Rust Gilbert, in his life-time, had become one of the wealthiest and most influential men in Little Falls, and was himself mayor of the city in 1920-1921.

Certainly, Hadley never came back to Little Falls, but I wonder if any of his friends ever visited him in Spokane?

What would Hadley’s and Emily’s lives been like if the Sutcliffe Brewery saga had not played out the way it did?

Was Hadley Jones a saint or a sinner?  You be the judge.

Louis Baum is a member of the Little Falls Historical Society